Things have been very quiet on the advance of legalized Sports Betting throughout the United States recently. Then again, with fewer sports currently taking place, it’s likely that it hasn’t been at the forefront of lawmakers’ minds. That’s why it’s always great to hear of another state moving forward with the introduction of sports betting. So which of the 50 states is now bringing sports betting to its residents? That would be Wyoming, thanks to the Northern Arapaho Tribe.

In a similar way to the launch of sports betting in New Mexico two years ago, which occurred thanks to the state’s Pueblo of Santa Ana Indian tribe, it's a tribal gaming operator that's leading the way. This new form of gambling will be operated from within the Wind River Reservation, and it is expected to be made available a few months from now. 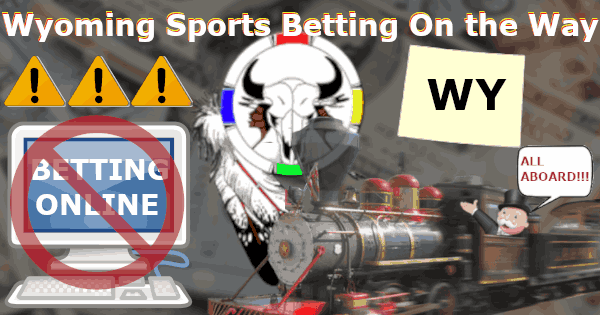 The announcement of the introduction of Wyoming sports betting has brought hope to tribal leaders who are looking for it to help out with lost revenue of the three casinos owned by the Northern Arapaho. Following months of closure due to COVID-19 lockdowns, a large amount of income has been lost by the casinos, and Brian Van Enkenvoort, who is the CEO of the Wind River Hotel and Casino, spoke of the tribe bringing a unique experience to its casino patrons.

Van Enkenvoort spoke of a well-regulated sports betting sector being a great way of making gaming “even better for our customers.” He was also quick to point out that sports betting cannot be found elsewhere within the state of Wyoming, making it an amenity that is unique to the tribe’s casinos.

However, the introduction of sports betting through these tribal casinos is not particularly a traditional way for such to be made available. There has not actually been a Wyoming state law passed legalizing sports betting, and this is something that remains true even after the creation of the Wyoming Gaming Commission. The Commission is what regulates “skill-based” games and was brought into being earlier in 2020. How is it possible then that the Arapaho can introduce residents to sports betting so easily?

Arapaho Operating Outside of State Regulation

In most areas of the United States of America, even if tribes are providing gambling opportunities, they still need to operate within the laws of their respective states: usually by signing compacts with the governor to allow various types of gaming on tribal lands. However, when it comes to the Northern Arapaho Tribe, they do not operate their casinos via any sort of compact with Wyoming.

Instead, the WY casinos were set up under federal regulations determined by the U.S. Department of the Interior. This unusual arrangement was the result of years-long legal battles that were resolved in 2005 with a federal court finding that Wyoming had not negotiated in good faith with the tribe regarding a gaming compact. Therefore, the laws of Wyoming where gambling is concerned do not affect the Northern Arapaho Tribe in any way.

Looking back to the sports betting launch in New Mexico in 2018, this was done in a very similar way, and it has been accepted in nearly all quarters. A clear provision in state law to ban sports betting via tribes has not been introduced there. That’s not always how things play out though as Oklahoma is all too well aware of.

Earlier in 2020, the Governor of Oklahoma, Kevin Stitt, made the move to add sports betting to new compacts formed with the state’s tribes. However, he was ultimately sued by a couple of the state’s lawmakers and completely overruled by the Oklahoma Supreme Court. Stitt remains active in seeking out another hearing with regard to the compacts with Oklahoma’s tribes, but for now, sports betting has not been introduced within that state.

When asked about the Northern Arapaho Tribe’s plans to introduce sports betting at their three casinos, the office of Wyoming’s Governor Mark Gordon gave no response.

Murphy Case and Its Impact on Sports Betting

It was in May 2018 that the U.S. Supreme Court issued a decision regarding the Murphy v. National Collegiate Athletic Association case. That decision saw it overturn the Professional and Amateur Sports Protection Act (PASPA), which had blocked states from being able to expand any sort of legal sports betting opportunities. Once that legislation was overturned, states had the ability to introduce their own sports betting laws and allow their respective residents to access these gambling options from within their borders. 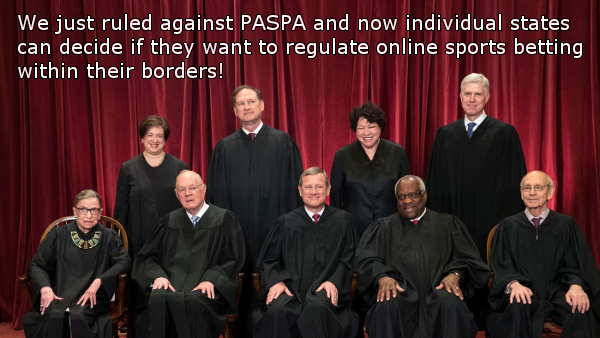 Wyoming is not one of the states that has proceeded forward with legalizing such options though. While bills were introduced once or twice, they weren’t really touched by lawmakers, and therefore, the sports betting landscape has remained pretty much unchanged in The Cowboy State.

That’s quite a shame as Wyoming is the tenth-largest state within the United States. That being said, however, it is also the smallest in terms of residents with just 579,000 inhabiting it. While this may not make it quite the prize for the sports betting industry, the debut of sports betting will likely help the tribal casinos.

Wind River management has faith in sports betting and claims that it is something that patrons want to participate in. Northern Arapaho Business Councilman Stephen Fasthorse hopes that the way this gambling opportunity is being provided won’t damage relations between the tribe and the state. Instead, he looks towards the tribe’s sports betting endeavors as potentially being a model for state leaders should they elect to expand gaming in Wyoming in the future.

“We extend an olive branch to the state of Wyoming, the Governor, and the legislators who are advocating for gaming,” Fasthorse said. He continued on by noting that tribe is considered to be experts with regard to gambling before stating that the Arapaho would like to look into partnerships that would be “beneficial to both the tribe and the state.”

Wyoming Sports Betting in the Works for a While

Commenting on the decision of the US Supreme Court to overturn the PASPA law in 2018, Fasthorse said that the move had cleared the way for the tribe. He explained that they had been keeping sports betting possibilities in their “back pocket” since the Supreme Court decision.

However, it was only in the spring of 2020 that the decision was made to proceed forward with sports betting now that the Wyoming Gaming Commission has been created. Of course, the COVID-19 pandemic hit and caused widespread chaos for the gambling world. Despite measures being taken to try and combat the spread of the virus, many casinos around the globe were shut down for a period of time. Therefore, the addition of sports betting to the tribe’s three casinos will help them to not only regain revenue but maintain a level of “exclusivity.”

If the Arapaho Tribe is successful with its sports betting efforts, then wagers will only be accepted at the land-based casinos. Online sports betting is not a part of the setup, so you shouldn’t expect to find any brands offering their services this way. The tribe's sportsbooks will likely be powered by a system from International Game Technology.

Throughout the United States, over a dozen tribal nations have taken the opportunity to launch sports betting operations since the overturning of the 2018 PASPA law. These include tribes within Montana, Colorado, and the aforementioned New Mexico. The overwhelming majority of these Native groups, though, have only proceeded with operating sportsbooks following some kind of agreement with the state.

According to reports, the introduction of sports betting has been a generally positive experience for those tribes. Besides the actual “hold” on betting action garnered by the sportsbooks themselves, a lot of additional revenue has come from sports bettors frequenting on-property restaurants, shops, and hotels.

It is Fasthorse’s intention to create a sportsbook atmosphere that is similar to what can currently be found on the Las Vegas Strip. For the moment, the Arapaho Tribe has some regulatory requirements to satisfy with the National Indian Gaming Commission. However, it was noted that sports betting could be operating within Wyoming at the Wind River Hotel and Casino by the time the 2021 Superbowl occurs in early February.

It’s great to see that brick-and-mortar sports betting will become available to bettors within Wyoming, but it will only be accessible from a very few locations. If you want to bet wherever you are using your computer or mobile device, then we advise you to set up an account with an offshore bookmaker instead.

There's nothing illicit or shady about availing yourself of the services of an international sportsbook. All the laws that deal with this subject penalize only those providing and managing the gambling sites, not individual bettors. Read this list of the top U.S.A.-friendly online sportsbooks for more info.

If you'd rather play poker, then rest assured that there are a number of reputable internet poker rooms that serve Wyoming. Simply read up on all of them and then pick the one that seems best to you. If you reside elsewhere in the United States, then you can instead check out this guide to the best U.S. online poker rooms.