We here at ProfessionalRakeback are always on the alert for industry developments that could affect our readers. Our interest was therefore piqued when we found out that BetOnline (and by extension, the entire Chico Poker Network) had a new tournament director.

BetOnline Dan, who previously worked as tournament director for the Winning Poker Network, has some ideas about how to improve the tourney schedule at BOL. We caught up with him on Oct. 10, 2020 for a ProfRB exclusive interview so that we could report back to you on the changes that he has in mind to make BetOnline an even better place for poker going forward. 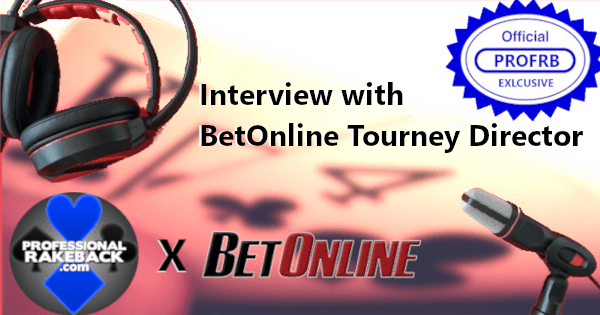 Keep reading our interview with the BetOnline tournament director to get information on what to expect tournament-wise from the Chico Poker Network.

ProfRB: As the new tournament director of the Chico Poker Network, what aspects of the current tournament schedule jump out to you as areas for improvement? What is your current plan for making changes to the existing tournaments on the site?

BOL TD: The schedule, in my opinion, isn't consistent in the sense there are too many gaps and it doesn't flow as it should. I will be changing the structures to more modern-day structures and will be keeping them the same as they previously were in terms of average running times.

However the structures will be smooth throughout. My plan is to have a new schedule – all being well – ready by January whilst I learn the trends and behaviors of the new player base that we have.

I already have some test tournaments running to see how they perform and will be making small changes here and there as I see what will help the current schedule perform better.

ProfRB: The Chico Poker Network has not historically featured large tournament series although this has changed a bit in the past couple years with the MICRO and COPS MTT series. Are there plans to have a more robust set of recurring series?

BOL TD: We are running another COPS series, which will be my first schedule as TD for BetOnline, from Nov. 8 to 22. I am almost finished with the schedule to be sent over for approval. It will be very different to previous series as I have tried to plug in the gaps with the current schedule instead of just having the current schedule bigger. So the total GTD may be slightly smaller but the overall GTD of all tournaments will be very much bigger.

ProfRB: Do the sit-n-goes and Windfalls fall under your responsibility too? Anything in the works for these formats?

BOL TD: Sng's and Windfalls will fall under my responsibility, yes. I have some ideas, but they are not priority although I made one change to the Million Special Windfall from 1000 ss to 500 ss. At 1000 ss, it was just too deep and didn't fit in line with the industry standard structure.

ProfRB: At one time, there were about a dozen freerolls each day at BetOnline, but they were removed perhaps a year ago. Are there any plans to reintroduce some way for players to build up a bankroll from nothing?

BOL TD: I haven't looked at freerolls just yet, but that would come as a business decision on what to offer and how to structure it. I can't really comment on the future of freerolls too much.

ProfRB: A lot of players have been disappointed by the removal of tournaments that accepted VIP point buyins. Are there plans to reintroduce MTTs that players can use their points on?

BOL TD: Yes, even before I started here, I saw the complaints with VIP points. There are many discussions going on with regards to the best way moving forward regarding points, etc. It's not a conversation where I have had too much input as I'm very new and still finding my feet, but I do know there are discussions going on.

ProfRB: The “Contests” section of the poker client seems a bit barren at present. Can we expect leaderboards or some other type of MTT promotion to appear?

BOL TD: As a company, we are very focused on helping the poker economy, and when running leaderboards and promotions, we really think about how to help recreational players enjoy their experience more and keep their money lasting longer, which I believe is good for poker in general. And my future plans also fall in line with being good for poker and the player economy as much as I can.

ProfRB: Player feedback is an important part of creating successful tournaments as I am sure you will agree. What is the best way for users to leave suggestions or comments regarding tourney improvements they would like to see implemented?

BetOnline Dan left us with the following concluding words:

I know BOL have hired some very, very good people with a lot of experience in the industry from very reputable companies, which I would like to include myself in that (if I can). We really are all on the same page in what we want for the future of the company and poker in general. We may not guarantee the most money, but my plan is to really help poker and offer a great schedule.

We appreciate the time BetOnline Dan took to chat with us and answer our questions. We certainly hope he is successful in turning the Chico Poker Network into one of the top destinations for tournaments online.

You Can Play on the Chico Poker Network Now

If you're eager to sample the tournaments on the Chico Poker Network, then you can read a fact-filled BetOnline review to gather more info and learn how to sign up. There's a sister site called Sportsbetting.ag that has all the same games as BoL. If you're a non-U.S. player, you can access the tournaments and ring games through the TigerGaming skin.