On Thursday, Oct. 1, the province of Alberta, Canada unveiled its new government-operated and -regulated online gambling site. Called Play Alberta, it is run by the Alberta Gaming, Liquor and Cannabis Commission (AGLC) and powered by NeoPollard Interactive. 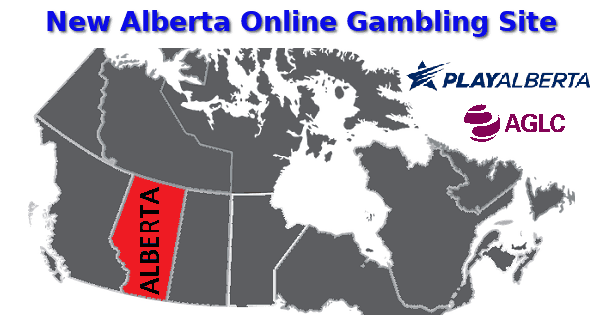 Back in February 2019, we reported on the fact that Alberta was seeking RFPs for a tech partner to assist it in creating a real money online gaming platform. Then following a period of contract negotiations, NeoPollard was announced as the winner in June 2020. The current agreement extends for 7 years with an option to extend it by another 12 years.

The AGLC Is the Owner and Operator of PlayAlberta

NeoPollard has already worked with several U.S. states, like Michigan, Virginia, and New Hampshire, to provide them with iLottery solutions. Notably, NeoPollard joined in the suit that New Hampshire filed against the Department of Justice challenging the DoJ's 2019 reinterpretation of the Wire Act, which could have repercussions for online lottery sales in the United States.

Provincial leaders speculate that the Casino will bring in $3.74 million in 2021 and $150 million during its first five years. We believe that these projections are unduly optimistic for reasons that we'll go into below.

About the Play Alberta Site

The PlayAlberta.ca gaming portfolio is available to residents of Alberta. They must be physically located within the province to register an account or play any of the games for real money. The minimum age to play is 18.

The site loads up in web browsers, so there is no need for downloading and installing an application. This means that it's compatible with a broad array of desktops, laptops, phones, and tablets. 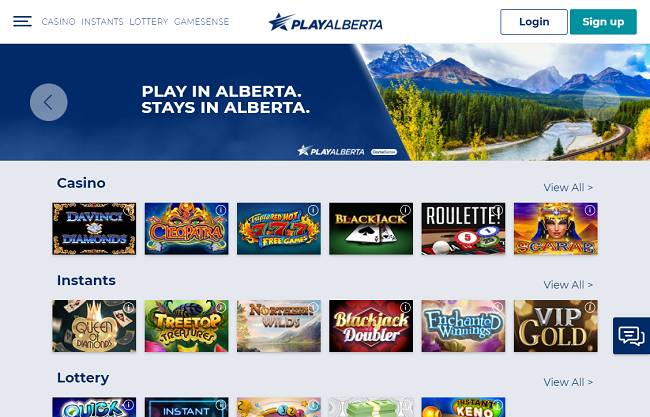 The titles at Play Alberta are divided into three categories: Casino, Instants, and Lottery. Casino contains the familiar forms of casino gameplay that you would expect, like slots, blackjack, and roulette. Instants is comprised of various keno, scratchcard, and instant-win selections. Lottery has a few additional keno, draw, and scratchcard games.

Although the menu at Play Alberta includes some prominent hits, like “Cleopatra” and “The Price Is Right,” both from IGT, the overall lineup of casino thrills is a bit lacking. Most of the basic staples are present, but there are a few noteworthy exceptions, like Craps and Pai Gow Poker.

In total, there are 30 entries in the Casino area, 15 in Instants, and a mere 5 in Lottery. Actually, there are fewer 50 games altogether because some of them are listed in more than one category.

Regarding other product verticals, there are none. Despite being managed by a lottery vendor, Play Alberta doesn't let users purchase lottery tickets. There's also no poker or sportsbook although a banner on the site indicates that betting on sports is coming soon.

Even for a new enterprise, the Play Alberta gaming setup is a bit weak. There are indications that it will be expanded going forward, but until that happens, the paucity of games offered will likely not be enough to satisfy most potential customers.

There's only one promotion listed on the PlayAlberta.ca website, which is a $20 welcome bonus upon making a deposit of $10 or more. The 200% match is pretty good, but the bonus size of just $20 is very modest compared with what other internet casinos provide.

This $20 bonus must be wagered through 20 times for a wagering requirement of $400. However, table games and video poker only contribute 10% of the amount bet, so the effective WR for the most advantageous games is $4,000 or 200x: a pretty steep playthrough to meet.

Given that the operator is conducting business with the full backing and approval of the provincial government, one would expect it to be able to process transactions through a broad range of deposit and withdrawal channels. After all, this is the case in other regulated online gaming jurisdictions, like New Jersey.

However, Play Alberta only allows deposits by Visa and MasterCard while sending players' winnings solely via electronic bank transfer. This lack of flexibility may deter people who don't use credit cards or who don't wish to mix together their personal bank account funds with money from online casino wins.

There's something else worrisome about cashouts at this site. Within the FAQ entry “How do I withdraw my winnings?” on the PlayAlberta.ca website is the following line:

NOTE: Please keep in mind that you are only able to withdraw account winnings and not deposits made; this is a security measure used to prevent fraudulent deposit and withdrawal requests.

This is a confusing sentence. It could mean that any deposit you make must be bet through once before making a withdrawal. This would be a fairly standard term that's present also at many other internet gambling destinations.

An alternate reading of this text, however, implies that you can never withdraw the amount you deposited. We're almost certain that this is not what is intended, but this language could be easily misinterpreted and lead to potential visitors abandoning the site with haste.

A minor point that we noticed while examining the Play Alberta casino for practice chips is that every game has a RTP (Return to Player) percentage listed in the game information window. But this figure is rounded to the nearest percent! 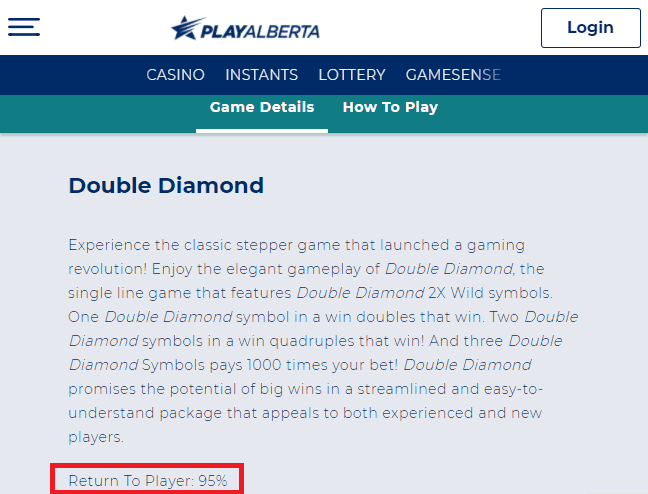 For example, the Jacks of Better video poker game, which employs a full-pay schedule, ought to show an RTP of 99.54%. This is displayed simply as “99%.” It's the same story with Blackjack and Baccarat both of which show an RTP of “99%.”

It appears that Play Alberta is rounding down all fractions of a percent because if it was rounding, up or down, to the nearest percent, then Jacks or Better and Blackjack would have to be listed as 100% RTP.

Curiously, several of the games include help screens created by the developers wherein the true RTP is available for viewing. These numbers extend two places to the right of the decimal point. So the programmers of these titles have provided accurate metrics regarding their games, which the AGLC has, for whatever reason, opted to truncate. 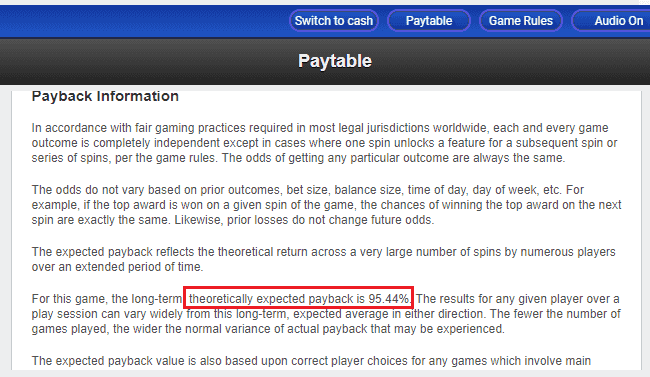 Within the Double Diamond Slot, a Paytable Window Shows a 95.44% RTP

Poker on Its Way?

Although nothing solid has been promised, provincial leaders have dropped hints that poker may be added to Play Alberta at some point. With a population of just 4.4 million, it's probable that the province will not be able to host a sustainable online poker room especially given the strong competition coming from the likes of PokerStars, PartyPoker, 888poker, et cetera.

It's possible that the AGLC has designs of entering the inter-provincial traffic pool maintained by the provincially run poker sites in Quebec, British Colombia, and Manitoba. This operation has its issues though, like the fact that it relies on outdated software. Even with a combined population of 14.5 million to draw upon, this network only has enough player liquidity to rank 31st in the world according to industry resource GameIntel. It's unlikely that the addition of Alberta's 4.4 million populace would make much of a difference.

With the inauguration of PlayAlberta.ca, there is only a single remaining province that does not have any form of province-controlled internet wagering: Saskatchewan.

Much attention has been focused on Play Alberta being a fully regulated and legal wagering service, kind of implying that others are illegal. This isn't really true though.

The laws that deal with this subject are, for the most part, applicable throughout Canada rather than being specific to Alberta or any other sub-national jurisdiction. They only make it a crime to run an unlicensed gambling business if it has a physical presence within Canada's borders. Therefore, offshore poker rooms, casinos, and sportsbooks are totally OK from a legal perspective.

There's nothing at the Canadian federal level comparable to the Wire Act or the UIGEA in the United States. There never was a Canadian equivalent of the Black Friday persecutions of online poker firms; the legal and legislative tools to enable such ill-conceived enforcement actions simply don't exist in The True North, Strong and Free.

The individual provinces can, if they wish, launch their own internet real money wagering parlors. Yet, they're not permitted to exercise monopolistic control. They must compete for market share with privately held entities – an endeavor in which most public-sector businesses fall flat on their faces.

Choose a Better Place to Play

Unless and until Play Alberta gets its act together and enhances its offerings significantly, there are superior places for Albertans and all Canadians to get their fill of online gaming. Check out this Canadian offshore poker guide for tips on where to play and how to sign up.