The Cabal of Eight II Pt.19: The Dragon & the Wasp 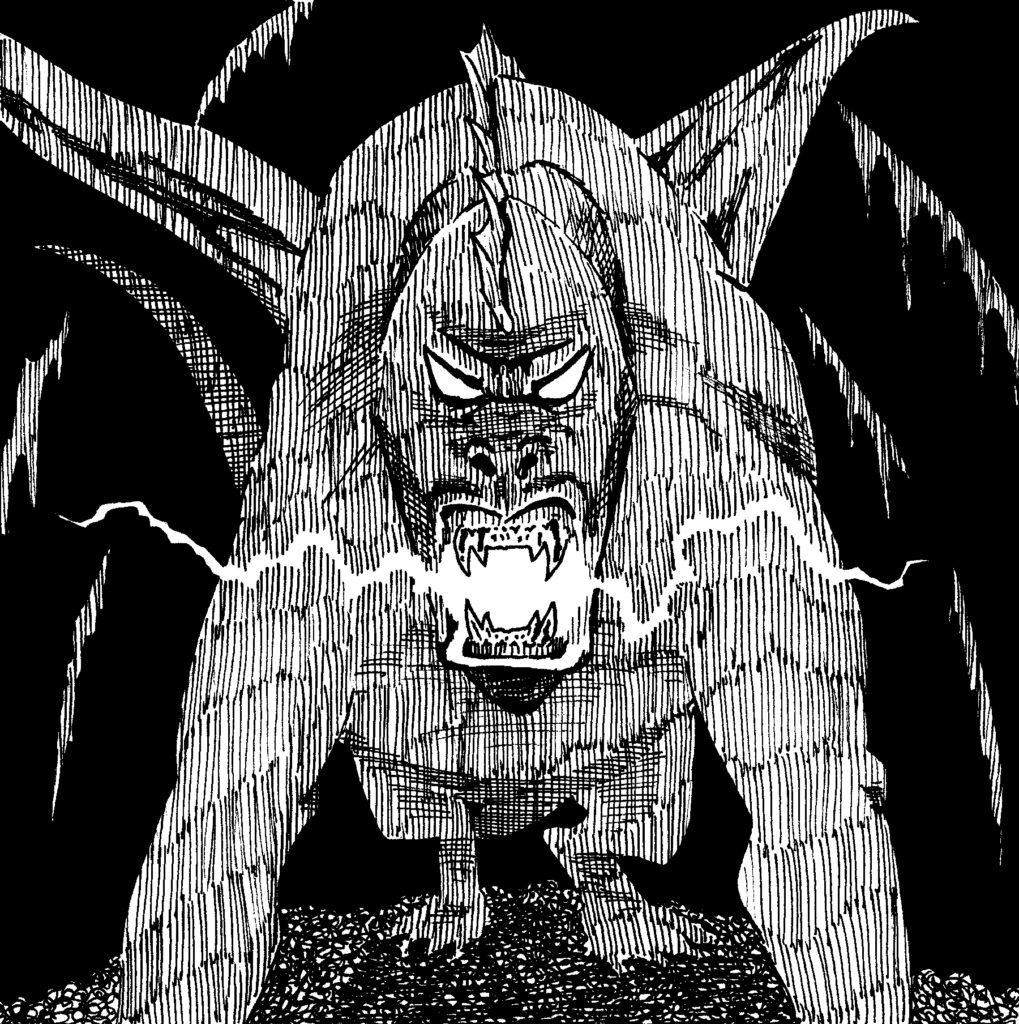 Excor (played by Cris) under the influence of the Ghost Form and Invisibility I spells trailed just behind the blue dragon-shaman as he in turn followed the blue lady into the caves from the dusty tunnel. The blue-lady was sniffing the air, apparently tracking the others via scent quite accurately.

Meanwhile, Fauna (played by Jenn), Szoo (played by Isis), Bumble, and Xanto the Wasp were picking themselves up from the wet gravel beach they had landed on after sliding through a slimy chute and over the edge of a 10 ft. cliff.

Szoo: “Hey! At least she can’t follow us through that chute!”

The GM (me): “Um, you guys know she can transform back and forth from human form so…”

The Wasp chanted a spell and giant wasps appeared under him and Bumble his apprentice. The pair rose above the heads of their former two companions and began flying over the reeking green body of water before them. It was at this moment that Szoo realized that the Wasp was cradling the case. Szoo had forgotten to pick it back up after sliding down the chute distracted by his concern over the dragon.

Suddenly a deafening roar shattered the quiet atmosphere of the cavern. The four mages could see the glowing eyes of the blue dragon in her full draconic form just 20 ft. southwest of them on another bank of gravel & sand.

Excor moved in range of the Dragon Shaman, both still in the passage coming out of the previous cavern (R5 on the map) into the water chamber (R8 on the map). He began to cast Force Ram but fumbled the casting. His invisibility spell dispersed. Fauna rushed to the water’s edge and shouted for Szoo. The Wasp and his apprentice flew their steeds further north turning just in time to avoid hitting the cavern wall.

The blue dragon’s throat swelled and glowed intensely blue before she unleashed a massive blast of lightning at the two wasp-riders. Bumble easily dodged but the bolt hit the Wasp and his mount blasting it to smithereens causing him to drop splashing into the water below. Szoo transformed into a large black sea turtle and began to slide into the water. The Dragon-Shaman spat a lightning bolt at the ghostly form of Excor but it passed harmlessly through.

Excor cast Slow on the Dragon-Shaman but the shaman resisted the spell. Fauna leaped onto the back of the turtle as it slid under the water. The Wasp meanwhile was swimming to the beach immediately to his west his white knuckles still clutching the case. The Blue Dragon jumped into the water plowing through it like a giant shark heading straight for Xanto. She snapped her jaws at the turtle and his unfortunate passenger but the turtle dodged by the slightest margin (by 1 point). The Dragon-Shaman charged Excor and swung his quarterstaff at the adventurer, the blow passing straight through. The Dragon-Shaman looked up possibly re-thinking his combat strategy.

Excor backed up and cast Force Ram again targeting the Dragon-Shaman. The Dragon-Shaman dodged to the side taking a glancing blow. Fauna jumped off the turtle and clawed her way onto the beach near the Wasp (R7 on the map). The Wasp checked the case; it was intact and still sealed. The dragon swam up near the beach on which the Wasp and Fauna were standing rising like a titan from the water. The Dragon-Shaman began casting a spell but a stitch in his bruised side caused him to falter and the spell fizzled.

Excor cast paralyze II on the shaman paralyzing him.

The Wasp took a stance meant to increase agility and focused his light-starved eyes on the dragon before him. The Blue Dragon surged forward to stomp on him but he easily evaded the blow. Szoo as he was right next to the Wasp forced to dodge as well wound up on the opposite side of the monster from that of the Wasp. Bumble flew her giant-wasp-mount over the dragon’s head in an effort to get near her master. Grinning maliciously, Excor canceled Ghost Form and pulled out a magic dagger (+5) and stabbed the paralyzed Dragon-Shaman in the throat but failed to kill him in a single blow. Fauna moved around next to the Wasp.

The Wasp took the same stance and readied. The Blue Dragon blew its breath at both the Wasp and Fauna. Both managed to avoid the lightning bolt completely. Szoo transformed back into his true form and withdrew his Fire Fang (see The Cabal of Eight II Pt.1: The Checkered Eye). Excor again buried his dagger in the Shaman’s throat this time mercifully finishing the job with that final blow. Fauna dissipated into a cloud of mist as she cast Gaseous Form on herself.

The Wasp again took a defensive stance but was also able to quickdraw a scroll from his sleeve. The Dragon snapped her razor-studded jaws at the Wasp missing by a hair. Szoo moved further around to the opposite side of the dragon from his companions and blasted the dragon with a cone of fire from the tooth, to no effect. Bumble flew down next to her master.

Excor looted the still-warm corpse of the dragon shaman. Fauna, in gaseous form, floated up to the dragon’s face, flew up her nostrils, and immediately canceled her spell.

The Wasp leaped onto Bumble’s wasp-mount and read the scroll. A golden glow surrounded him and his apprentice as they began to fade away. Reflexively the dragon sneezed shooting the druidess from one of her nostrils directly into the area of the teleportation spell. In a flash, the Wasp, Bumble, and Fauna were gone.

Immediately, the Dragon swiveled around and grabbed at Szoo who was barely able to avoid the massive claw. Meanwhile, Excor after packing away the loot in his portable hole twisted his silver ring activating the ghost form spell as he rushed towards the commotion. Szoo activated the Temporal Jump ability on his phoenix feather cloak and took a step into nothing completely disappearing. The dragon sniffed around then as she turned to leave, she spotted the faintly glowing ghost form of Excor standing on the opposite shore.

The dragon charged him and stomped around snarling and proclaiming herself “the ocean of the desert” and “the great queen of the mountains, pale yellow forests, and desert sands”. After a few minutes, she lowered her face to his ghostly visage and growled, “I’ll track down that lowly wasp and crush him slowly beneath my feet and then when I reclaim my property, I’ll find all of you!” Excor just shrugged and waved goodbye. The dragon stomped off.

Cris: “Pfft! She can’t do anything! The Ghost Form on my silver ring lasts for over an hour!”

After waiting a few minutes, Excor started on his way back up unexpectedly joined by Szoo. Together they decided to rent a room for the night in a place called the Shield & Helm Inn near the new amphitheater on the corner of Arena Circle and Tourney Way. They paid the 10 gp for the night and an additional 20 gp for a security detail. Not soon enough did they both collapse exhausted, bellies full of wine and food, onto their soft feather beds.

*And yes dear reader, Fauna the Druid did transform into mist and then went up the dragon’s nose in the game. It worked to stall out one of the dragon’s turns although she did have a chance of falling back into the throat and getting swallowed. I did roll for that.

The post The Cabal of Eight II Pt.19: The Dragon & the Wasp appeared first on Ranger Games Publishing.

What Can Roulette Teach Us About Business?

The Cabal of Eight II Pt.19: The Dragon & the Wasp