Do you like funny ringtones? For example, the ones that make duck sounds? Or maybe a hen? We have an idea where to find those! In the article down below we collected the Animal sounds ringtones apps.

Ecosusi – 15% off ECOSUSI women’s bri…
11 Unforgettable Things to Do in Beli…
Jam.GG – Play Retro Games online with…
How come so many Christians don’t rea…

And more ringtones apps that include not only Animal Sounds, you will find in this article.

The app contains a wide variety of animal sounds that you can immediately put on your phone ringtone, contact, SMS, or alarm tone.

The application has an animal search that works instantly for each letter.

All ringtones are divided into ten groups of animals:

That’s quite a selection, isn’t it?

Each animal sound comes with a couple of ringtone options. If you’re interested in learning more about an exotic animal, there’s a link to a Wikipedia page about that animal in the corner of each ringtone.

Each ringtone can be added to favorites, which creates a separate group of added ringtones. 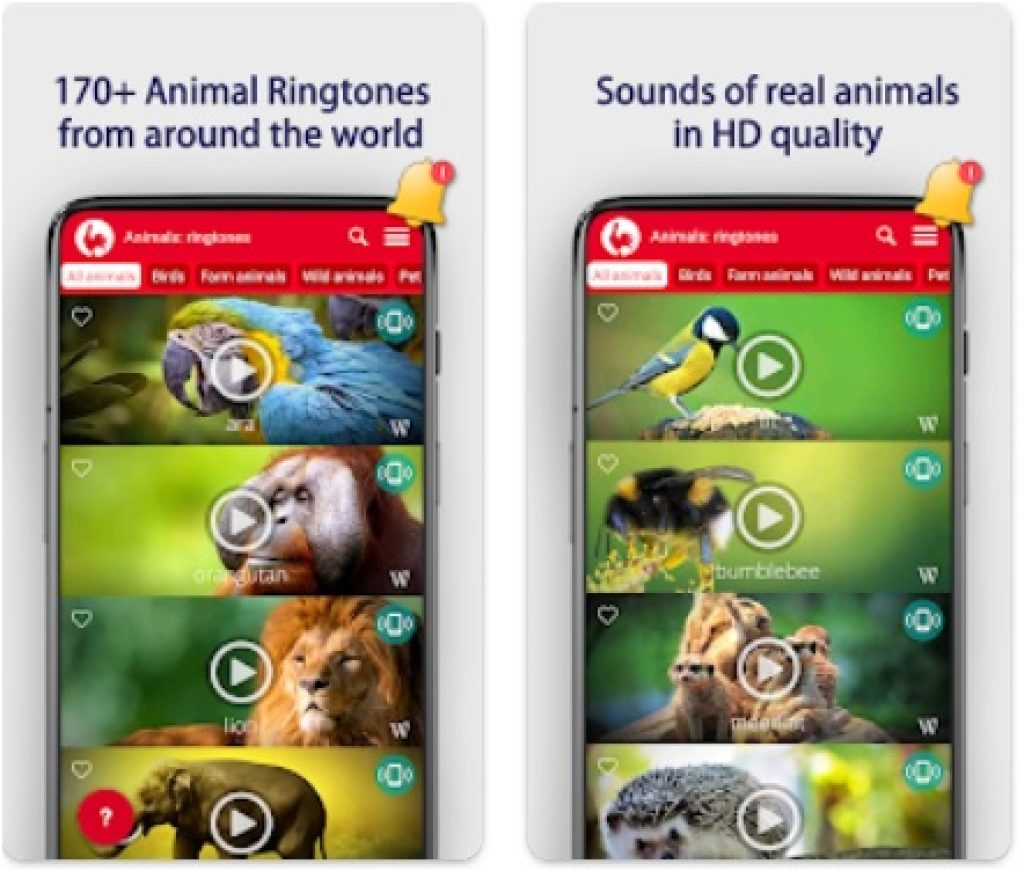 You may also like: 8 Best Female to Male Voice Changer Apps for Android & iOS

The interface of this app is similar to Animals: Ringtones and Melodies, but there are eleven tabs with animal species. In addition to all of the above, there are also dinosaur sounds.

Yes, yes, that’s right, dinosaur sounds of good quality. If you want to find a specific animal, there is a search box at the top, which quickly reagents and finds the right animal.

But compared to Animals: Ringtones and Melodies, there are far fewer ringtones per animal. For example, if the dog had ten options in the last sentence, here there are only four. But there is a big gallery with the wallpaper of any animal. For each animal, you will find dozens of wallpapers for all tastes.

Also, for each animal, you can read information from Wikipedia and add the animal to your favorites. 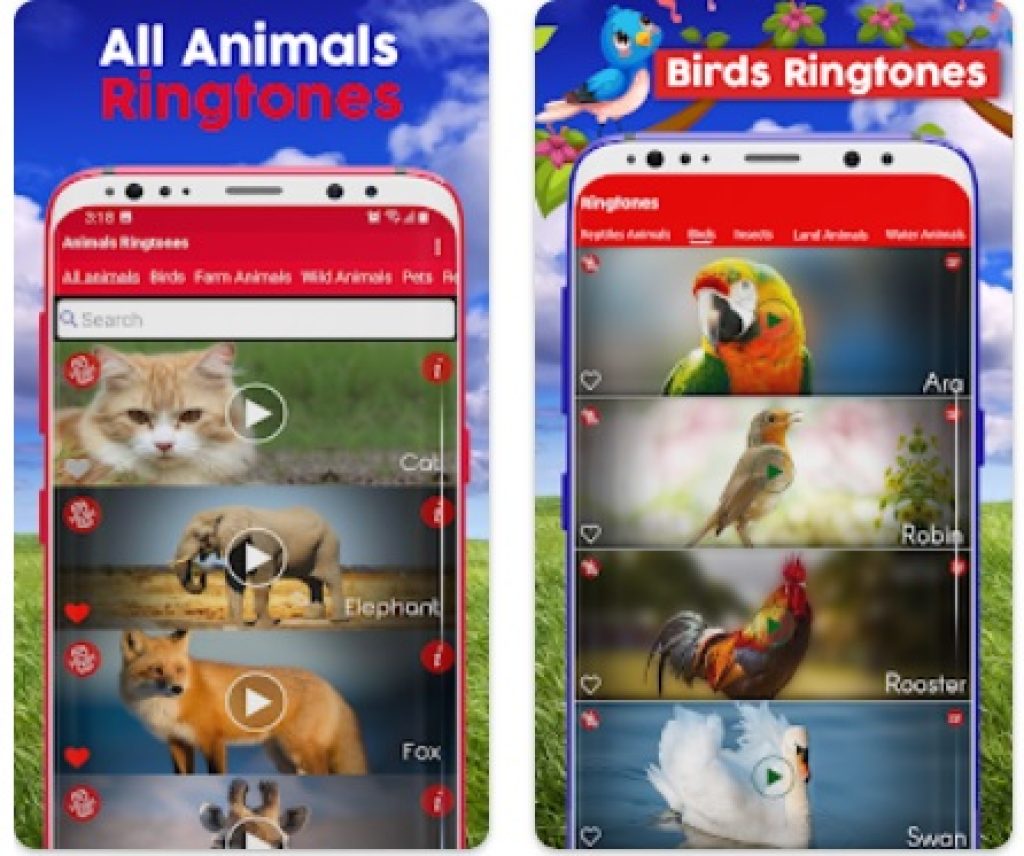 Application with a very nice interface and smooth animations. You can switch between the categories of animals with both clicks and swipes. The current animal category is underlined and highlighted with a different letter color.

You can also switch between animals with swipes by clicking on the picture of the animal. You can also enable autoplay here so that you don’t have to click every time you swipe.

You can put the picture you like on the wallpaper, and the sound you like, the application puts on the selected option. 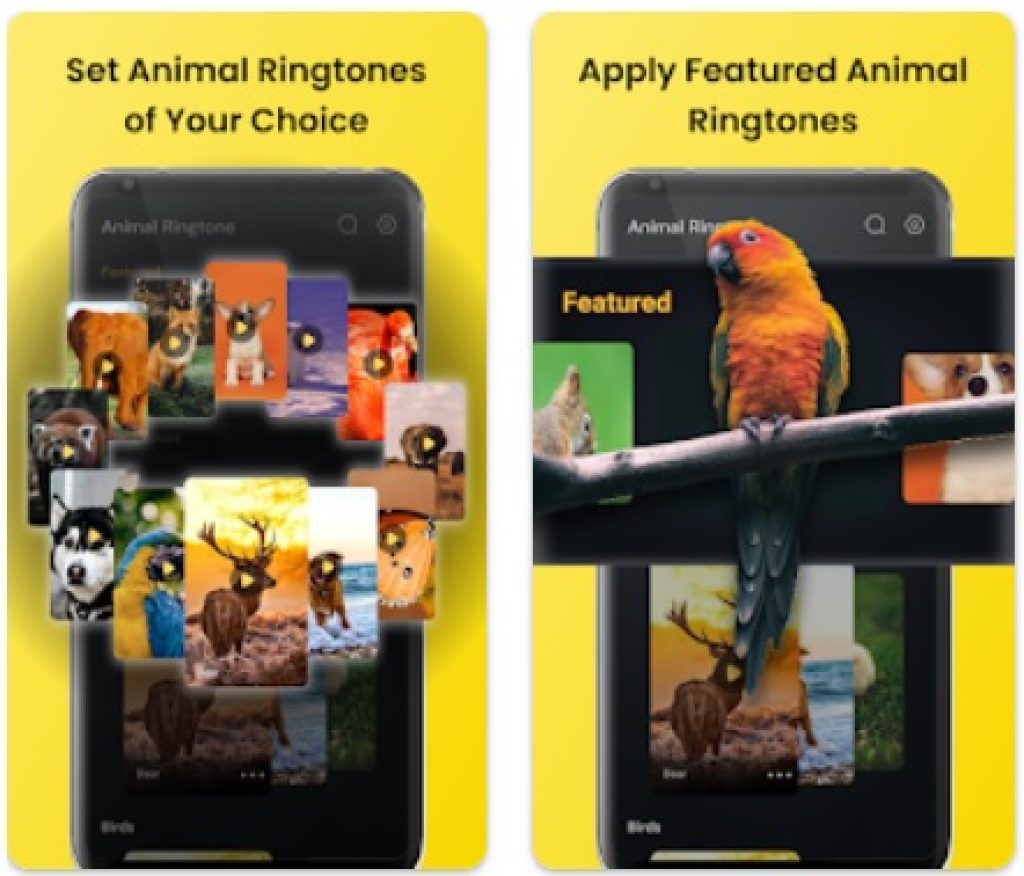 Only thirty-three animals are collected in this app. All animal ringtones have no variations.The app has no search or tabs filtered by animal species. But in addition to the ringtone, notification, alarm, and contact sounds, the animal sound can be set as a timer and as a widget.

When you set the sound as a widget, the app gives a caring point-by-point instruction. Once they are done, an icon appears on the desktop, which, when clicked, starts the desired sound.

When you set the sound on the alarm clock app warns that the melody is not put on the bell, but only added to the list of alarm clock melodies, where you can choose it. 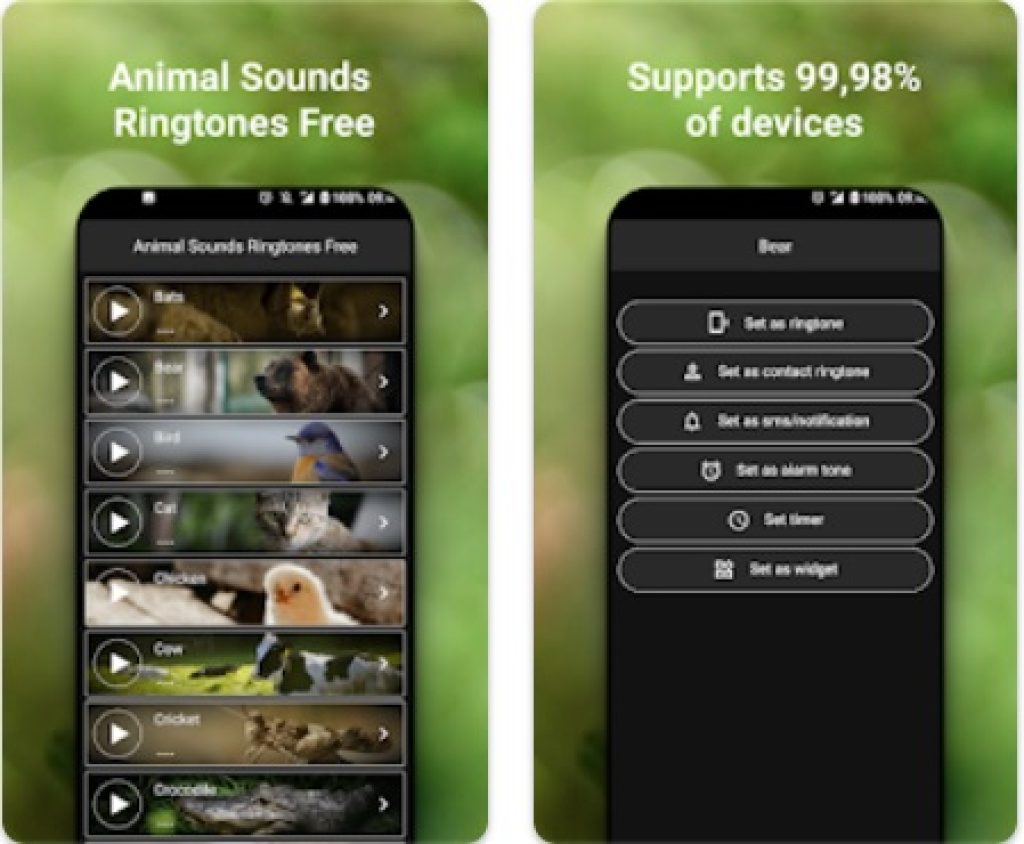 You may also like: 11 Best Notification Apps for Android

The app welcomes us with six categories of animals:

Next, we go to the list of sounds, where each line has a picture of the animal on the right with the name of the animal at the bottom, and a play button on the left.

There are no variations of the sounds, the tunes are not set immediately, but they can be downloaded.

A simple, intuitive interface without extra functions is aimed only at downloading the sounds you like, no more. 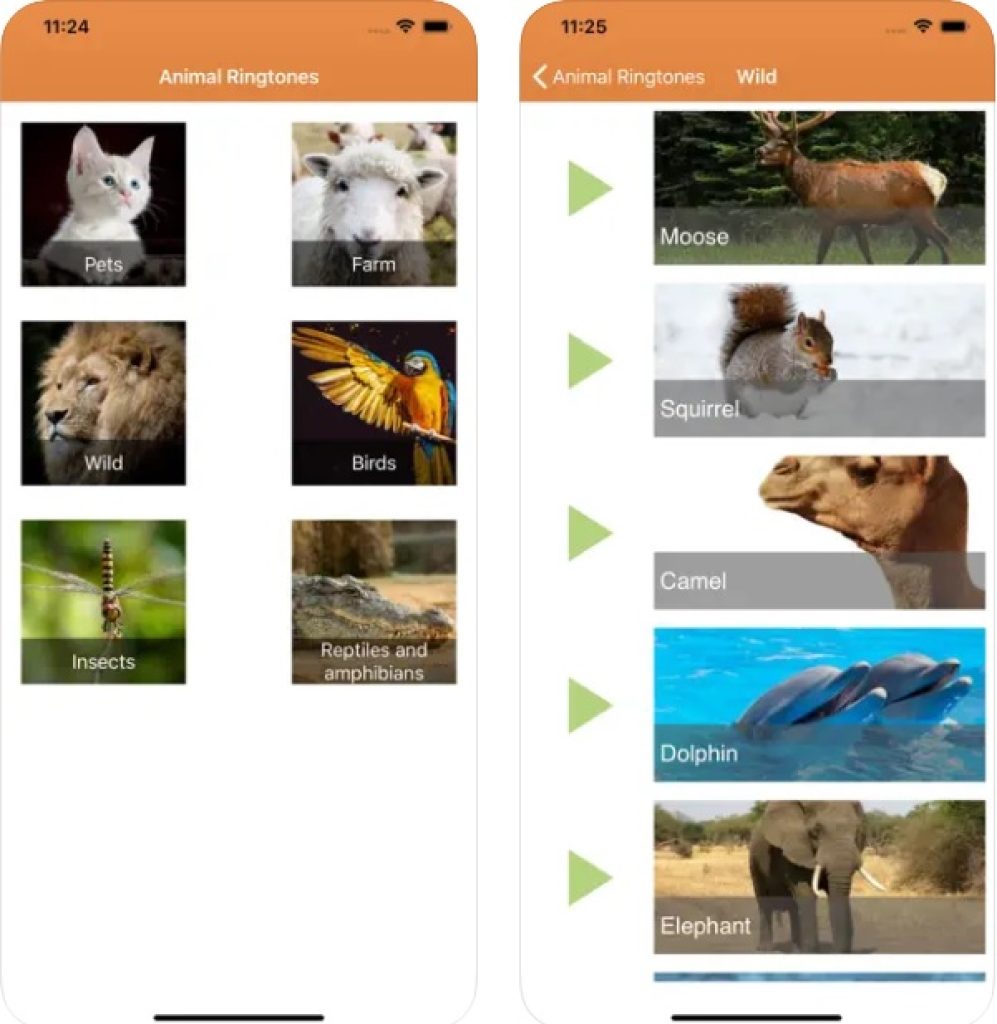 There is also a search that searches directly from the first letter.

The animal sound can be set to an alarm, a notification, a ringtone, or a contact melody.

Also, any animal in the application can be put on the wallpaper. For each animal, there are three variants of wallpaper in high quality. 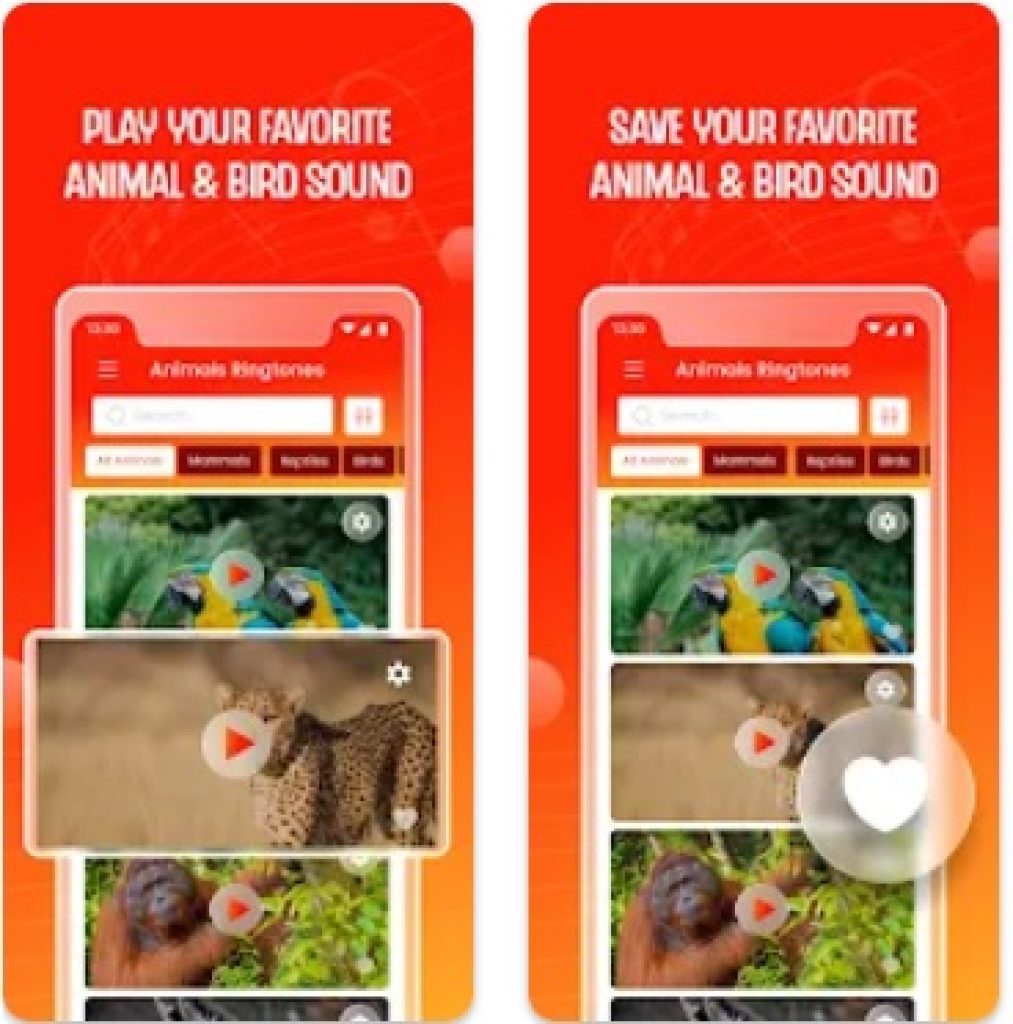 You may also like: 11 Best Funny Ringtone Apps for Android & iOS

The application contains more than one hundred ringtones of the most diverse animals. Easy navigation with design elements will not let you get lost, and the animal is easily identified by the high-quality picture.

The high-quality sound is activated by clicking on the picture, so even a child can understand the application.

Before the first launch, you are greeted with a splash screen with all the different animals in a cartoon style.

The lightweight, minimalistic interface consists of a screen with the most frequently used animal sounds at the bottom and round icons with cartoonish images of the animal categories at the top. There are a total of nine of them:

In addition to the names, animal ringtones are labeled with pictures. You can put these pictures as wallpaper on your desktop.

In the menu, you can see information about the animal of interest. All sounds are set to ringtone, alarm, notification, or contact sound. 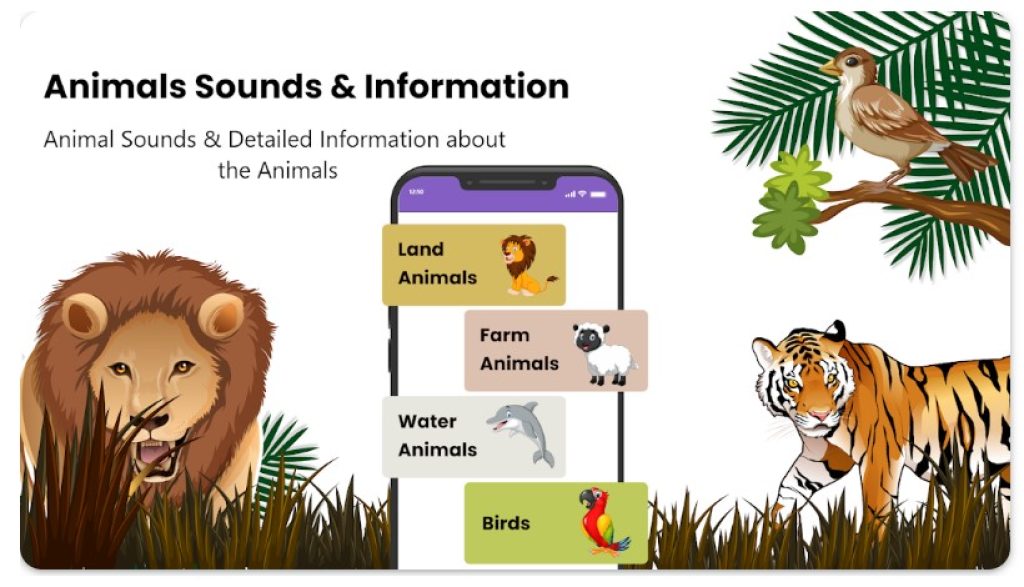