The days when tablets used to be all the rage are gone, yet some Android OEMs remain in the habit of launching new slate models from time to time.

For example, Huawei this week announced the new MediaPad M5 series in the US. Consisting of three models, the new tablet family is available for purchase at Amazon and Newegg.

Customers will be able to pick between 8.4-Inch and 10.8-inch versions both available in Space Gray. Alternatively, Huawei also offers a 10.8-inch Pro model in Champagne Gold.

The tablets have been designed to provide an immersive entertainment experience. With this in mind, the MediaPad M5 series pack a FullView IPS HD display with 2560 x 1600. The screens have been optimized by ClariVu, a company that specializes in boosting screen performance by making colors appear more vivid and contrasts more defined.

Huawei wants to convince you tablets are cool again

What’s more, the 8.4-inch model includes two speakers, while the 10.8-inch versions incorporates a total of four. Huawei has included an AK4378 audio chip and Huawei Histen technology so the tablets are able to deliver high definition sound.

Once again, the Chinese smartphone maker partnered up with audio specialist Harman Kardon to fine tune the speakers on board the MediaPad M5 models.

All three models rely on the computing power of an octa-core Kirin 960, backed up by 4GB of RAM and 64GB of storage. Huawei has also included a microSD card slot for memory expansion up to 256GB.

When it comes to photography, the tablets boast a 13-megapixel rear-facing camera and an 8-megapixel selfie snapper.

Above we told you that Huawei is going to offer a standard 10.8-inch model and a Pro 10.8-inch one. So what sets them apart, you might be wondering?

Huawei’s new tablets will help you get productive tooNeeds improvement

Well, on the standard 10.8-inch version, Huawei has tweaked Android (8.0 Oreo) a little bit to create a familiar Desktop View experience and improve productivity. A taskbar sits at the bottom of the display for easy access to input tools or battery.

Also included is the ability to view multiple windows at once and minimize/maximize them with one click. What’s more, the 10.8-incher features a Pogo-Pin port that allows the tablet to connect to a keyboard.

As for the Pro model, it comes with a smartpen called the Huawei M-Pen. Equipped with world-class 4096-level pressure sensitivity it’s perfect for note-taking on the go or drawing. 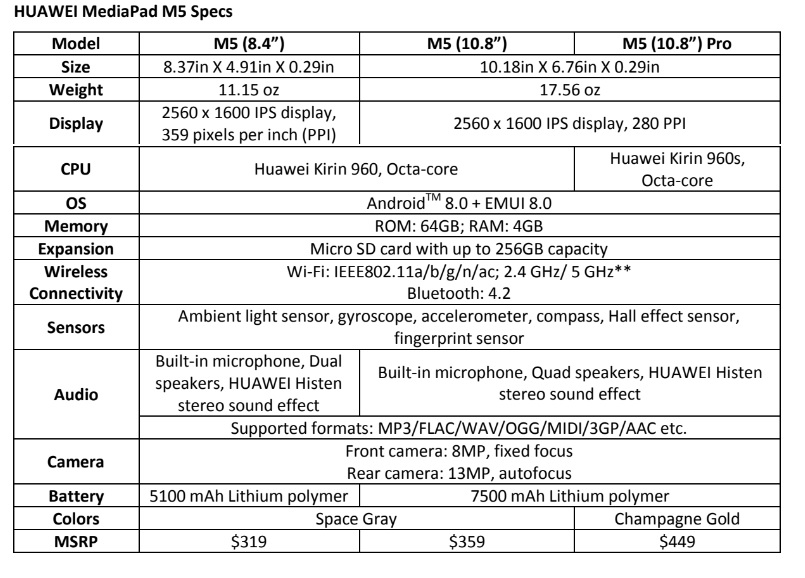