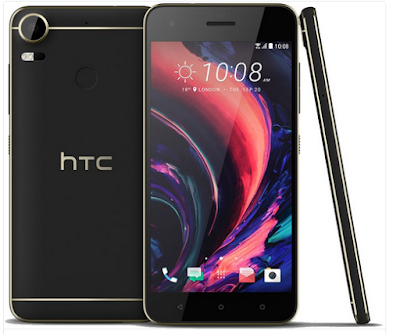 HTC is working on his latest addition to its Desire class under the 2016 flagship model HTC 10. According to reports from company person, pair of Desire smartphones named as Desire 10 Pro and Desire 10 Lifestyle.
Earlier leaks shown that HTC is working on his first Android 7.0 Nougat device under Google's Nexus series.
HTC Desire 10 Lifestyle specs noted as 5.5-inch HD Display, running Android 6.0 Marshmallow, quad-core Qualcomm Snapdragon processor, 13-megapixel rear camera with backside-illuminated (BSI) sensor and single LED flash, 5-megapixel front camera also with a BSI type sensor. Both front and rear cameras are capable of full HD, 1080p video recording.
Desire Lifestyle is expected to come in different colors, featuring a metallic gold trim on the edges and around key hardware elements like the camera lens, flash, and antenna cutouts.
HTC smartphones are very much best in its Audio features, Desire 10 Lifestyle is no exception from that, offering so-called Boomsound Hi-Fi Edition stereo speakers along with 24-bit system audio.
HTC Desire Lifestyle will be coming in 2 variants one with 3GB RAM / 32GB storage or another  2GB RAM/ 16GB storage.
We have no leaked specs regarding the HTC Desire Pro.
Both these Desire smartphones, Desire 10 Lifestyle and Desire 10 Pro are supposedly set to launch near the end of September.
Pricing details of these Desire smartphones were not yet revealed.

Motivational Tips to Help You Stick …
Merry Christmas and Mahatma Gandhi
Why Friday The 13th Will Be Your Luck…
The Ultimate Winter Bucket List Accor…
EXODUS 1 Smartphone: Co-Developed By …