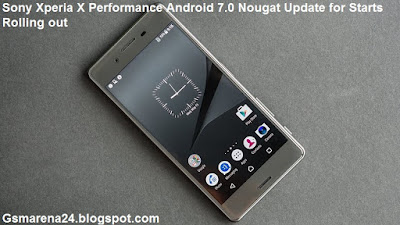 Regardless of being surrounded by the high buzzes for the upcoming smartphones, Sony is also grabbing the headlines due to the beta testing of Android 7.0 Nougat for its Xperia X Performance. Sony is reported to initiate the Beta Testing Program for Android 7.0 Nougat on the Xperia Beta Program, and soon the phone is expected to roll out with the new OS from Google. The first Nougat firmware is build 39.2.A.0.248, and it contains the October 1 security patches.

As per the recently sourced reports, back in August, Sony announced to start a Beta Testing Program for Android Nougat software on Xperia X Performance in select locations but registered users of XP Performance never got any preview for the new firmware, until now. But now Sony is reported to start sending emails to the registered owners of Xperia X Performance for testing Android 7.0 Nougat preview which will be available to them in next 48 hours via OTA (Over-The-Air).

The new updated software is featured with a split-screen multitasking which is in, as is the new notification panel. Apart from this, the camera quality and features are also improved. It offers new options like manual shutter speed control and manual ISO control at 23MP. The auto-rotation bug is now fixed, and the touch sensitivity has reportedly been improved, and . The update comes with the latest iteration of Stamina Mode too. Otherwise, not a lot seems to be changed.

Unfortunately, the beta is limited to the few users who pre-registered for the beta program and Android Nougat FTF file for Sony X Performace is not available for now but we will update it once its available for download. Let us know how’s your experience with Sony Xperia X Performance Android 7.0 Nougat Beta update by comments below.