Apple Now Offers up to $2,500 When You Trade in a Qualifying Mac

In case you didn’t know, Apple has maintained a long-standing trade in program for its most valuable products — affording customers the opportunity to trade in their older Mac (or PC computer) for a new Mac, an Apple Store gift card, or cold hard cash.

While it’s historically known for being on the lower end of the payout spectrum, Apple’s trade in program stole the spotlight this week when the company announced it would begin paying out as much as $2,500 for your old but usable computer hardware.

“Simply tell us about your current Mac or PC to get an estimate,” Apple says on its official webpage announcing the update. “Then mail in your computer for free and choose how you’d like to receive your credit.”

What’s interesting is that the company notes how, upon confirmation, it will issue the trade-in credit in the form of an Apple Store Gift Card, a Visa pre-paid gift card, or a deposit into your PayPal account.

“It’s that easy,” Apple assures us.

The finer print goes on to read that Apple will accept Mac computer models from 2009 or newer, as well as “some [Windows] PCs.” You can also trade in multiple computers at the same time, the company says, allowing you to earn even more credit. Ultimately, however, the amount of credit you receive will depend on the make, model and condition of your hardware. 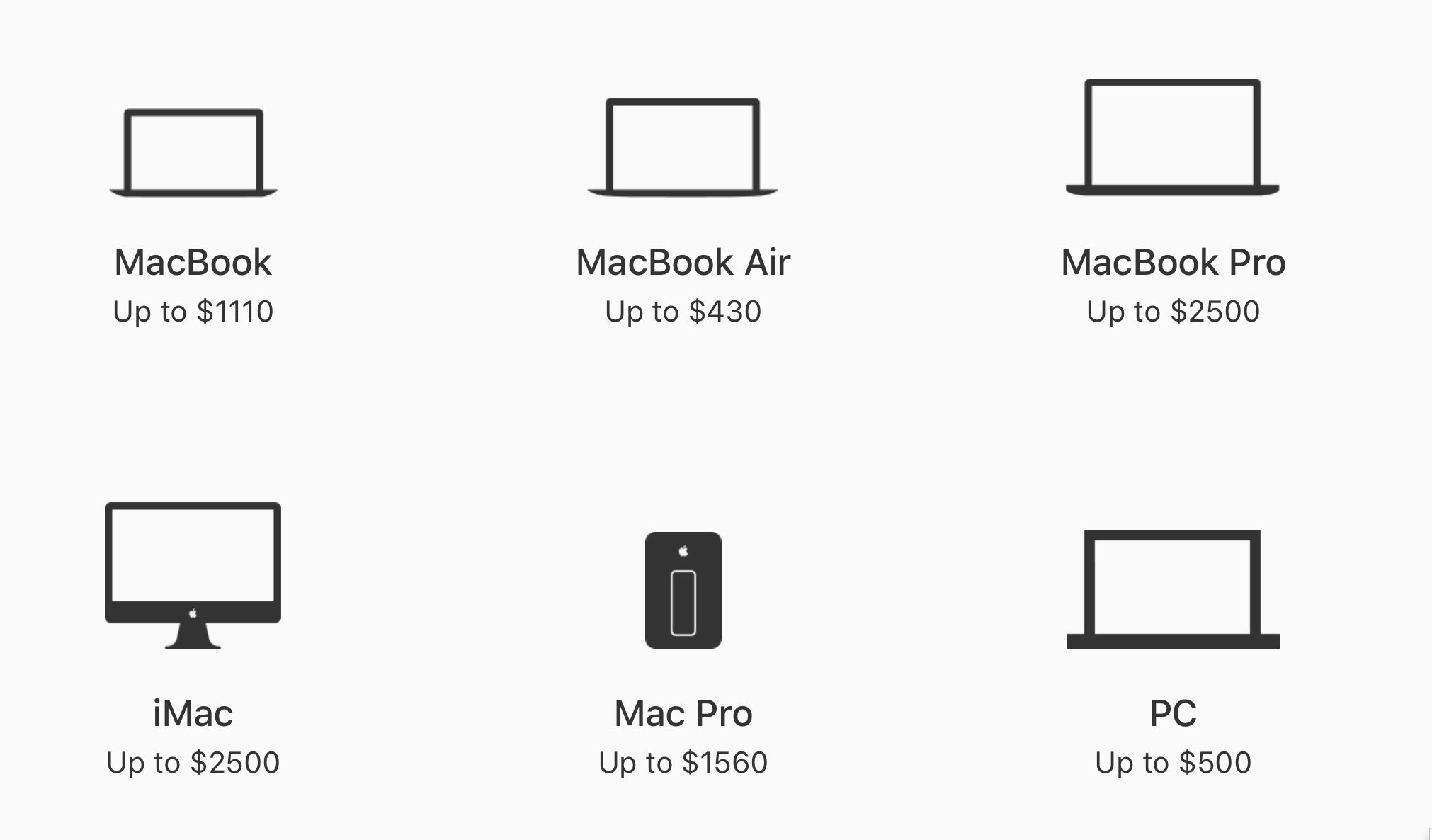 As of this write-up, Apple is quoting the aforementioned payouts on some of its most popular Mac computers, such as the maximum $2,500 credit on eligible MacBook Pro and iMac machines, as well as up to $430 on select MacBook Air models and up to $500 on select PC laptops.

Out of sheer curiosity, I decided to get a quote on my Mid-2017 iMac with 5K Retina display. The process of answering questions  is fairly straightforward, and you can search for your machine by either entering its Serial Number, or brand, model, and configuration.

To my surprise, I was quoted $1,585 for my iMac — which is actually not bad. Assuming I wanted to cash out right here, right now, I don’t think I’d be able to get much more from those crazy scammers on eBay or Craigslist, that’s for sure.

How to Trade in Your Mac or PC

The first thing you’ll want to do when getting a quote is obtain your Mac’s Serial Number — and you can do that fairly quickly by:

Alternatively, you can search for your Mac, or PC, by manually entering the machine’s maker, model, and associated specifications.

You’ll then want to head over to the official website of Apple’s trade-in partner, Phobio, where you’ll be guided through the various on-screen prompts, questions and, ultimately, given a quote and options for how you’d like to receive your money.

If everything looks good, simply agree to the terms and then send your old computer in for verification. Once everything is signed off on Phobio’s end, you’ll receive the initially quoted value via the payment option indicated.

One last thing is that the entire process from initial quote to payout, according to Phobio, could take between two and three weeks; so it’s recommended that you prepare, accordingly.

Apple Now Offers up to $2,500 When You Trade in a Qualifying Mac