My 560SEC has been having a couple of problems with its cooling system.  Coolant has been weeping out of the top tank of the radiator.  In addition, the Monovalve has failed, causing unwanted heating at idle.  The radiator looks either original or replaced very early in the cars life.   As these radiators have plastic tanks, I have purchased a new one to replace it.

It used to be possible to purchase a monovalve repair kit from Mercedes or Bosch.  The supply of these has now dried up.   There is a kit from a company called MTC but all the Mercedes Forums and facebook groups are litted with stories about how this part never works properly.   A friend of mine put me onto a company called Klima Design Works that offer cooling system upgrades for W123 and W126 cars.    They have a monovalve elimination kit for sale.   Their kit is focused more at the W123, but can be adapted to the W126 as well. 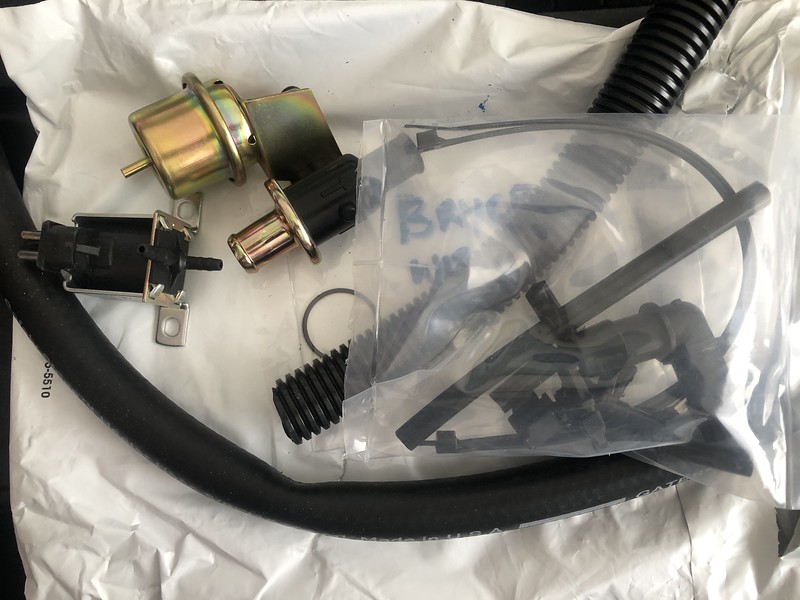 The kit uses a vacuum solenoid to turn off the coolant flow instead of the electromagnetic monovalve.   I especially like that the valve is closed if something goes wrong.  Here in Australia it gets very hot, and A/C is used far more than heat.

The W126 system is a bit more complex than on a W123.   For starters, the heating components are behind the first firewall and the heater core has two outputs that go into the monovalve instead of one.   Klima Design Works suggest leaving the W123 monovalve in place and putting their Heater Valve upstream of the monovalve.    They do suggest removing some of the components to increase flow. 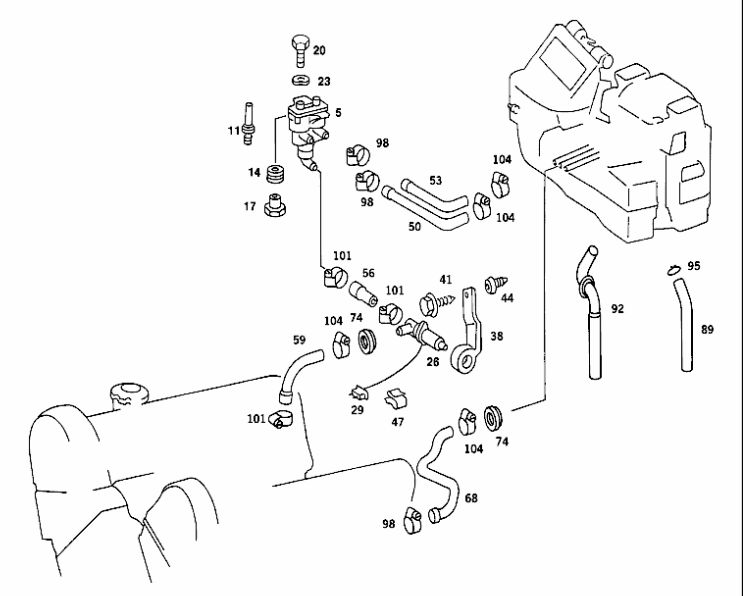 The picture above shows the coolant flow for the heater.  Its not 100% correct as this picture shows the duo valve for the manual climate control, but other than that, its the same.  The coolant enters the heater core via hose 68, and exits through hoses 50 and 53 where it enters the monovalve.   The monovalve controls the flow of coolant.   There is an auxiliary water pump (26) that helps flow coolant at idle to generate more heat. 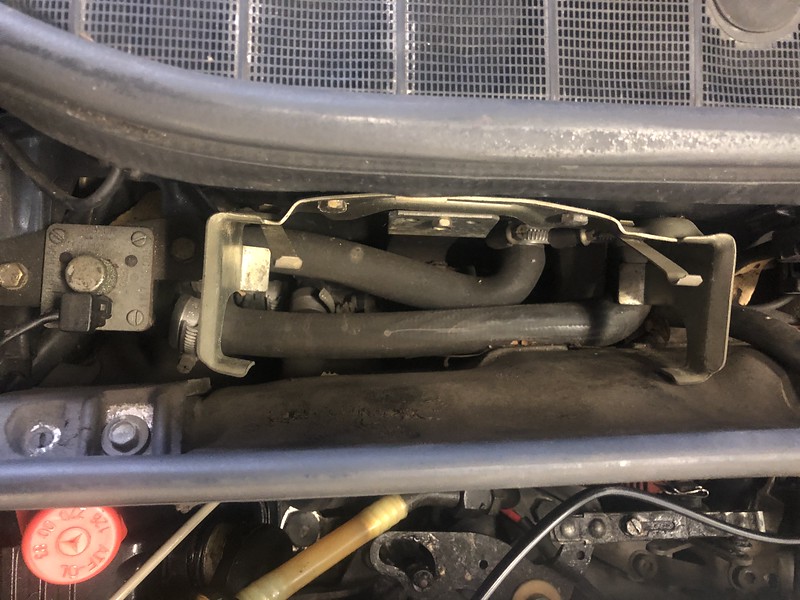 The hoses are exposed when one of the control boxes (that sits in the metal frame) is removed.   The monovalve is on the left, hoses in the centre and the auxiliary water pump underneath.

The simplest way to install the kit would be to cut the hose on the engine side of the auxiliary firewall (hose 68) and install the heater valve there.   That seems like a bit of a hack job to me.   I want to keep the components on the other side of the firewall as the factory did.

The advantage of leaving the monovalve in place is that the car will look more original.   Having said that, removing it can easily be reversed, and I am planning to remove it and the auxiliary water pump.   The auxiliary water pump is only necessary in very cold climates, and it is one more thing to leak and cause problems.   On the Series 1 cars it can cause major problems as it is unfused.   Best case it takes out the climate control unit.  Worst case it causes a small fire.   The Series 2 cars don’t suffer from that problem and disable it if too much current is drawn.

I am thinking of combining hoses 50 and 53 with a T-piece.    I would then mount the heater valve on this combined hose and join it to hose 59.   This would be the simplest solution.   The heater valve would sit where the auxiliary water pump used to be and the solenoid would sit where the monovalve used to be.   Other than cutting hoses (which are consumables) I won’t be permanently modifying the car in any way. 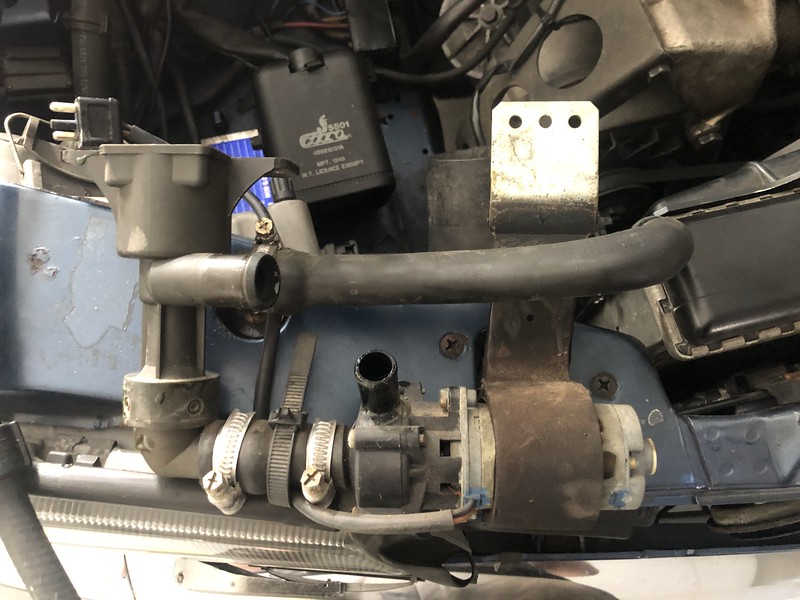 The picture above shows the removed monovalve, auxiliary water pump and various bracketry.  It is a very fiddly job removing all this stuff is there is very little room to work between the two firewalls.   Still, with these components removed there is now plenty of room for the new heater valve and solenoid.    The picture below shows an elbow piece as an example of how the hoses will flow. 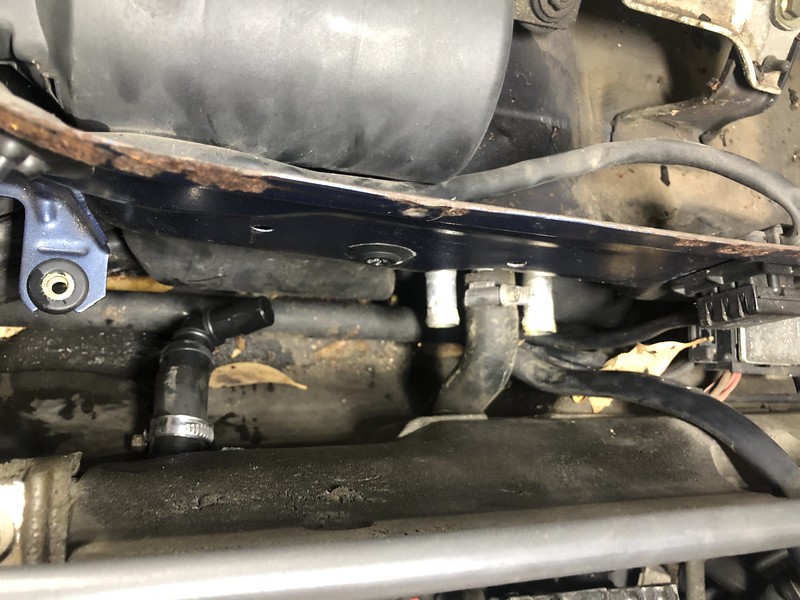 Removing all these hoses is a good opportunity to clean out the leaves that have accumulated underneath the hoses.   I’ve also removed the cowl coverings to give things a good clean in there.   It was necessary to remove the control box bracketry.