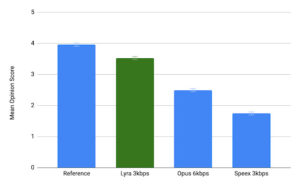 We’re often writing about new video codecs like AV1 or H.266, and recently, we covered AVIF picture format that offers an improved quality/compression ratio against WebP and JPEG, but there’s also work done on audio codecs. Notably, we noted Opus 1.2 offered decent speech quality with a bitrate as low as 12 kbps when it was outed in 2017, the release of Opus 1.3 in 2019 improved the codec further with high-quality speech possible at just 9 kbps. But Google AI recently unveiled Lyra very low-bitrate codec for speech compression that achieves high speech quality with a bitrate as low as 3kbps. Before we go into the details of Lyra codec, Google compared a reference audio file encoded with Lyra at 3 kbps, Opus at 6 kbps (the minimum bitrate for Opus), and Speex at 3 kbps, and users reported Lyra to sound the best, and close to the original. You can actually try it by yourself. Clean Speech Original [...]

Holcim Philippines shares contributio…
Why Should I Trust God Day By Day as …
How To Run a Beauty Salon And Not Los…
Fashion blogging: Lesson learnt+ Pers…
SEO Trends and Vitals for 2021