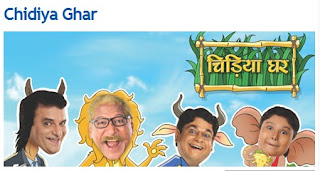 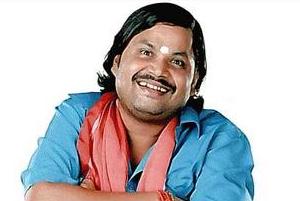 LOL: Laughing Out Loud
ROFL: Rolling On the Floor Laughing

I am fond of SAB TV from the beginning as the programs aired on it are really meant for families and full of fun and entertainment. Two months, a new comedy program- CHIDIYA GHAR was started on this channel and I am complete fan of it. I love the show, concept, actors, performances and the situational comedy. And yes, many times am confused after watching wonderful hilarious scenes that whether I have to LOL or ROFL so gave this title.

Unlike the name suggests, the serial is not about a zoo but a house named after the owner’s wife - Chidiya Narayan. This serial tries to show the animal traits in humans - restlessness like monkeys, appetites like elephants, swiftness of a horse, slowness of a donkey etc. This show showcases the journey from a four legged creature to a two legged one inculcating basics of human values like love, respect for others, patience and the true meaning of a family and togetherness is what makes us humans.


The show has a fresh concept that revolves around a unique idea that we humans too have animal traits and our values and culture separates us from animals.

This is a story of a retired principal, Shri Kesari Narayan and his two sons Gomukh and Ghotak, their respective wives, Mayuri and Koel; younger son Kapi; grandchildren Gillu and Gaj; daughter Maina and Son in law Tota.

The best part of this serial is that it has no story like most serials aired on SAB TV or other channels. The main character (Kesari Narayan) teaches a lesson to his grand children and next few episodes are directed towards that teaching by real examples. It is a very innovative way to move forward the serial.

Kesari Narayan (‘Lion’ of Chidiya Ghar) - Rajendra Gupta has played the main and oldest character of this serial and is man of principles. Like his name, he roars like a lion. He used to teach important lessons of life to his grand children.

Ghotak Narayan (‘Horse’ of Chidiya Ghar) - Paresh Ganatra has played this character of a ticket collector in Indian railways. He is the eldest son of Kesari and very fast like his name. He talks in the railway lingo and loves to living in the train and even converted his room like a train. He is a well known personality in comedy shows and movies and perfectly played this character.

Gomukh Narayan (‘Cow’ of Chidiya Ghar) - Sumit Arora has played the character of teacher and is simpler than a cow. He has a unique way of talking never seen before. He even speaks out the punctuation marks used in sentences like comma; full stop etc. Sumit Arora was last seen playing negative role in Pavitra Rishta and he dynamically performs this comic character very well.

Koel Narayan (‘Cuckoo’ of Chidya Ghar) - Shilpa Shinde has played this role of the wife of Ghotak Narayan. She is a self claimed singer has a habit of talking in the style of singing like her name.

Mayuri Narayan (‘Peahen’ of Chidiya Ghar) - Debina Mukherjee has played the role of wife of Gomukh Narayan. She likes to dance and expresses her happiness by dancing. She loves to hear her praises from her husband and thinks herself as the most beautiful woman.

Gadda Prasad (‘Donkey’ of Chidiya Ghar) - Marathi actor Jitu Shivhare plays the role of dumb servant of the house. He is called as Gadha (donkey) by all the family members. He is the most entertaining and interesting character of this serial and worth watching . I have never seen such a wonderful character and awesome performance in any serial . He has unique way of walking, standing and talking.

Then there are few other characters Gillu Narayan, Gaj Gamini, Kapi Narayan etc. Everyone has their own positives in character and all have performed very well, unexpected from a comedy serial.

1. The performances of each and every character and specially the performance of Jitu Shivhare as Gadha Prasad .
2. The proper family oriented serial that can be enjoyed by your grandparents and grandchildren at the same time.
3. The story based on human values and teachings.
4. The characterization of individual characters as per the animal’s name.

1. Why telecast is limited to only half an hour? It should go on and on.
2. The director should concentrate more on Gadha Prasad and should provide him more screen presence as he is the USP of this serial.

My mother is residing with me who is very conservative in nature and didn’t like typical serials on TV. But she eagerly awaits this serial and never misses any of its episodes. I am wondering that how such a small serial is able to hire these wonderful actors who are worthwhile. The discovery of this serial is Jitu Shivhare and I would like to watch him more often in other serials or movies.

The serial tries to make you laugh by situational comedy and never uses any cheap acts to do so. The most amazing thing is that even the presence of few characters is more than enough to bring smiles to your face.

So just take a break from the typical television and try to enjoy this serial. Watch it once if you really want to laugh out loud.