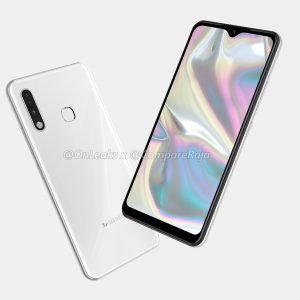 Today the CAD renders of the Galaxy A70e were shared by Steve Hemmerstoffer with CompareRaja & these renders reveal the design of the phone from every angle.

Also, the chin on the bottom is larger than the one on Galaxy A70, again suggesting that the A70e is a cheaper version of the A70.

A surprise comes in the form of a micro-USB port on the bottom instead of a USB Type-C port that we see on even the much lower-priced Galaxy M series phones. The 3.5mm headphone jack is placed on top.

The specifications are not yet known so we will have to wait for more information. Also, Samsung has not yet given any hint of the launch date.