Released about a month after the launch of the Note 4 in July 2017, these successors to the much admired Hot 4 are here to steal users attention away from their predecessor.

The Infinix Hot 4 has been the most searched smartphone on Techlass blog for months now, which means users are obviously still warming up to the device.

Now here's the Hot 5 code named X559 and tagged 'My mobile cinema', as the fifth midrange device in the Hot series and probably a better smartphone than its predecessor, the Hot 4.

Did you say probably?

One cannot only tell from its specs sheet if it is better but can only make assumptions. Its real life operation and the reviews from users will give us a definite conclusion.

Isn't it too sudden to be releasing a new smartphone in the same year as the Hot S2, Note 4 and, Note 4 Pro? was enough time taken to design and build the Hot 5?, or is Infinix trying to be on par with Tecno its biggest competitor?.

This and many more lurk at the back of my mind.

Unlike Tecno that has had to face stigmatization before being widely accepted in Nigeria as a quality smartphone brand, Infinix has actually had it easy gaining acceptance in Nigeria right from inception.

I'll tell you why:

Some Nigerians don't know an Infinix device is also a Chinese made phone as well as Huawei, Xiaomi and several others.

It's funny but before i write you a novel,

Based on the specifications given on Infinix Mobility's website, the Infinix Hot 5 specs and features like its design, software, camera and battery, have been outlined and reviewed below. 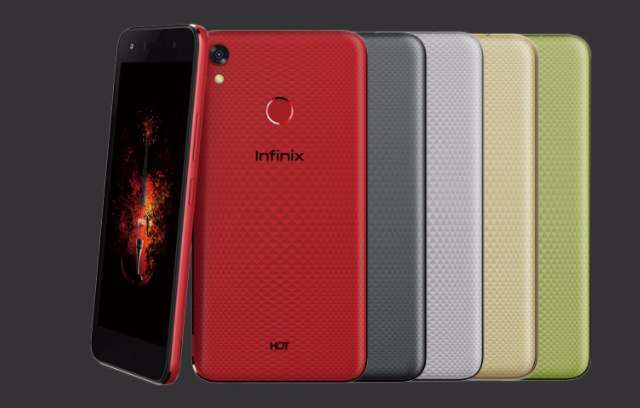 Here's an overview of the Infinix Hot 5 Gsmarena features:

The Hot 5 features a 5.5 inch HD IPS display with a resolution of 1280 x 720 pixels and pixel density of  267PPI. Compared to the Hot 4, this screen size and its resolution are the same.

The screen size is moderate to still give ease of operation with one hand and the HD screen is capable of good colour reproduction.

The Hot 5 has a plastic build which does not come as a surprise since this is the case of all the devices in the Hot series.

A slight loss in weight and thickness may be a good thing because the Hot 4 as it is, is a very light device and now we have a lighter one, but i doubt most users will notice it since its not a significant decrease.

The Hot 5 is available in several colours including Black, White, Gold, Silver, and Red. Not limited to these colours, you get to choose a device in your favorite colour.

Although the Hot 4 Pro is the only variant of the Hot 4 that features a fingerprint scanner, the base model of Infinix's latest device, the Hot 5, has one.

With this scanner as an added security feature on the Hot 5, you can set privacy protection within the device with the use of passwords, patterns or pins and also with your unique fingerprint which is scanned using the scanner located below device's rear camera.

Other than securing your phone from unauthorized access, the scanner can also be used to lock apps within the phone, wake up dormant apps. swipe through photos and take selfies.

According to Infinix Mobility, the Hot 5's fingerprint scanner can unlock the device and apps within 0.1 second.

The Hot 5 is powered by a 1.3GHz Quad-Core MediaTek processor with a MT6580 GPU for graphics rendering.
This smartphone has a RAM size of 2GB and an internal memory storage of 16GB that is expandable upto 32GB via microSD card.
Comparing the Hot 5 to the newly released Note 4, the RAM size and inbuilt storage are the same.
Any major difference between Infinix Hot 4 and Hot 5?
None that i can tell as the RAM size, memory storage, processor made and speed are the same to that of the Hot 4.
You get almost if not the same multitasking level, and can expect smooth and fast operation of the phone without encountering lags and hangs.
At this point you're probably wondering,
What's the unique feature Infinix is offering on the Hot 5 that makes it a better smartphone from the Hot 4?
Well, i'm still going  through the phone's carton.😆
But stay with me!
The Hot 5 also runs on Infinix customized user interface XOS 2.2 based on Android 7.0 Nougat.
Pre-installed with Android Nougat OS instead of the Android Marshmallow OS of the Hot 4, this OS has several features that makes for a more user friendly experience on the smartphone.
These include:

The battery capacity of Infinix Hot 5 is 4000mAh. This battery is removable and is based on Li-on technology.

Same capacity as that of the Hot 4, this battery can support talk time upto 35 hours on 2G network and 24 hours on 3G network. It can also support standby time upto 837 hours.

The Hot 5 is a dual SIM smartphone that supports the use of two micro SIMs.

It has no 4G LTE connectivity that makes for fast download speeds and streaming, but comes with other connectivity options such as USB, Bluetooth, GPS, OTG, WiFi direct and mobile hotspot.

Its sensors include fingerprint, ambient light, e-compass and proximity sensors.

The Infinix Hot 5 is available in Nigeria as with other African countries such as Ghana and Kenya. In either countries, you can buy Infinix Hot 5 from their reputable online stores.


This post first appeared on Techlass, please read the originial post: here
People also like
Experience Ultimate Relaxation Together: Discover the Benefits of a Couples Massage on Your Next Resort Trip!
30 Cheap & High ROI Home Renovations (And 5 Costly DIY Mistakes)
What You Need to Know About Sydney Epoxy Flooring
How to Lose Weight and Keep it off Permanently
9 Real Estate Trends To Watch Out For in 2023, according to Experts
The Best Passive Income Investments
Pet Heating Pad 65x40cm Cat And Dog Waterproof Sleeve Temperature Regulating Anti Scratching Heating Pad