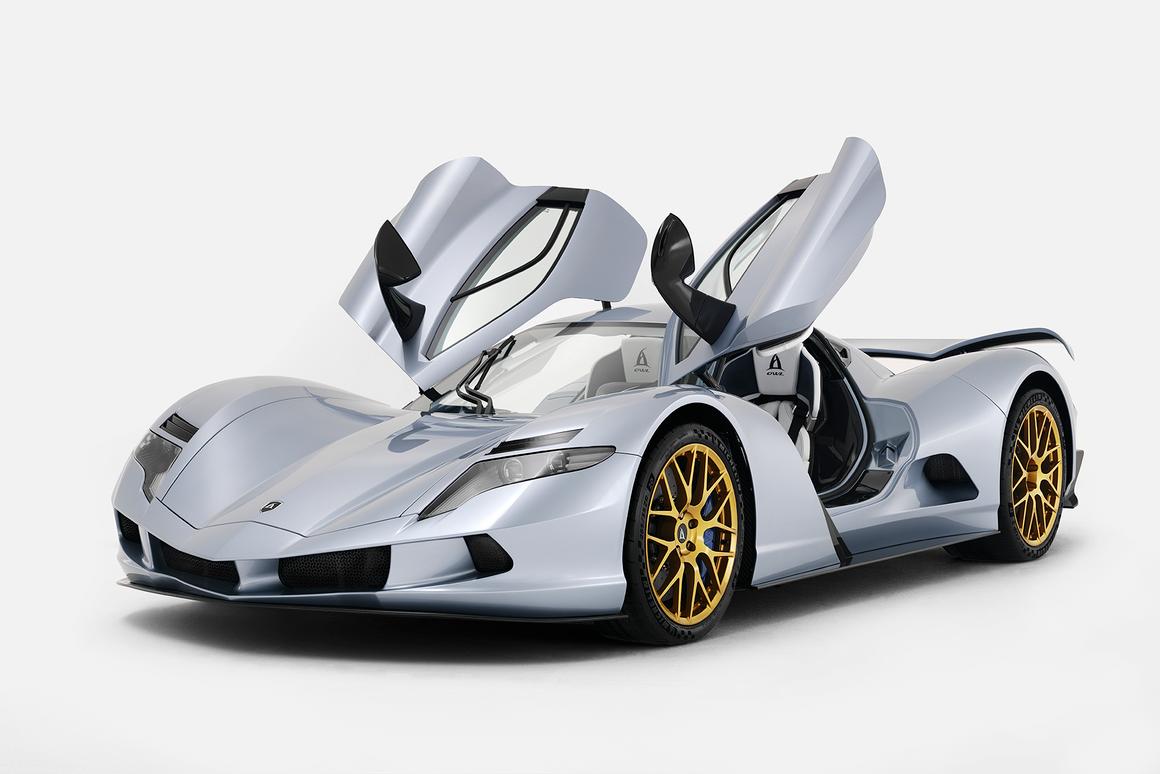 Shortly after debuting at the 2017 Frankfurt Motor Show, the Aspark Owl prototype scorched the path from 0 to 62 mph (100 km/h) in 1.89 seconds, setting itself up to be the quickest production car in the world. All it needed was to, you know, be produced. We move a step closer as the 1,985-hp production Owl debuted on Tuesday, bringing with it a US$3.1 million price tag and throwing in an even more impressive 1.69-second acceleration time, though that's 0-60 (96.5 km/h), not 62 mph. If that sounds worth a few measly mil, get in line quickly – only 50 will be built.
The Owl made its debut at the 2019 Dubai Motor Show, which really feels like the location for such an outrageous machine to roar out of hibernation. Making the production Owl that much more insane than the prototype is a series of four permanent magnet synchronous electric motors that creates the 1,985-horse stampede and provides 1,475 lb-ft (2,000 Nm) of torque to send the car flashing to its world's fastest acceleration. If we're to take Aspark at its word, the production Owl uses road-legal tires, along with a 1-ft (305-mm) rollout, for its 1.69-second time (the prototype used race tires for its 1.89-second run). Aspark doesn't say whether the 0-62 mph changes for the production car, but it does say drivers will enjoy a 10.6-second 0-186 mph (300 km/h) on the road to a 249-mph (400 km/h) top speed.
When it's not powering record-breaking performance laps, the 64-kWh lithium-ion battery integrated amidships within the carbon monocoque chassis structure uses its electrons more frugally toward powering the car for 280 miles (450 km, NEDC) of range, according to Aspark's estimates. The battery charges in roughly 80 minutes via a 44-kW charger.
Expect the Owl to nearly scrape bottom on all but the most even surfaces, as Aspark has set about making it one of the lowest-riding cars in the world with ride height automatically and manually adjustable between 80 and 160 mm (3.1 and 6.3 in) via three double-wishbone hydraulic suspension settings. Drivers can also select between sport-dynamic, rain-snow, city-comfort and high-boost driving modes. A torque vectoring system sharpens handling, and a variety of safety systems such as ABS, ESP, traction control and tire pressure monitoring combine to keep the car performing as designed.
The Owl's carbon fiber bodywork looks much the same as it did in 2017, with the exception of a few big changes, including the active rear wing that disappears seamlessly when speeds drop below 62 mph, the loss of the louvred rear deck, and the new side-view mirrors with cameras. The car still wears the odd dipped hood center outlined by boomerang headlamp-stamped bulges, which for better or worse, is the unique signature by which we'll continue to remember it. At under a meter (3.3 ft) tall, some owners might double it in height.
Inside the "falcon wings," Aspark keeps the focus on digital tech, moving some of the physical switches to the ceiling for a feel reminiscent of an aircraft cockpit. An infotainment screen and digital instruments serve up information, with the dashboard color scheme changing to match drive mode.
Aspark will build its 50 Owls in Italy in cooperation with Manifattura Automobili Torino, which is also behind the awesome resurrected Lancia Stratos. Each will be customized around the individual buyer's wants, which will undoubtedly drive average selling price well north of the €2.9 million (US$3.2 million) base. It plans to deliver the first in the second quarter of 2020.
Source: Aspark﻿