Shane Dawson and Jake Paul: How a YouTube series 'could be making millions'. 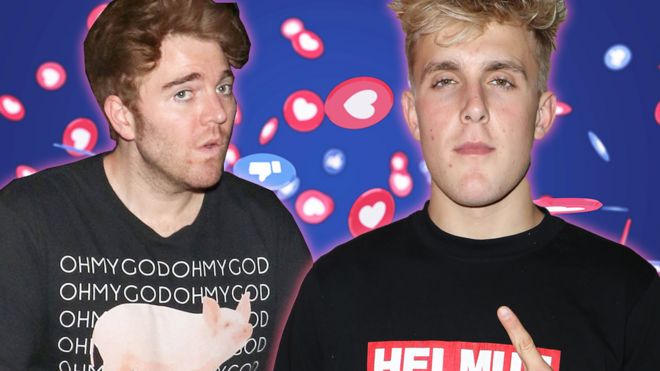 One of the world's most subscribed-to vloggers, Shane Dawson, is halfway through an eight-part series about fellow YouTuber Jake Paul.
The videos are around 40 minutes in length, have stacked up more than 50m views and, probably unsurprising to most, are making a lot of money.
An industry expert told Radio 1 Newsbeat that Shane could be making around $2m (£1.5m) a month.
Jake is the brother of Logan Paul, who earlier this year controversially filmed a man appearing to have taken his life.
The premise of Shane's series is to get to know one of the platform's most notorious stars.
Skip Twitter post by @shanedawson

I know it’s controversial but i really wanna try more things like this on my channel. I wanna try things i’m genuinely fascinated by and interested in. The ups and downs of Jake Paul’s life and persona is something I would LOVE to see from the inside. pic.twitter.com/5Og8qoknNp
— Shane Dawson (@shanedawson) July 12, 2018

Jake has also been involved in his fair share of controversial incidents.
He's been accused of bullying in the past, exploiting other YouTubers and creating content inappropriate for his young audience.
In the opening episode, Shane asks: "Could he be doing this series with me just to get views?"
But the reason Shane has made this series on his channel - which has around 18m subscribers - is because there's big business in getting ad sponsors at the beginning of his vlogs.
Shane "could definitely be paid anything from $85,000 to $170,000 for one video," explains Jessica Brennan, an influencer marketing manager for agency The Specialist Works.
"The fact he's probably making around 15 videos a month means he's earning around $2m a month."
She says this series is particularly attractive to brands because it's gone viral, and has been sitting in the top trending videos on YouTube all week.
"It means that these types of people are merging into a celebrity, more than just a YouTuber now because of how well they are known outside of their platform".
Skip Twitter post by @jakepaul

I love Shane & am trusting him 2 carry out the rest of the series..

I hope he can actually make it clear WHO I AM & WHY I’ve done certain things & SHOW the side of me that no one has ever seen..

That’s why I agreed to do the series.. the “sociopath” STUFF doesn’t interest me
— Jake Paul (@jakepaul) October 1, 2018

Report
End of Twitter post by @jakepaul
During one of the earlier episodes Shane asks, "Is Jake Paul a sociopath?" - a comment which resulted in a lot of criticism for making a reckless claim without substance.
Shane apologised on Snapchat, and now he's tweeted that he's taking a break from social media until the series is complete.

Lesser-known YouTubers are uploading reaction videos to the series, something Jessica would advise channels to do.
"It's a great tactic to jump on the bandwagon, it means you get more views suddenly because people are searching for this subject," Jessica tells Newsbeat.
It essentially creates a chain reaction, allowing other vloggers to capitalise on the original series.
Fraser Macdonald, known as iNabber on the platform, appears in episode one and says it was a "career-changing opportunity".
"I've gained around 70,000 subscribers in a few days," he tells Newsbeat. "It means the money's going to go up."
Jake posted on his own channel that he's had no influence on the production of the series.
Recently, vlogger Joe Sugg told Newsbeat he's hoping his appearance on Strictly Come Dancing will allow social media stars to transition to mainstream media.
But that might not be a priority for Shane. If one of his shows was on traditional TV, or even newer services like Netflix, he would have to split the money with the platform or TV channel.
By creating a series like this, he gets to keep all the profits.
Jessica says that could set a trend, with other vloggers "evolving" their channels to replicate what Shane is doing.
BBC News.﻿

Shane Dawson and Jake Paul: How a YouTube series 'could be making millions'.