In Soul Crash you create a team of 3 hero fighters who will fight along with you.  Then battle other teams to prove yourself worthy.  You will see that the competition gets addicting since there are players around the world wanting to be the best.  Customize your stats earning stat points.  Recruit heroes from chests and upgrade them along with their weapons with rare enchant stones.  As opposed to taking turns in battle (turn based fighting) you go real time; which will test you on your ability to react on different scenarios.  It's surprising that you only need to hit just three buttons - tag, counter, soul attack to maneuver characters' movements but there are hidden controls like "tag combo" and "deflect" all of which have to be hit with precise timing.  Your reflexes will need to be top notch. 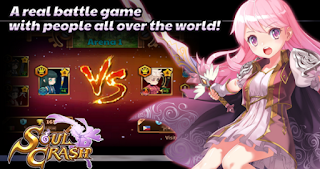 The best part of Soul Crash is that its free to play.  No need to reach into your wallet to have an awesome time with friends.  Also the graphics; the anime Japanese style renderings will mesmerize you; putting you in a state of shock in a good way.  It is very easy to play; but skill is also very important for you to master. You must figure out a game plan to stand a chance against many fighters.  The online feature lets you go head to head on a one round match.  You either win or lose.  Now available for Android platform which you can be download from Google Play Store.  Check out the facebook: Soul Crash

The Face: A guide to Gothic fashion style