Did anyone catch the Leprechaun last week? Sweet Pea gave it another try this year. Last year she set up an elaborate trap involving string, bait, weights and triggers to ensnare the elusive leprechaun. This year she modified her efforts by rigging an alarm to wake her when the leprechaun went for her bait. 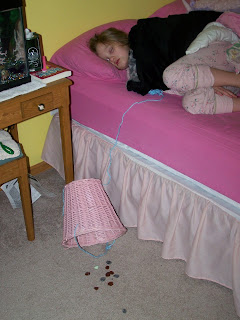 SP's bait was a trail of homemade paper coins leading to an upside down wastebasket suspended with yarn by her bed. 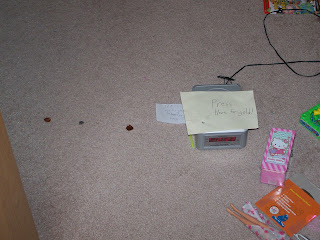 The trail of coins started at the other end of her room next to a note placed on top of her alarm clock. The plan was for Lenny the Leprechaun to read the note (stating press here for gold), press the alarm button, waking SP just in time to spring her trap.

SP's enthusiasm even got her brother in on the action too. He left a trail of paper coins too, not leading to a trap but to a list of leprechaun questions. His letter started out by wishing the leprechaun a lucky day and that he left a cup of Granny Smith Sweet Green Apple applesauce for him. He later wrote that his mom took the applesauce and he would have to find it in the refrigerator. N1S also wrote that he will not be setting any traps. By morning all of N1S's coins were gone and his questions were all answered in green marker. The leprechaun also signed his name in Gaelic which he must have looked up on the Internet. I'm pretty sure Number One Son knew what was going on but he still played along for his little sister.

I guess the leprechaun was too wily to fall for SP's note. In the morning SP's paper money was gone, but the kindly Lenny left her a box of orange flavored Tic-Tac's in trade.

I'm not sure if SP really expects to catch a leprechaun each year or if she just intends to trick her parents into giving her a treat every March. Either way, I'd say we all are pretty lucky to have Lenny to entertain us.