Summer Reading Recommendation: "The Dinosaur in the Elevator," a Write-Your-Own-Ending Book by Howard Eisenberg ~ Plus a Contest for Kids! 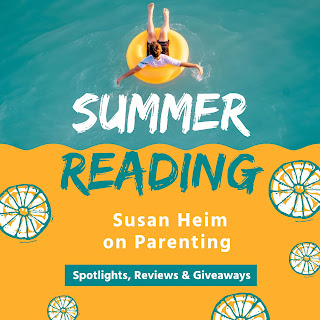 Do you have a young budding writer in your household? If you said yes, you'll definitely want to pick up a copy of The Dinosaur in the Elevator, by Howard Eisenberg. Not only will kids get to read an exciting story, but they can imagine their own ending and even enter a writing contest sponsored by the author! Read on to learn more... 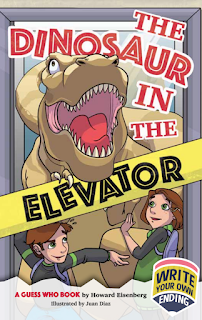 The Dinosaur in the Elevator
by Howard Eisenberg

Getting into an elevator to who-knows-where with a T-Rex they'd only just met was risky, maybe even loony. But they'd never get another chance at such an adventure.

Twins Robbie and Abby get more than they bargained for when they imagine a museum T-Rex back to life. Soon they're on an adventure through the Cretaceous Era with dinosaurs of every shape and size -- and not all of them are friendly. But they are surprisingly helpful. Can you guess their names from the clue-filled poems they sing?

I'M ONE OF THE SMALLEST DINOSAURS
ALL THE BIG GUYS WANT TO SNATCH ME
BUT THAT WILL NOT BE EASY
'CAUSE FIRST THEY'VE GOTTA CATCH ME.
In the Write-Your-Own-Ending books, you get to be your own author. Each book contains blank pages near the end, perfect for you to figure out how you'd get the main characters out of every desperate situation they've gotten into, or just enjoy the ending provided.

CONTEST
Designed for older readers, kids go back to the Cretaceous Era with a museum T-Rex as their guide and protector. Readers can guess the names of a dozen or more dinos as they sing "autobiographical" songs. After they've successfully pushed their imagination buttons, the author invites readers to send their original endings to [email protected] The three best will get signed copies of the next two books in the series and will get to write the ending for upcoming series. 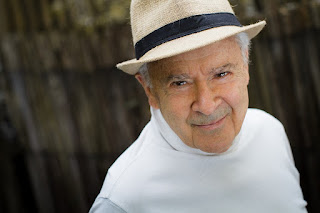 About Howard Eisenberg
Eisenberg began writing at the end of WWII as an eighteen-year-old with his infantry company in a former SS barracks in Germany. Because he had had two years of college and was presumed to be literate, Captain Ingraham pointed to a mimeo machine the Germans had left behind and ordered him to write a newspaper "for morale." Howard completed his first interviews, and "The Co. K Rifleman" was born. His first published magazine article: "I Fell 2,000 Feet and Lived" for Flying Magazine when a stunt parachutist's chute failed to open in upstate New York. Fifty years later, Flying reprinted it in a series of "The Best of Flying." Eisenberg has written hundreds of magazine articles since, jointly bylined after marriage as "By Arlene and Howard Eisenberg" in Saturday Evening Post, Parade, Reader's Digest, Cosmopolitan, McCall's, Sports Illustrated and many other magazines, including book excerpts in the New York Times Magazine and elsewhere. The pair wrote five books together (including a college health textbook until Heidi Murkoff kidnapped her to co-author the original What to Expect When You're Expecting and other remarkably successful books that followed in the series). Howard started solo writing with A Funny Thing Happened on the Way to Cooperstown and It's Never Too Late to Date, and has since written lyrics for a "Guess Who Zoo" CD and a "Fun that Educates" children's book series (Mascot) that includes Guess Who Zoo, Guess Who Farm, and Guess Who Neighborhood. Howard has also written Adorable Scoundrels and a musical titled Million Dollar Bet.

Summer Reading Recommendation: "The Dinosaur in the Elevator," a Write-Your-Own-Ending Book by Howard Eisenberg ~ Plus a Contest for Kids!