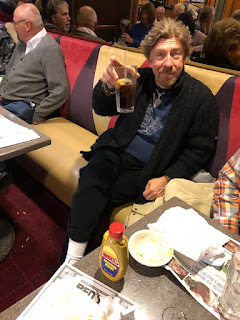 The Oldies Meet and Greet has come a long way since the mid-1990s when a few of us from the WCBS-FM folder on AOL met for lunch.  It evolved into a group protesting the dreadful format change at the station and then into a group of enthusiasts of Saturday Night Oldies on WABC.  Today's gathering of 38 including people who have come for years and some newcomers.  Some of the oldtimers included:

The first-timers included:
Most of the events featured radio personalities or musical performers.  Today's guest was Ken Dashow of Q-104.3 who also appeared in 2015.  After he ate lunch with us he spoke about the Beatles and answered questions about the greatest musical group in history.

Best Story-Rich Games on PC: November…
7 Secrets Tying Runners And Entrepren…
BAHAMAS - Hurricane Dorian
Long Island Sounds July 2019
A Tree with No Roots
I can't wait until next November for the next event.

What is Interactive Voice Response and What are the Benefits of Using It in Your Call Center?