The Last of the Summer Fun

Tags: ice cream ball minute cream tent white owls
June 7th 2006
View original
We are getting dangerously close to the beginning of September and the start of the school year. Once again we packed our lives in the pickup and headed northeast to Bayfield, WI to Tent camp for four days. This is our third year in a row of camping here with our good friends who haven't yet packed up their gear midweek and changed campsites.


We had near perfect weather for the third year in a row also. Hot during the day and cool at night. The animals liked the cool night too because we were visited by many. The first night there was the noisiest night we have ever had to sleep through. The raccoons made not one but three separate passes through our campsite looking for food. In between raccoon raids, two White Owls were hooting back and forth like an Owl Idol competition. Then just as things quieted down for a whole fifteen minutes, and my eyes started to close, a pack of coyotes started to howl and yip. All these noises of nature would have been kind of pretty to listen too if it weren't for the thin piece of nylon tent being the only protection between my head and sharp teeth.

Perhaps the animals were drawn to our tent by our festive string of battery operated blue tent lights. Actually, they are Christmas lights but we didn't tell the raccoons that. 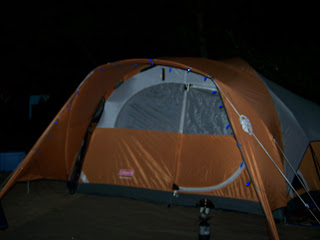 The second night we found out that duct tape doesn't hold lights on nylon very well. So the festive lights only lasted one night. Surprisingly, there were also no more nights of howling coyotes. Hmmm. 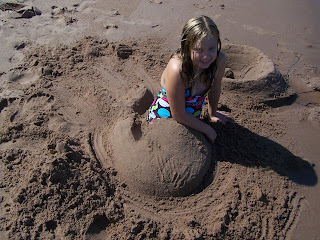 The weather was so nice this mermaid washed up on shore one of the days. 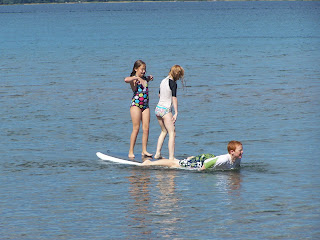 Our friends also rented a paddle board for the day. I don't think the kids did much paddling though. Instead, they used the board for a lot of falling in the water.

Later in the afternoon, we spotted some teenagers climbing all over a fifteen foot long log which had floated into the bay. They were about a hundred yards out. When the teens got tired and abandoned their find, Lady Di and her friend Kerry decided that they wanted that log. So they both jumped into the kayak that we had rented for the day and paddled out to get it. It took them about ten minutes to get to the log and about 50 minutes to tow it to shore. It was big and waterlogged and heavy. When they were within 20 yards of shore, a young swimmer told his dad, "Hey, I want to play on the log!" His dad, who had been watching LD and Kerry the whole time said, "For as much work as those two have gone through for that old log, I don't think they want to give it up so easily."

But it was so worth it. As soon as the log arrived, everyone from our two families immediately wanted to get on it and float. The boys even tried to pull it back out to sea but soon realized that they didn't want to invest 50+ minutes in the endeavor. Who would have thought that a big old log would be the hit of the beach? 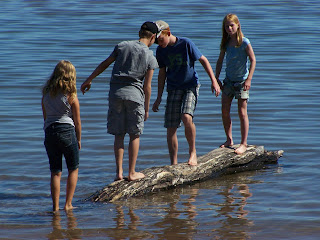 The log is half submerged in this picture. It was also so slippery that a picture with all four kids actually standing on it was rare.

Since we usually camp the last week of August, it usually falls on Number One Son's birthday. 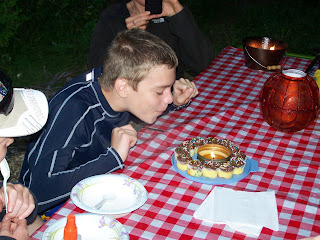 Here he is blowing out his birthday citronella candle surrounded by cupcakes. That orange Ball on the table is our homemade Ice Cream maker. There is a metal cylinder inside the ball which holds the cream and vanilla. Ice and salt go inside the outer area of the ball to cool the cream. Once each section is filled with appropriate ingredients, it's up to the kids to play soccer with the ball to mix it into ice cream. It was a delicious thirteenth birthday party.

So that puts a cap to our summer of 2011. Now we can look forward to school starting in a couple of days. How will we ever get the kids to go to bed without White Owls lullabying them to sleep? 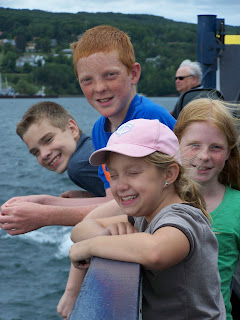 This post first appeared on Stuff In My Brain, please read the originial post: here
People also like
The Friday Roundup – Editing Workflows, Cutting Tips and more!
IT Managed Services Provider Resource Recommendation Update on June 01, 2022
A Guide To Visiting Antigua, Guatemala: The Best 5 Things To Do And See
Momentum True Wireless 3: Sennheiser’s premium quality earbuds released
Beard Bib – Solution For Messy Grooming
What would happen to a modern-day Moses in America?
When does Botox Kick in for Your Patients?

The Last of the Summer Fun