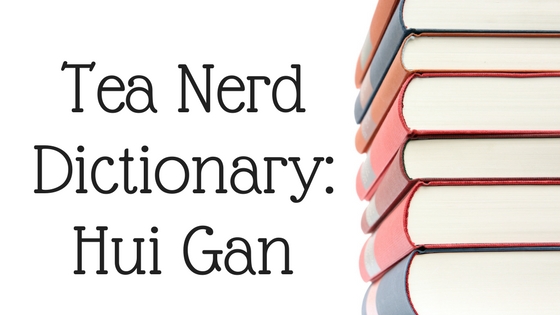 There are a lot of tea terms that are hard to understand at first, in part because they might be ideas or feelings that are foreign to us. This post is the start of a new series that I hope will be a useful resource for all of you. Hui Gan is a term that you'll most often see used in association with puerh. It is sometimes confused with the concept of qi but they do mean different things. Look for another installment on that in the future!

Part of the trouble is that tea is subjective. Two people can taste the same tea that has been prepared in the same way and experience completely different things. Tastes and sensations are an individual experience. They can even change from session to session with the same tea. For that reason, my usual method of understanding something is to gather information from as many places as possible.

According to Babelcarp (a great resource for decoding Chinese tea words), Hui Gan is a "pleasant aftertaste, literally Returning Sweet". It also says that it is also "a non-specific label for virtually any effect after the liquor has been swallowed, literally Returning Feeling".

In her book, Puer Tea: Ancient Caravans and Urban Chic, Jinghong Zhang describes it as "a lingering sweetness after an initial bitterness or astringency, which is said to be much better than that from Iron Goddess of Mercy and other types of tea". In a later passage, hui gan is defined as "a deep and long-lasting sweetness in the throat that follows the strong and bitter flavor".

Angie Lee of 1001 Plateaus gives us this rather poetic description in an essay for Cleaver Quarterly:

"Select foods are known to produce gan 甘, this sweet-tasting, air-chilled sensation that follows an initial sting of bitterness. Gan is peptic, but also poetic – the quicker the conversion from bitter to sweet, the more desirable, but there is no shortcutting the bitterness. Gan is an afterimage. It’s the “every action has an equal and opposite reaction” flip side, sonic boom, sugary echo or funny tingling which proves that after a period of suffering comes joy. And burping. In Chinese, gan is often paired with the word hui 回, which means “returning.” Yes, gan is acid reflux that’s good for you."

Linda Louie of Bana Tea Company writes "The two adjectives commonly used by Chinese to describe the aftertaste are “hui gan” and “hui tian.” Hui gan refers to a cooling sensation that penetrates the entire mouth and in the back of the throat. "Hui tian" refers to the subtle sweet finish of the teas.".

In a recent blog post, Anna at The Tea Squirrel asked Rou Fong of Imperial Tea Court what hui gan is. His response was that "hui gan" refers to “the sweet cleansing finish in the throat”.

Colin of Living Tea wrote in a blog post earlier this summer:

Fine teas have a very important feature that the Chinese call "hui gan." Gan is akin to the minty, cool feeling of peppermint or the air on a cold winter's day. The word "hui" means "remembrance," so this terms refers to the return of the gan on the breath. If you breathe out of your mouth after swallowing a fine tea, you'll find your breath is very comfortable, cool and refreshing.

To get a few more takes on this, I also polled the tea Twittersphere. Reply to my tweet and I'll add your response here!

Hui gan, to me, is an echo of the tea flavor (and/or sometimes aroma) that happens after swallowing.
— Mandala Tea (@Mandala_Tea) September 4, 2017

So now that you have eight other perspectives, what's my take? I personally define hui gan as a sweetness in the back of my throat. This usually occurs after bitterness in raw puerh. Although a menthol-like cooling sensation can be part of that, I tend to think of them as separate effects that sometimes coincide. I do not see hui gan as a "reflection" of the tea. If I taste a tea after time has passed that usually has more to do with my sinuses being stuffy than anything else.

If you'd like to experience hui gan for yourself, I recommend seeking out puerh from the Bulang Mountain village of Lao Man E. Teas from this area can be incredibly bitter but they also offer some of the most strongly pronounced hui gan that I've ever come across. Start out with flash brewing and then work your way up to your own tolerance from there. Rather than focusing on the upfront bitterness, try to pay attention to how your throat feels afterwards. Breathing out of your mouth can help a bit too.

Is there another tea nerd term that you'd like to see added to the dictionary? Let me know about it in the comments!