We recently tested the Bonavita BV1900TS 8-Cup Carafe Coffee Brewer for a few weeks to see what it could do. We compared it to popular competitors—we were also testing two other machines at the same time—and evaluated how easy it was to use, clean, and set up. So is it worth it? Read on to find out.

The Bonavita BV1900TS 8-Cup Carafe Coffee Brewer is compact, making it intricately easy to clean due to fewer parts. It’s the perfect machine for making superbly flavorful drip coffee at home or small-sized office.Though its appearance is hardly eye-catching, it is easy to use and makes more coffee pots than popular machines like the Bunn Velocity Brew BT. 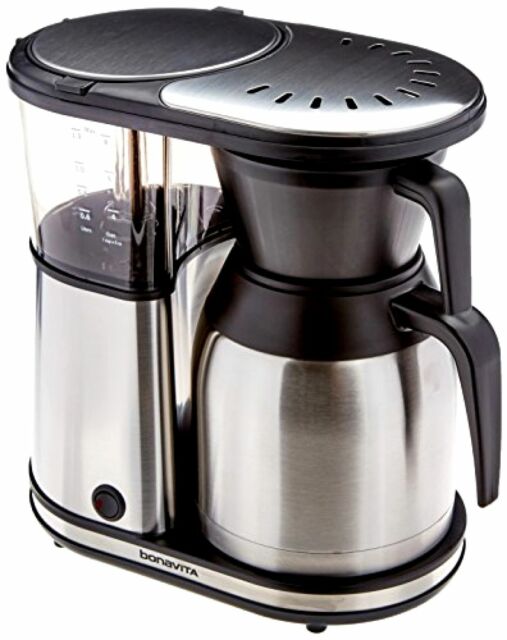 Rather than have a classy modernist design, Bonavita BV1900TS Coffee Brewer strikes a modest look with the only prominent materials being stainless steel, glass and black lid and handles. The coffee maker has no striking LED lights, LCD panels or blinking buttons that add vibrancy to a coffee brewer.

This coffee brewer is perfectly discreet and easy to operate though; it only has one, on and off, button. The coffee then brews to perfection without any further input being required from you. The general outlook is aesthetically attractive, matching up with most modern kitchen appliances with its black plastic accents and stainless steel back.

After filling the reservoir with water, one is required to place coffee grounds in the U-shaped filter basket. The shape allows the coffee grounds to saturate, spouting a full and robust flavor. The Bonavita Bv1900TS 8-Cup Carafe Coffee Brewer features pre-infusion, a mode which makes it possible for the coffee grounds to bloom, reaching full flavor potential; to pre-infuse, simply hold down the on/off button for five seconds.

In only six minutes, this coffee brewer makes a hot pot of coffee, rich in flavor. 45 ounce, equating to eight cups, are brewed to perfection. The temperatures are ideally high at 200 degree Fahrenheit. The thermal carafe will keep your coffee hot for four hours.

The coffee pot itself is entirely made of stainless steel and black plastic accent. This makes it pretty rugged and able to do with short falls off a counter top. The water tank, however, is delicate and can easily break when dropped. It still remains as one of the most compact coffee brewers.

Its shiny stainless steel and black accents make it an attractive kitchen appliance which will look spectacular among your other appliances, most of which have prominent stainless steel bodies. The water tank is marked, enabling the user pour in the exact amount of water needed. Its lid covers both the water tank and shower head, completing a picturesque, neat package.

With no programming, you are left with few options to work with other than press the on/off button. When pre-infusing, you have to stick around as you press down the only button for five seconds, up until it starts blinking. The regular brew cycle is entirely self-driven though.

As a budget coffee machine, Bonavita Bv1900TS Carafe Coffee Brewer is an essential kitchen appliance which takes away all the hassle and simply concentrates on brewing the perfect pot of hot coffee for you.