Power Stone: the Dreamcast brawler that foresaw Fortnite and Overwatch

From the very beginning, developers saw the Dreamcast console as a place to experiment. Sega set the tone with innovative outliers such as Shenmue, Jet Set Radio and Seaman, but other game publishers soon caught the wave. There was Acclaim with the odd extreme sports title Trickstyle, developed by the Burnout team; there was Interplay with futuristic shooter MDK2, created by Bioware five years before Mass Effect; and there was Capcom with its joyful, rule-breaking brawler Power Stone.

Set in a boisterous, steampunk-infused universe of pirate ships, taverns and temples, Power Stone was a two-player 3D beat-em-up, in which environmental awareness was as important as punching. There were 10 characters to choose from, most drawn from weird Victorian and Edwardian adventure fiction tropes: pilot explorer Edward Falcon; dancer (and ninja) Ayame; tank-like miner Gunrock; Galuda, a Native American bounty hunter. These were super colourful, diverse, problematic, overblown misfits, loaded with backstory – and this was years before Overwatch discovered the value of offering players a roster of funny, interesting weirdos rather than musclebound martial arts assassins. 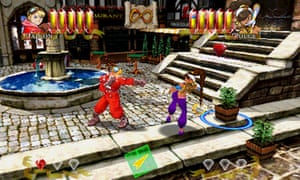 Environmental awareness was as important as punching … a screenshot of Power Stone. Photograph: Capcom

“I was going to go with a modern-day setting to appeal to as many players as possible,” says designer Hideaki Itsuno. “But modern-day technology lacks a certain flair – there’s just no romance to it! So I went with the 19th century, before such technology became ubiquitous.” Itsuno was influenced by Jackie Chan and Indiana Jones movies that he’d watched when he was a child. “It seemed to me to be the kind of positive setting anyone could feel excited about.”

Unlike most Fighting games of the era, the world was viewed from an isometric perspective, with a hyperactive camera that scrolled around, panning in and out of the action. “The game started as a Street Fighter-style side-view fighting game where you would push the stick twice in a direction to move into or out of the screen,” explains producer Takeshi Tezuka. “It was only halfway through development that it changed to an overhead view. I remember how great it felt once we’d got the game to a place where it seemed completely different from Street Fighter.” 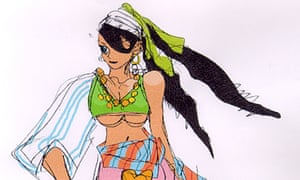 An early design for the fortuneteller, Rouge. Photograph: Capcom

Itsuno was a veteran fighting game developer who had worked on classics such as Street Fighter Alpha, Star Gladiator and Rival Schools. This time he wanted to use his knowledge to create a different sort of combat. “Working on 3D fighting games taught me how to retain the satisfying gameplay of a 2D fighter while providing the freedom of moving in a 3D space,” he says. “But one of my aims with Power Stone was to bring my experience to something that would be well received by players other than just hardcore fighting fans. Fighting games had become incredibly niche, and ordinary gamers were no longer able to keep up.”

His idea was to abandon using button combinations to access special attacks. In Power Stone, players would need to know just three moves: punch, kick and jump. Access to powerful abilities would come via objects littered around the elaborate environments – players could throw chairs, tables and rocks, but also pick up weapons such as flame throwers and miniguns that would break after a few seconds of use.

This move away from specialist knowledge and abilities and toward making powerful weapons randomly available to all players was an important element of the emerging ‘arena battle’ genre – a forebear of the Battle Royale dynamic. In Power Stone and its close contemporary Super Smash Bros, players enter a match with the same items and abilities and have to search the map for the best stuff; allplayers, no matter how skilful, are at the mercy of the capricious world they’re in. In Power Stone, even a novice can become the most powerful player on the grid if they happen to be standing where a minigun spawns.

Itsuno doubled down on this concept through the titular power stone system. Gems appear throughout each bout, and the first player to collect three of them unlocks their character’s special abilities for a limited time, transforming them into super-stylised versions of themselves.

It sounds shallow, but it wasn’t. Power Stone was all about dominating the active space and playing the objective (ie chasing after the items and power stones), while learning how to avoid attacks by using environmental barriers. “There aren’t many weapons, and they break, so even if they caused a high amount of damage, they wouldn’t break the game balance,” says Itsuno. “We made the weapons powerful to encourage players to use them a lot. We didn’t want to just add something in on top of the fighting gameplay so much as make items part of the fighting strategy itself.” 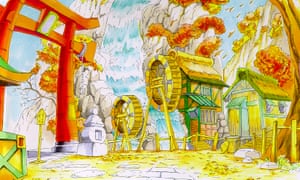 A sketch of the Japan stage. Photograph: Capcom

To get the design just right, Itsuno and Tezuka assembled a team of 30 experienced staff from different areas of the Capcom workforce. “It all started with the idea of developing a game using a team that mixed arcade developers and console developers,” says Itsuno. “We wanted a project that could bring the strengths of both sides – the arcade guys were great at making fighting games and the console guys were expert at creating 3D games. We were trying to be unlike any existing fighting game.”

According to Tezuka the development process was fun but challenging. The game was intended for the Matsushita M2, a powerful successor to the 3DO console, which was ultimately axed. Sensing the impending doom, Capcom switched the project to the Dreamcast and Sega’s Naomi arcade board, which were both based on the same technical specifications. “This was Capcom’s first time developing for those platforms, so it was definitely a trial by fire,” says Tezuka. “But creating a new kind of fighting game on brand-new hardware made every day exciting.” 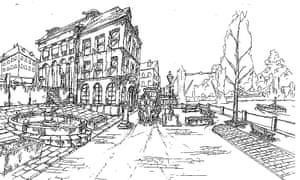 Itsuno can reel off features he never got the chance to add, due to the tight development schedule. “There was a Bomberman-esque mode where the only items on the stage were bombs, and you’d slide them around to hit each other,” he recalls. (Later, this made it into the PSP Power Stone Collection.) “There was also a puzzle mode where you had to use boxes and other items to reach the power stone placed craftily on the stage. And a mode where you could play in first-person perspective! If only we’d had another fortnight, maybe we could have packed it all in …”

Released into arcades in February 1999 and a few weeks later on Dreamcast, the game was a huge success, thrilling players with its impressive 3D visuals and accessible nature. A sequel followed a year later, and the two games made it onto a PSP collection disc in 2006. There was even an entertaining anime series.

“We weren’t just aping current trends or reiterating what had come before, and that has contributed to its lasting appeal,” says Tezuka. “I still get messages from fans about the game. People tweet requests to me to make another Power Stone, which I’d love to do if I got the chance. It would be a particularly great fit for the Nintendo Switch.”

This post first appeared on What Is Stevia? | Health Benefits Of Stevia | Stev, please read the originial post: here
People also like
What to wear: outfit ideas for Christmas & summer
Cheap places to eat in Lagos|| White House Buka
Black Stone Cherry Presents New Music Video For “Give Me One Reason”
Awakening DIY Citrus Shower Bombs
New Everton Boss Rafael Benitez Ready to Fight for Merseyside Club
Florence in One Day: How to Plan the Perfect Itinerary
How do I learn massage?
Reviews 67 Hell Bent by Devon Monk A Broken Magic Novel
A Run Down of Ashton Kutcher Brazilian Jiu Jitsu Journey

Power Stone: the Dreamcast brawler that foresaw Fortnite and Overwatch

Subscribe to What Is Stevia? | Health Benefits Of Stevia | Stev