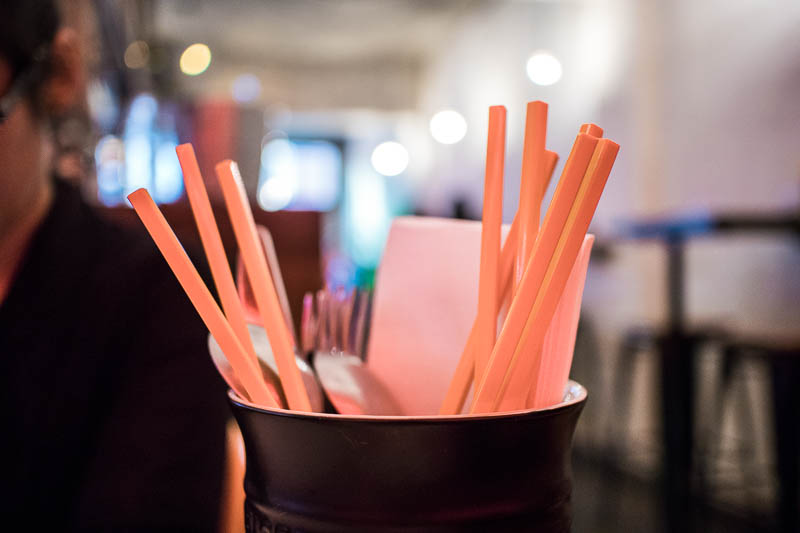 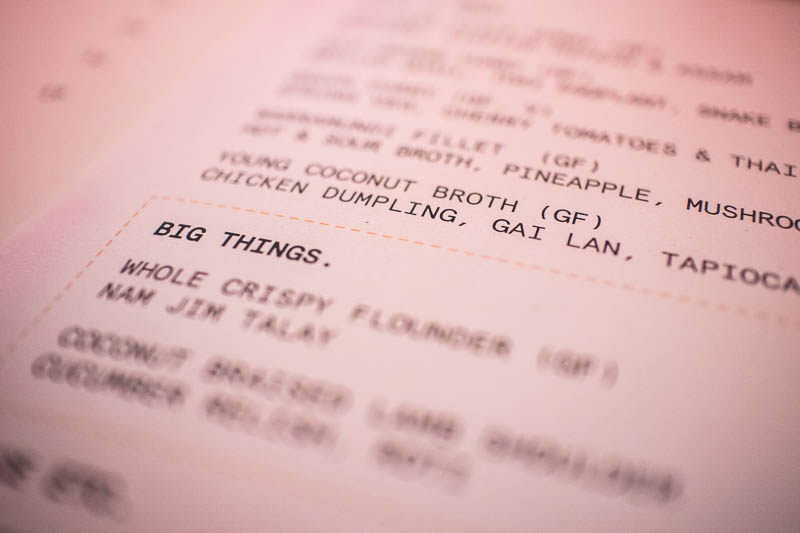 MELBOURNE | BKK is the reincarnation of the space formerly known as Saigon Sally. BKK takes its inspiration from Thailand (the name comes from the IATA airport code for Bangkok’s Suvarnabhumi Airport) and is a more refined take on things than it predecessor. We were recently invited in to try some of the things on the menu, and as big fans of the Commune Group’s other venues (Hanoi Hannah, Tokyo Tina, Neptune) we were keen to see if BKK lived up to expectations.

The space was transformed in just six weeks, and the bones will be recognisable to anyone who dined at Saigon Sally. The large central bar is still there, but now the feature wall contains red back lit glass bricks. On that, you might notice that our photos look a bit odd colour wise – this is because we were seated directly in front of the aforementioned red back lit wall. While it certainly fits in with the design of the restaurant, it’s terrible for food photography – there’s only so much that one can fix in post processing. In real life the food looks a lot punchier and more colourful.

The kitchen is headed up by Sean Judd (ex Nahm (Bangkok), Longrain and Chin Chin) and unsurprisingly the inclusive nature and diverse offering of Thai cuisine is on show at BKK. Everything is made in house from scratch – down to the sauces and pastes, and everything’s designed for sharing.

The surprisingly extensive drinks list contains enough to keep everyone happy. Two pages one bottled wines from around the world are featured, and around 20 are available by the glass. Cocktails are inspired by Suvarnabhumi Airport and feature things like the “Boarding Pass” with Belverdere vodka, Esprit de Figues, watermelon juice, and yuzu, and our favourite the “Layover” with Bacardi Fuego rum, cherry heering, lime, and falernum. There’s also a range of craft beers and commercial lagers, along with mocktails and teas.

Food wise, there’s a lot that looks appealing on the menu. One of our favourites are the fried Chicken ribs served with crispy aromats and a sweet fish sauce. The chicken is tender, with a nice crispy coating, while the fish sauce packs a sweet, salty and sour punch. Another highlight are the rolled rice noodles with Gai Lan, egg, and sweet soy. The flavours are beautifully balanced and there’s a nice charred wok hei present with each bite. The Young Coconut Broth with chicken dumplings, gai lan, and tapioca pearls is also very tasty with a rich, flavoursome, complex and slightly spicy broth. It could have done with and extra dumpling or two given the price though.

The one let down of our meal was the banana leaf curry – it’s served as a sort of semi-dry pancake with mussels, scallops, fish, basil and coconut cream. The sort of thing that’s usually right up our alley but in this case was rather bland, lacking much of the complexity and punchy flavours of the other dishes we tried. It wasn’t bad, but we felt that it could have been so much more. Dessert got things back on the right track – the crispy crepe rolled up like a waffle cone and filled with fresh mango and sticky rice ice-cream is a light and flavoursome was to end things.

Overall we enjoyed our meal at BKK but I’m not sure we could say that our expectations were met. Given the quality of Commune Group’s other establishments, and the fantastic Saigon Sally that stood here only a few month prior, and the pedigree of Sean Judd, we were expecting more. There wasn’t anything bad on the menu, and the chicken and rolled noodles were fantastic, but the overall wow factor was often lacking. It did feel at times that flavours were being toned down for a wider audience. Also of note is the price. Although we didn’t pay on this occasion we couldn’t help but notice that the prices at BKK are on the higher end of the scale compared to similar restaurants around town.

BKK has only been open for two months, and we’re interested to see how things progress after it’s been open a bit longer – there’s certainly a lot of potential for greatness here. Also for those who can’t get past the fact that Saigon Sally has gone, never fear – it’ll be back in a new location once the team at Commune Group find the right space.