This One Weird Mushroom Trick Might Make Your Barley Better

Fungus in whisky – that’ll be the yeast, right? Well, yes – our relationship with those tiny little mushroom boys is the whole reason we can drink any alcoholic drinks at all. But what would happen to our whisky if we were willing to work with other mushrooms as well?

How To Become God's Battle Axe
It’s Me – Chapter 9
Types of Kisses to Spice Up Your Sex …
WordPress Website Customization: Best…
Spider-Man: If This Be My Destiny - L…

As January rolls endlessly on, and the third national Lockdown sits heavily on us all, I hunt for the small comforts that help the whole thing pass by less noticeably. Luckily, Christmas was not too long ago, and that means that I have a whole stack of books to read through – and if you are imagining me sitting in the depths of a large chair, swilling a dram of something decent around as I languidly flip the pages of a hardback tome, then I thank you. You know your writer well!

The book that has grabbed my attention in the last couple of weeks is Entangled Life by Merlin Sheldrake – a 2020 nonfiction title about ‘How fungi make our worlds, change our minds and shape our futures’. As is true of any book I have on the go, I become temporarily obsessed with it, and it’s both my luck (and yours) that at this time of blog-writing, I found something fascinating among the pages that I think fits very nicely into my need to write informatively about whisky.

I’d quickly like to drop a recommendation for the book first of all. Even if you know a bit about the influence fungi have on the natural and human worlds, this book describes it all in such wonderful detail, you’ll be seeing the world as mushrooms for weeks afterwards. It might even be permanently brain-altering which, considering the subject matter is fungi, is very apt indeed.

That’s a long science word! For ages now, I’ve consulted with https://whiskyscience.blogspot.com/ as my favourite scientific lens to look at whisky. Now it’s my turn, and I’m getting speculative. 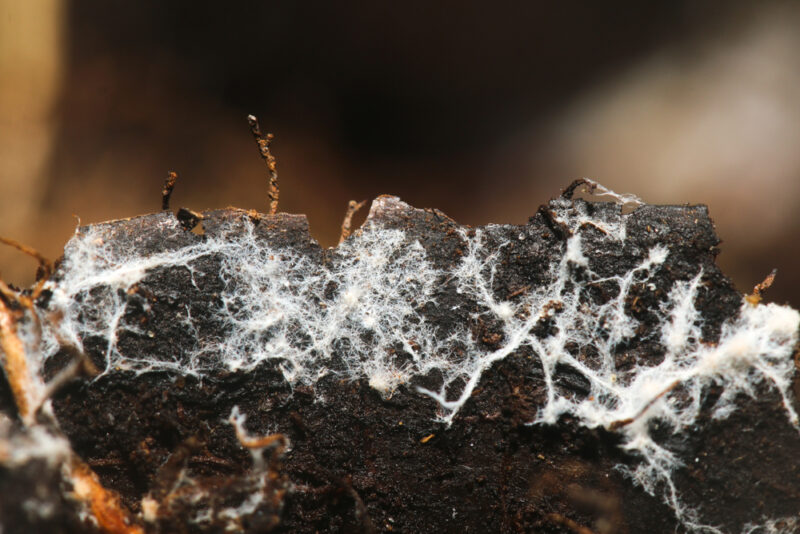 It may not look pretty to us, but many plants depend on these networks of fungal mycelia for vital nourishment. Don’t worry – all the other fungus pictures will be of nice, socially acceptable mushrooms.

Anything mycorrhizal describes the relationship between a plant’s roots and the fungi that live in the soil alongside them. When we think of plants, we tend to imagine them as capable wee things, able to make their own food from sunshine, and not rely on anybody’s charity, nor gain anything from the dew of another plant’s brow. In reality, though, plants wouldn’t get very far if they didn’t form strong root-level partnerships with all kinds of fungi – great networks of mycelia that break down the complex stuff in the soil and feed it to their partnered plants, in exchange for some of that sweet, sweet captured sunlight from above.

It’s easy for us to put the plant in the more dominant position of provider, since we find plants much more familiar. Surface dwellers like us, plants are part of our sunlit world – the only aboveground indication of a healthy fungal network is the sudden and sometimes risqué protuberance of mushrooms after a shower of rain.

It does fungi a disservice to forget about them, though. The picture belowground is of great mutualism – neither plants nor fungi would be able to access all the nutrients they needed without working properly together: there is a theory that ancient plants would never have made it onto dry land if fungi hadn’t been there to help.

In Pursuit of a Better Strawberry 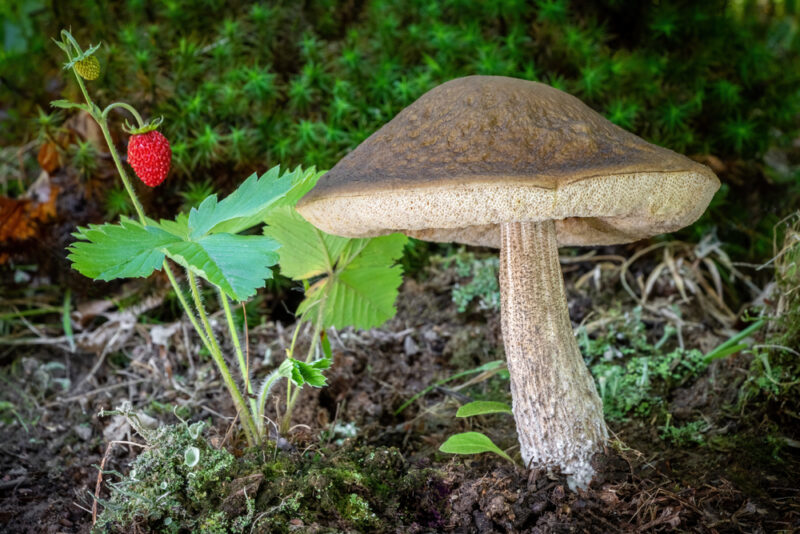 Strawberries and mushrooms – the best of friends?

A PhD scholar took this idea further than most. He grew strawberries alongside different fungal species, and then recorded any differences between the strawberry plants, and most crucially the strawberries*. He also used the cutting edge scientific analysis tool that we also favour in the whisky industry: a Human Tasting Panel.

It shouldn’t come as a surprise that the strawberries showed considerable variation, depending on which fungus they were partnered with. Some produced more fruit, some produced differently shaped fruit, and some seemed to be more attractive to pollinating bumblebees. The human tasting panel also concluded that some strawberry/fungal partnerships produced more delicious fruit than others. There was no complex breeding program for the plants, no genetic modifications – just simple substitution of one species of fungus for another.

Well then, shall we indulge in some light speculation? What if these fungal partnerships are just as important to Barley plants as they are to strawberries?

We know that agribusiness (and some whisky companies!) are quite involved in plant husbandry, breeding and tweaking barley species in order to improve their growing time, their grain yield, or the balance of starch, sugar and protein in their swelling seedheads. 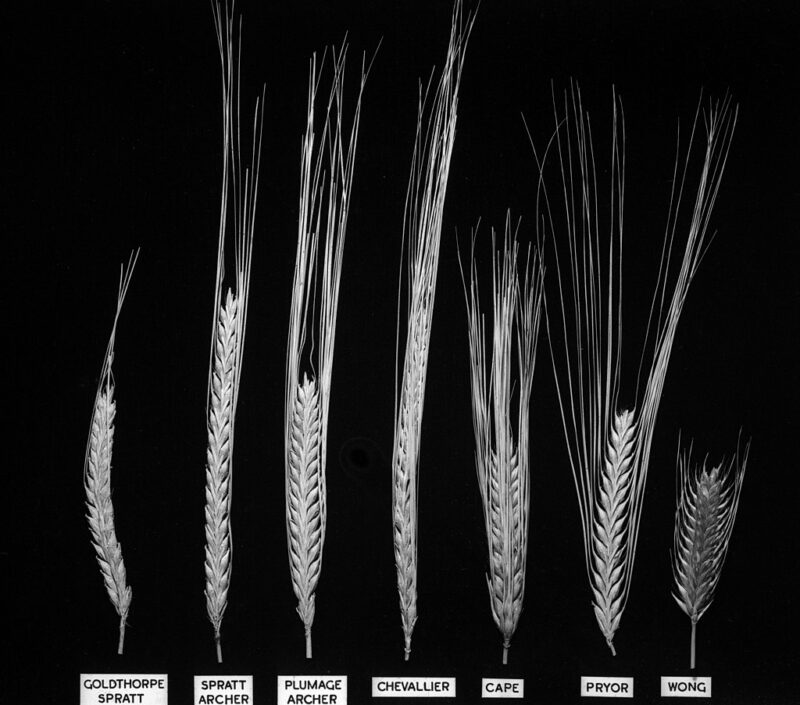 There is great variety among barley plants that are bred to be different. Can these differences also be generated through fungal partnerships?

It’s not only been through simple breeding crosses, either – some scientists have created new varietals by bombarding barley seeds with ionising radiation in atomic gardens (I think this technique has fallen out of fashion these days). The results of their efforts have been astounding over the decades – and there are now many cultivars of barley with many romantic names. ‘Bere’, ‘Golden Promise’ & ‘Maris Otter’ being a few notable British ones. Each has their own strengths and weaknesses. But changing a plant’s genes can be a tricky and laborious process.

So, instead of focusing just on the plant that we can see above the soil, instead of dowsing defenceless wee barley stalks in escalating doses of radiation (again, I have to grant that people probably don’t do that anymore) – let’s think about the world under the soil. Find a nice, productive breed of barley – a ‘Concerto’, or a ‘Laureate’ will do – and see how it enjoys the company of a few different fungal species, like… (I’m no mycologist, and I’ll demonstrate that by picking a few mushroom names at random) ‘Boletus’, ‘Shiitake’ or ‘Magic’. Measure some yields, scan for sugar content and then -this is vitally important- put me on the human tasting panel when you make the whisky. Or the cream of mushroom soup.

Distilleries take their barley supply seriously. On the one hand, Scottish whisky makers need robust, productive and inexpensive bolls of sweet grain to make their whisky. On the other, we’re all worried about land use, soil health and the use of artificial fertilisers. Perhaps a few more experiments into mycorrhizal partnerships could help satisfy both needs, and keep whisky production methods relevant in a world that never stands still. 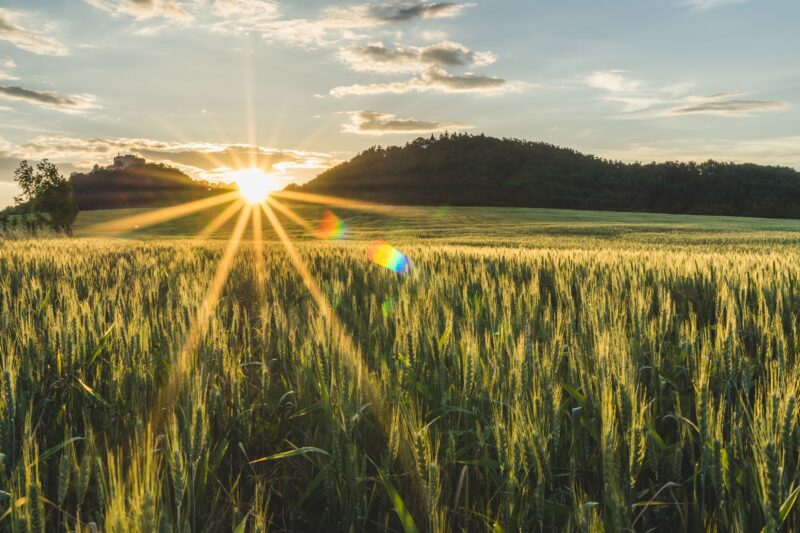 A beautiful sight above ground – but there’s a lot more happening out of sight in the soil below.

*Orrell P. 2018: Linking Above and Below-Ground Interactions in Agro-Ecosystems: An Ecological Network Approach

The post This One Weird Mushroom Trick Might Make Your Barley Better appeared first on Cask88 Store.

This One Weird Mushroom Trick Might Make Your Barley Better