Arabic Salad Recipe is a traditional Middle Eastern salad that is mixed with cucumber, tomatoes, parsley, olive oil and sumac spices. It is commonly serve as a side dish for main meals that has meat and rice dishes. 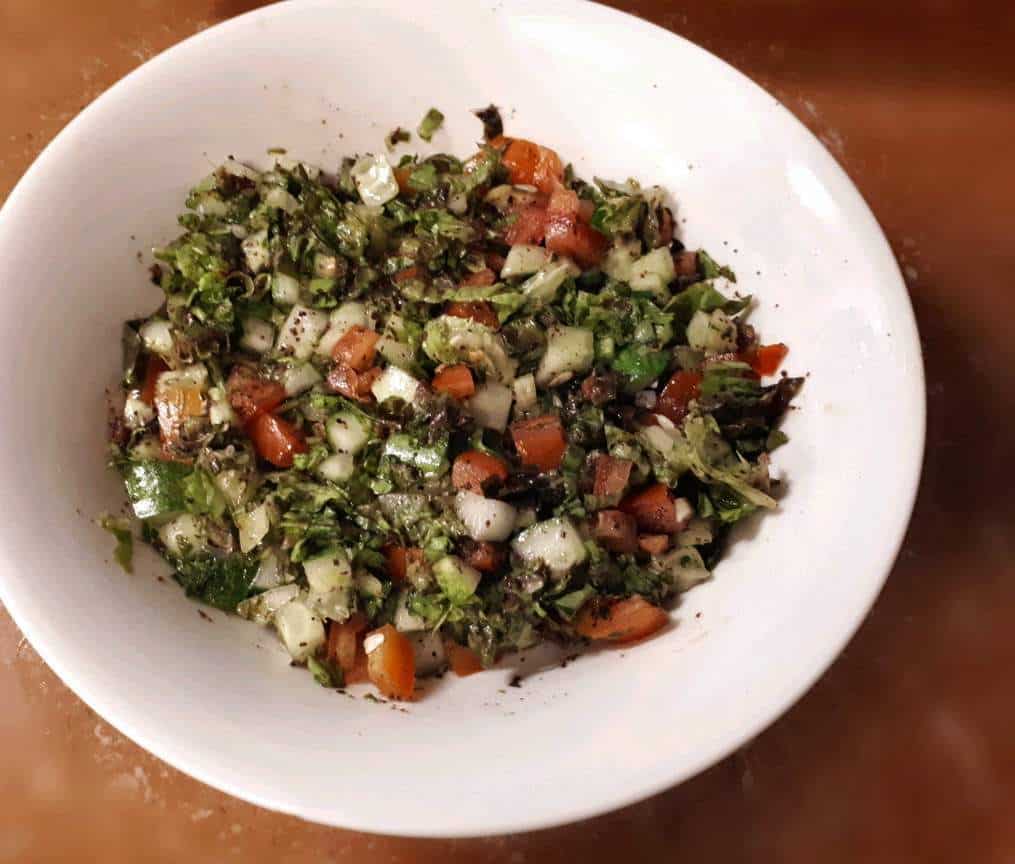 As a half Middle Eastern, I love Arabic food since their foods are flavorful and rich in spices. Furthermore, their foods are very healthy and delicious. For example, in Jordan and Levant, the locals love adding olive oil, vegetables, sumac and other spices in their dish.

Apparently, they are many kinds of Middle Eastern Salad since some of them use specific type of cheese or crispy pita bread. But in this post, I will be showing you a very simple yet a traditional Middle Eastern Arabic Salad Recipe.

There are several ingredients you need when making a delicious arabic salad recipe. They are not really that much and it is even simple.

Firstly, these are the list of chopped vegetables I used for my salad:

In some middle eastern salads, they also add other vegetables such as carrots and onions. But I am not fan of these vegetables so I don’t add them in my salad.

Secondly, I am using sumac spices and extra virgin olive oil in my salad. These are two important ingredients that will give you a rich sour flavor, and without them, you can make an Arab salad. The sumac spices are found in any middle eastern or Arabic grocery stores.

Lastly, I need salt and black pepper for seasoning the salad. These two ingredients must be done right before serving, or else the salad will be watery.

Note: The sumac spice gives a sour flavor of the salad. If you don’t have sumac, you can just use lemon.

What do I serve with this salad recipe?

This Arabic Salad Recipe is a vegetarian side dish that is eaten and serve with other main course meal. This includes meat, seafood and rice recipes.

Here are the list of Middle Eastern food recipes you can serve and eat with this Arab Salad:

In addition to that, I love adding salads in my sandwiches which I use my Greek flatbread or other pita bread.

Note: You don’t have to serve this salad with only Middle Eastern Food. Any foreign dish with meat, seafood and rice are perfect. Also, this dish is a vegan friendly if you don’t eat meat.

What can I add in my Arabic salad?

Aside from adding vegetables in this middle eastern salad, you can also add other toppings to make your salad delicious.

For example, in Lebanese and other Levantine cuisines, feta cheese or crispy pita bread are commonly added in this salad. The name of this salad recipe is called Fattoush Salad. I have eaten that salad several times which is one of the best salads I tried in my life.

Lastly, I love adding Yogurt Garlic Sauce as a dressing for my salad. The yogurt sauce blends perfectly with the salad which I highly recommend to eat this using pita bread. Not only it taste good but it is very healthy.

The step to make an Arabic Salad is very easy and straight forward.

Firstly, chop the cucumber, tomatoes, lettuce and parsley. Once you are done chopping the vegetables, transfer them into a large bowl.

Add olive oil and sumac, and give it a quick mix. Lastly, you add the salt and black pepper for taste. Serve them with any main course meal that has rice and meat and you are done.

For full instruction of the recipe here is the step below: 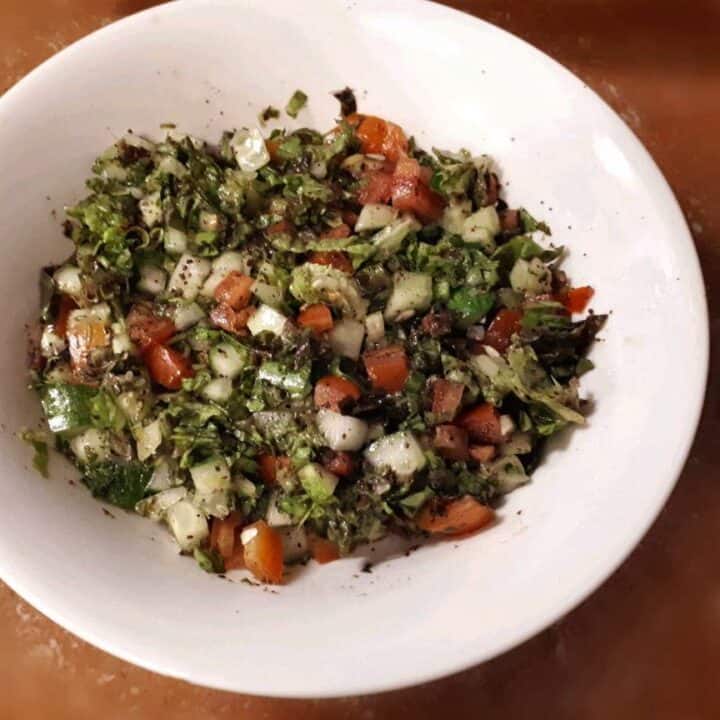 This is a traditional middle eastern salad which is mixed with cucumbers, tomatoes, parsley, lettuce, sumac spices and olive oil.

Did you make this recipe?