8 Wisconsin Craft Breweries Where Your Growler Will Never Run Dry

Wisconsin is No. 14 for total breweries in the U.S. and ranks 12th for breweries per capita. There’s more to Wisconsin than its cheese.

Before you head out, make sure to check the brewery’s website or Facebook page for hours and availability. Many of these operations are to-go only due to COVID-19.

These 8 Wisconsin craft breweries are listed in order of barrels produced based on data published in the Kansas City Business Journal.

A quick 45 minutes from Madison, Wisconsin, Minhas Craft Brewery is the second oldest brewery in the U.S. and the oldest in the Midwest. As one of America’s top ten largest breweries, Minhas creates a variety of craft and premium beers as well as flavored malt beverages and sodas.

Try the award-winning Huber Bock, a bottom fermenting lager with creamy texture and rich flavor, or a can from the Boxer Lager series, which features a gluten-free option.

Make a day out of your trip to Minhas with a brewery tour and stop at the Historic World Of Beer Memorabilia Museum, the largest brewery memorabilia museum in the U.S. Don’t miss Minhas Distillery, the brewery’s distilling arm focused on artisan spirits and liquors. Monroe is known for its swiss cheese, so make sure to grab a slice, or a wheel, while you’re in town. 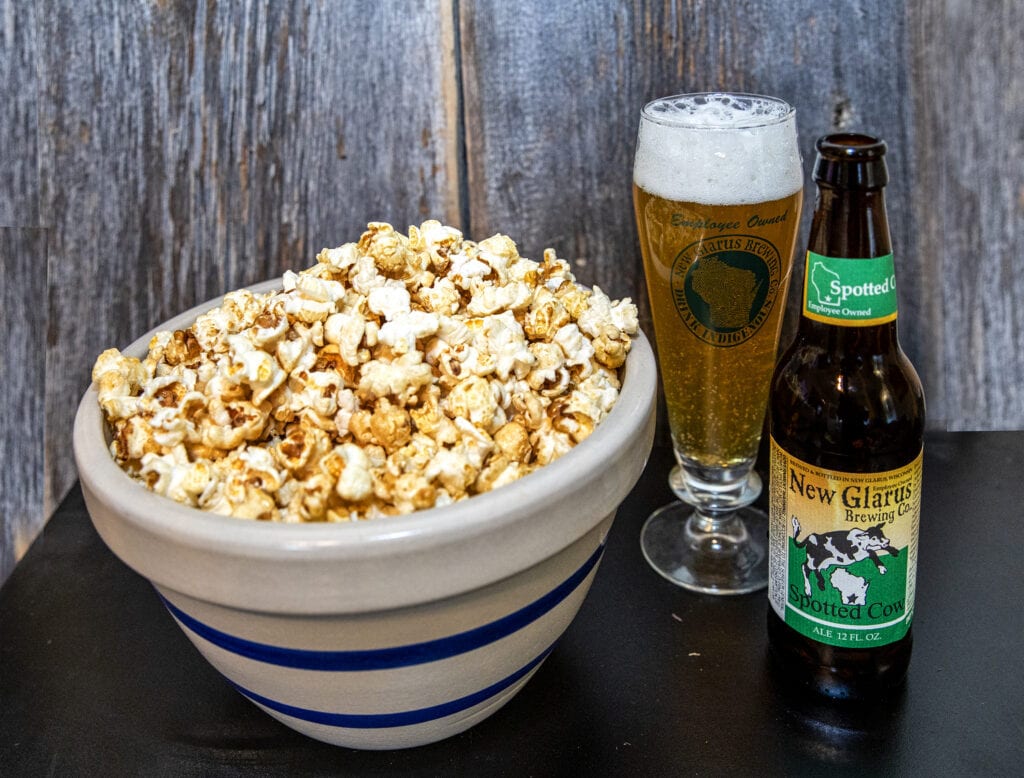 Grab a bottle of fruity Spotted Cow and pair it with something salty or savory. Photo credit: New Glarus Brewing Company

New Glarus produces six year round beers and a variety of seasonal options, all available only in Wisconsin. Any time of the year, beer enthusiasts can try the Spotted Cow, a cask-conditioned Wisconsin farmhouse ale, or the Wisconsin Belgian Red, made with Door County Cherries. During a cold northern winter, sip on a glass of Cabin Fever, a Wisconsin-style honey bock made with clover honey.

Beer enthusiasts can know they’re drinking with the environment in mind when they crack open a bottle of New Glarus beer. A 2019 Wisconsin State Journal story reported that the brewery has invested more than $100,000 in energy-saving efforts in recent years.

Brewing since 1857, time and experience are on the side of Stevens Point Brewery. The Point Special, a Pilsner and the brewery’s flagship beer, provided a respite to troops during the Civil War and continues to please beer drinkers today.

If a hard drink won’t whet your whistle, Stevens Point produces a line of gourmet sodas. The Point Premium Root Beer, a popular flavor, is made with 100% real sugar, all-natural vanilla and Wisconsin honey.

With a selection of five year round brews and just as many seasonal releases, there’s surely something for every beer drinker. The brewery distributes across the U.S., so chances are a taste of Stevens Point is available near you.

What started as a homebrewed sibling rivalry has turned into over 30 years of brewing alongside the Milwaukee River. Known for its ales and lagers as well as its self-proclaimed “infamous” brewery tour, Lakefront Brewery is a place beer enthusiasts can have fun.

Brewing more than 20 different beers and distributing in over 30 states (as well as to a handful of other countries), Lakefront offers something for every beer drinker — even those who are gluten-conscious.

In April 2020, Lakefront announced its status as a Certified B Corporation, meaning the business meets the highest standards of environmental and social performance. It’s the first brewery in Wisconsin, and the 22nd in the world, to achieve this ranking.

Founded in 1984 brewing traditional German-style lagers, Capital Brewery has expanded its styles to include American-style ales, barrel-aged brews and a variety of IPAs over the last three decades of brewing.

Try Capital’s most popular year round release, the Wisconsin Amber, a rich lager, which the brewery says has become “synonymous with all things Wisconsin.” Adventurous drinkers will appreciate the brewery’s seasonal and limited release selection, including options like the Dark Doppelbock, a toasty beer that pays tribute to brewing’s history.

Sustainability is important to Capital. In 2014 the brewery installed solar electric panels and continues to provide spent grain to a local farmer, who uses it as cattle feed. That’s only scratching the surface on the ways Capital has made sustainability an integrated part of its mission.

Founded by a former third-shift supervisor at the nearby Pabst plant, Sprecher Brewing Company was Milwaukee’s first microbrewery post-Prohibition. Randy Sprecher built the brewery’s original gas-fired brew kettle back in 1984. The tradition of “fire-brewed” beers continues at the brewery today and makes Sprecher a bucket-list stop on your tour of Wisconsin craft breweries.

Sprecher discovered an appreciation for German beers during a stint in the country on military business. Thus, most of Sprecher’s lineup is brewed in German styles. Try Specher’s signature, rich Black Bavarian or the Hefe Weiss unfiltered wheat ale, brewed with a German yeast culture.

Central Waters Brewing Company is home to the largest bourbon barrel-aging facility in Wisconsin and regularly delivers barrel-aged beers as well as classic ales and seasonal brews. The brewery is known for its annual River Run event, which coincides with the release of its coveted Black Gold barrel-aged beer.

Central Waters’ beer lineup features a porter and stout alongside a selection of year round ales, such as the mellow and malty Ouisconsing Red Ale, which gets its name from the Algonquin word for the Wisconsin River. Seasonally the brewery creates beers like the Sichuan Dragonfruit NEIPA, a fruit-forward New England-style IPA brewed with Dragonfruit and Sichuan Peppercorns, and the Fat Elvis, a robust imperial stout.

The Potosi valley was formerly known as Snake Hollow thanks to an abundant rattlesnake population. Photo credit: Potosi Brewing Company

Potosi Brewing Company calls its city “Beer’s Hometown.” Established in 1852, the brewery is owned by the Potosi Foundation, a 501(c)(3) nonprofit focused on propelling economic opportunity in and around the city.

Potosi brews a core lineup with additional seasonal and barrel-aged beers available for a limited time. Kick back with a Snake Hollow IPA, a fruity and bright Midwest pale ale named after the city’s former nomer (thanks to an abundance of rattlesnakes).

When you visit Potosi, plan to spend the day: The brewery property includes a brewpub, restaurant, beer garden, gift shop, and is home to both the National Brewery Museum and Library and Great River Road Interpretive Center. Plan your trip around one of the brewery’s popular events — the annual Potosi Brewfest, Tour de Pints bike ride and the Dubuque on Ice Brewfest.

8 Wisconsin Craft Breweries Where Your Growler Will Never Run Dry