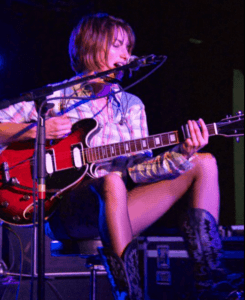 An alternative funk mix keeps Brick groupies coming back to hear more local and regional live bands at the Brick.

Before covid hit, bar owner Sheri Parr normally booked two local and one regional band a week to keep regulars on their toes. Parr would mix things up with country, honky-tonk, blues, and up-and-coming garage bands from the area. The Old Crows, Cowtown Playboys, Dr. John, 3 Bricks Shy, and the John McKenna Band have performed at the Brick where the stage gets as much action as the bar.

The Brick’s sound system is said to be just as smoking as the bar’s sweet potato fries. If you drop by, tell us what you think of the sound and the Brick Girls who work the bar.

Serving the Blues with a Side of BBQ Since 1990

B.B.’s Lawnside BBQ headlines local, regional, and some national acts six days a week. Joe Perry from Aerosmith has played at B.B.’s with Lee McBee. Diane “Mama” Ray and 4 Fried Chickens and a Coke are regular acts. Both Amanda and Samantha Fish have played at B.B.’s, as well as the Confessors, Cross-Eyed Cat, and Trampled Under Foot.

Starting January 14, lounge singer Al Latta returns to the stage at the Cigar Box. Al and his lounge act stir the juices of the crowd that feed off his shtick. 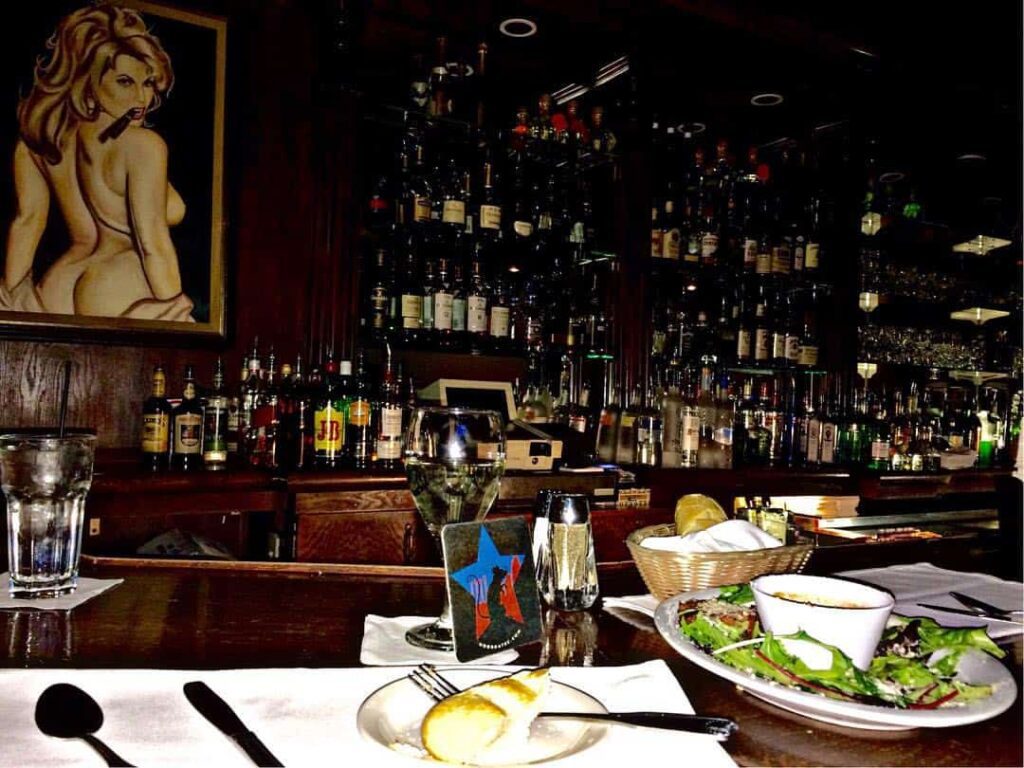 Accompanied not by a band, but a simple amplifier and minidisc player, Latta gets the crowd involved. He covers standards by Sinatra, Louis Armstrong, Sammy Davis Jr., and Neil Diamond often changing outfits in the kitchen to play homage to golden voices of the Rat Pack era.

“Request a song and he’ll sing it. Buy him a shot and he’ll take it, again and again.” ~Ben Paynter, The Pitch

If you have a wad of cash to burn through, go next doors to Temptations. There’s a $19 cover charge and $20 for a lap dance. Drinks are non-alcoholic drinks and pricey, too, so get your buzz on at the Cigar Box.

Where a Crowd of Bikers Can’t Go Wrong

Get over yourself. Dives like Grinders are all-accepting, adult playgrounds. You’ll easily blend with a mix a people from bikers to bookkeepers. Go ahead feel free to fade into the background or fly your freak flag. Just don’t be a snob or even think about starting a fight, because there’s never been an altercation at Grinders. According to the bouncers, the only time the police have ever stepped in to assist, is when a woman refused to put her top back on at a David Allan Coe concert.

Enjoy a legendary Philly Cheese Sandwich or NY style pizza, then head out back to soak up live music in Grinder’s cedar-chip-lined Wally World, called Grinders KC. This one city block of live entertainment draws around 300,000 people a year to hear bands including the Black Keys, George Thoroughbred, Reverend Horton Heat, Joss Stone, and Snoop Dog. Lucinda Williams, Old 97s, and the Avett Brothers have also rocked the stage of this rogue music spot!

75 Years of Dancing in the Streets

Kelly’s Westport Inn is a Kansas City tradition. The building has been designated as a national historic landmark. Family-owned and operated for five decades, Kelly’s is an Irish pub like no other, serving a diverse crowd and, during non-pandemic times, offering live music. If you’re in town, check if the local Celtic band Flannigan’s Right Hook is playing. The lead fiddler really tears it up. 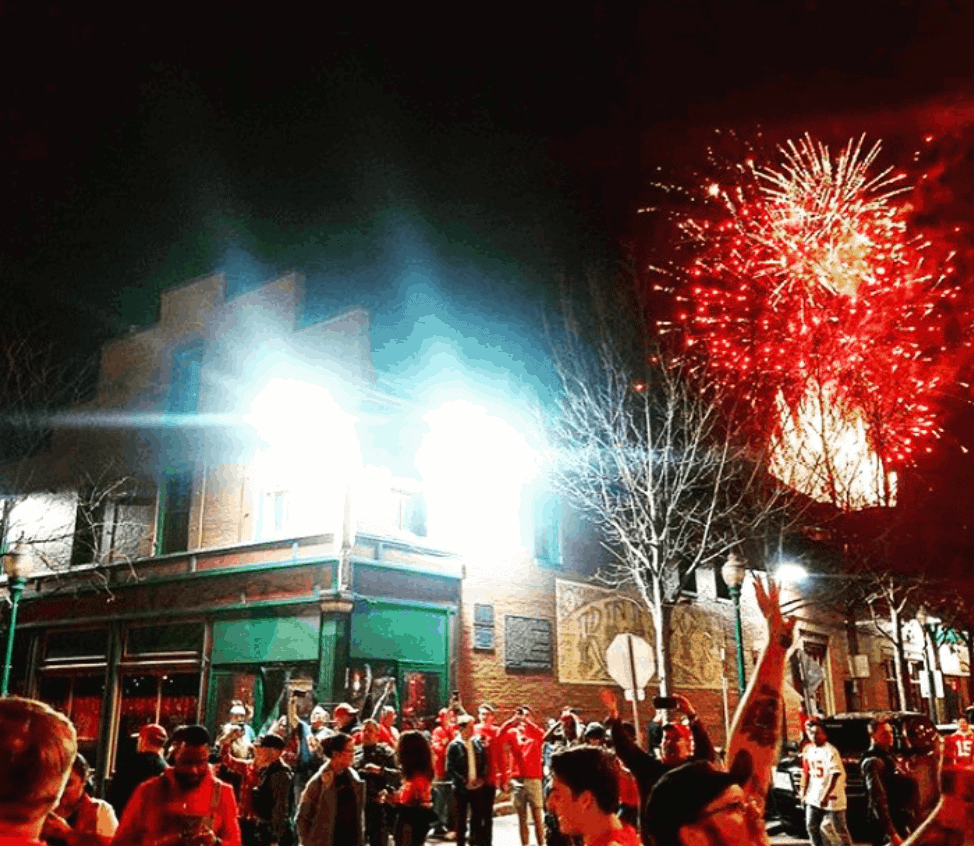 In 2010, Kelly’s opened Randal’s Rooftop, a rooftop deck named after founder Randal Kelly. The 1,125-square-foot deck offers an awesome view of Westport, and in the winter the deck is enclosed and heated. It also has multiple flat-screen TVs, fans and heaters, air-conditioned restrooms, and a full-service bar.

Three Stages, 2 ATMs, and one Really Loud Train Within a Yard of the Rear Stage

Over the railroad tracks and through the hood, you’ll find musical nirvana at Knuckleheads Saloon. Follow the sound of guitar riffs and the wail of the blues legends because your GPS may not work in this neck of the woods. 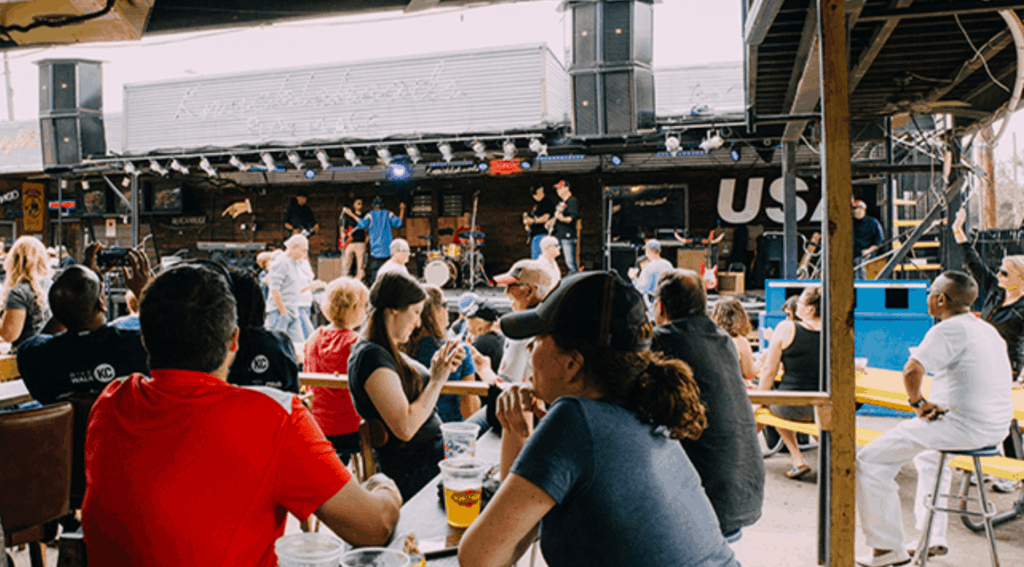 If finding your way through the industrial abyss scares you, call for Knuckleheads complimentary shuttle service. With a little advance notice and a tip, you can catch it within 10-mile radius of the bar and avoid getting lost. A common pick-up point is Garozzo’s Italian Restaurant at 526 Harrison St. in Columbus Park also known as Little Italy.

Owner Frank Hicks segued motorcycle repairs into a blues bar that made the mourning of the closing of Kansas City former blues bar, the Grand Emporium, less painful.

Knuckleheads is the only bar in Kansas City or the Midwest to snag the prestigious Keeping Blues Alive award by the National Blues Foundation.

Leon Russell, Merle Haggard, Junior Brown, Ray Price, Rodney Crowell and Chubby Carrier and Bayou Swamp Band have played on one of the three stages at this rickety, honky-tonk bar. Bikers, hipsters and businessmen gather five days a week to blend into the crowd and wash away the stink of the week with some good music.

The songs range from blues to gospel and Rev. Carl occasionally throws in a praise Jesus and invites audience members to check out his church-based services.

The audience is made up of what appears to be half AA members sipping hot coffee and half blues lovers thirsty for a little good word to wash back with their Tall Boy.

Where Waitresses Sling and Sing

Opened in 1978, this cocktail lounge was originally known as Inge’s.

Other than Broadway show posters splashing color onto the dark walls, the Piano Room is not much to look other than the naked picture of Persephone (Goddess Queen of the Underworld) behind the bar. However, patrons don’t come to look; they come to listen. 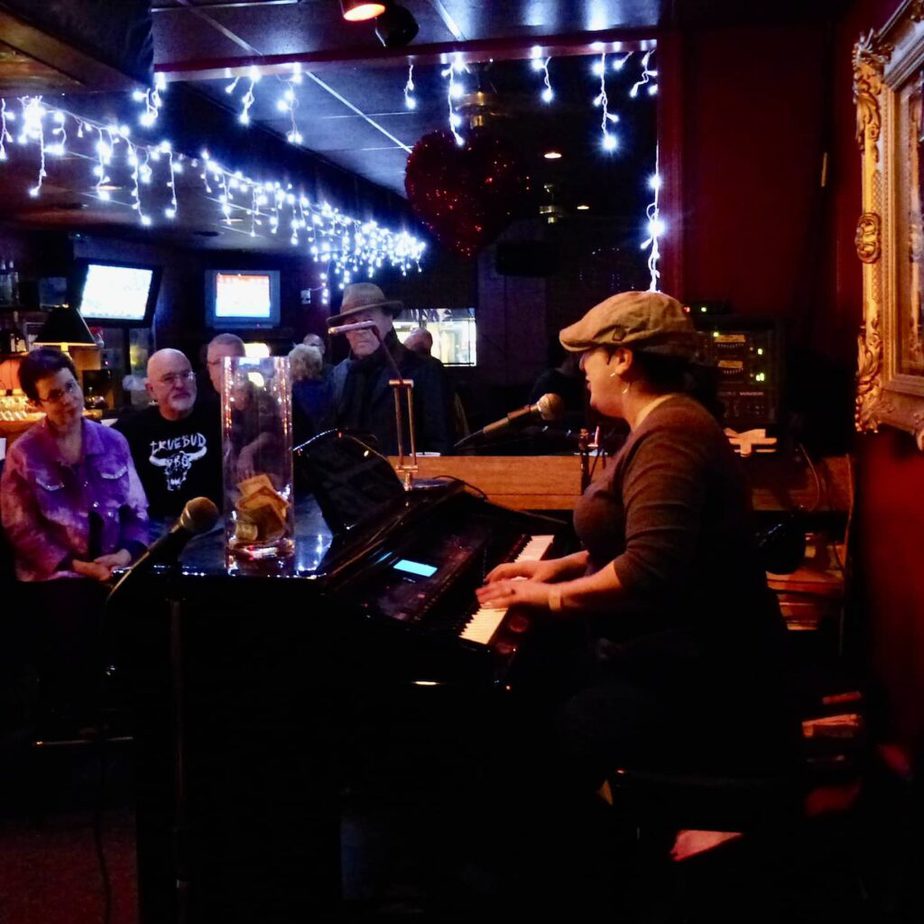 Heather Cole sings, slings, and plays the keyboard at the Piano Room. Photo by Brenda Geiger.

Alan Stribling, who earned his stripes tickling the ivories on the Princess Cruise Line for several years, also entertains at the Piano Room. Stribling plays pop songs, standards, and show tunes, and sings everything from Cole Porter to Led Zeppelin.

All this musical talent happens under one roof in a strip shop in south Kansas City behind a Church’s Chicken. The obscure location makes the music inside even sweeter, and it’s delivered week after week for the price of a round of drinks. The Piano Room has never charged a cover, so tip generously.

Grab the LifeSaver in the Restroom in Case You Go Overboard

Originally a speakeasy located at 411 East 10th Street in between Oak and Locust in downtown Kansas City, The Ship was a grand lounge opened shortly after the repeal of Prohibition in 1935. Late 1995, the city announced plans to bulldoze the bar to make room for a park.

Dance the night on a real ship deck at The Ship: Photo Credit: Scooter’s Bar Guide

A local by the name of Adam Jones salvaged most of the original interior before the building was demolished.

In 2004, current Ship Owners Josh Mobley and Bob Asher, recovered the treasures from the basement of a West Bottoms warehouse and began carefully reconstructing The Ship as close to the original details as possible in her new location in the heart of the West Bottoms.

Check The Ship’s website to learn about live music or private events. Pre-covid, it hosted jazz and even David Bowie cover bands. The Ship’s food and cocktail menu run deep. Find the entrance in the alley and wear goulashes if it’s raining. That potholes are knee deep.

NO MUSIC, ALL BOOZE

If you’re in the mood for cheap drinks not music, check out one of these notorious Kansas City dive bars instead.