Missi Roti is a popular Indian flat bread  made with whole wheat flour (atta), gram flour (besan) and other herbs and spice powder. Herbs like ginger, green chilli, fenugreek leaves and cilantro leaves are used to  flavour this roti. 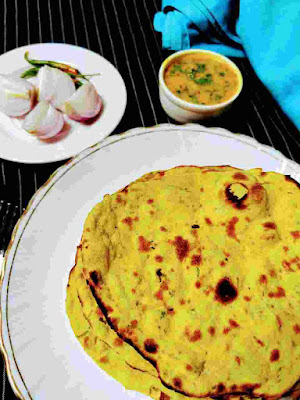 It is a household name in Punjab and Rajasthan.  In Punjab this roti is generally cooked in a charcoal tandoor, which makes it crisp and light brown. Due to uses of chilli this roti is little bit spicy in taste and can be served with dal and other curries as well.

You can easily make this roti at home like restaurant or dhaba style. The main ingredients are wheat flour, gram flour, onion and chilli.

To give it a restaurant style flavour use dry Fenugreek leaves and hing powder. The use of hing powder is totally optional but it can enhance the taste to double.

If you take equal or more quality of besan to make the dough then the resulting dough will become more sticky to hands as well as to the rolling pin.
You can either cook this roti using a iron tawa or a pan. The best way to cook a Missi roti is using a charcoal tandoor.
Another way to cook it is over the direct gas flame like we make phulka roti.

Steps to make the recipe 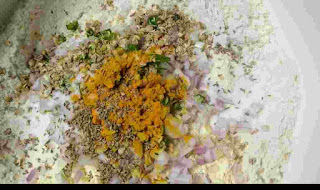 Grease some oil and knead further for 2 minutes. Cover and set aside for 10 min to set. 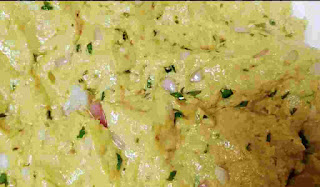 Now divide the dough into equal parts. Dust them with some wheat flour and roll between the palm of hands to make round shaped balls. 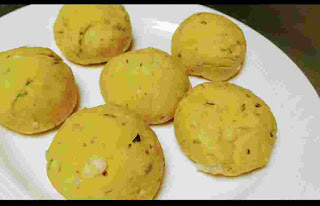 Take one ball and dust with some flour on both sides. Press slightly and roll using a roller pin into a 5 to 6 inch diameter round shaped roti. 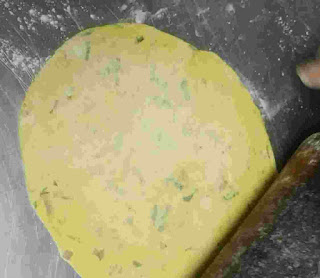 Heat a tawa or pan over medium heat flame fire. When it become hot place the rolled roti over it.

When some tiny small bubbles start to rise over the surface of the roti, flip it to another side. 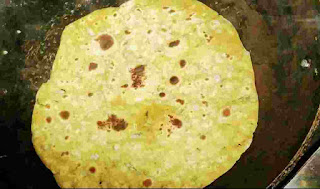 Cook for sometime and apply some ghee or butter over it and flip.

Similarly apply ghee or butter on the other side and flip. 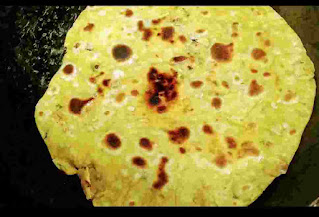 Remove and keep in a roti basket or serve hot immediately.

Cook the rest of the roti like this way. 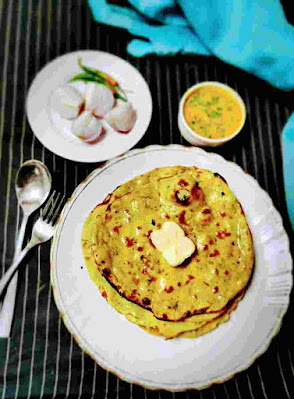 Use of tandoor is very common in Punjabi households. They cook this roti in tandoor which makes it more crisp and easily digestible.

To make roti in a tandoor the dough should be little soft and smooth compare to regular chapati dough. Rotis are flatten by the palm of hands so the dough need to be soft. Ingredients remains same. The roti are roasted over medium heat charcoal fire till crisp golden. 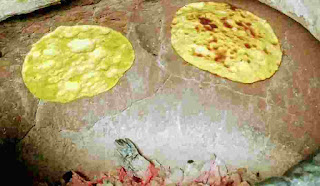 Besan also known as chickpea flour or gram flour in this roti has some wonderful health benefits. And one of this benefits is weight loss.

Besan helps in faster calorie burn in the body due to the lower levels of glycemic index.

Eating Missi roti will boost the fat burning and increase nutritional level. Including in diet will reduce calorie intake in a day. 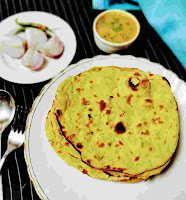 Missi roti is a popular Indian flat breads made by using whole wheat flour with chickpea flour (besan) and other herbs and spices. It is little bit spicy and can be served with dal or any other curries.

Benefits of Healthy Food on The Skin