Bhindi Masala is a popular recipe made with bhindi, tomatoes, onion and some spices and herbs. Below you can read the step by step method with photos and video to make bhindi masala at home. 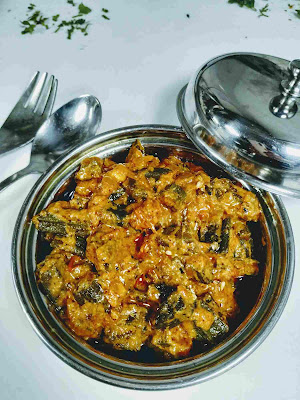 Bhindi also known as okra or lady finger is considered as a healthy vegetable and a rich source of vitamins.  It is one of the low calorie vegetable that one should include in their diets regularly.

You can many popular dishes with bhindi like bhindi bhurji, bhindi do pyaza, Kurkure bhindi and bharwa bhindi.

My personal favourite is bhindi bhurji and my wife love bharwa bhindi. The dishes made from bhindi are best to served with homemade roti or chapati. Bhindi masala is very popular in restaurant and dhaba. This bhindi masala recipe is a restaurant style recipe, you can make it as dhaba style as well by adding some whisked curd in the masala gravy.

Steps to make the recipe

Cutting and frying the bhindi

Wash and clean the bhindi nicely and pat them dry completely by using kitchen towel or paper. These will help to keep the bhindi less slimy. Apart from this we will use few more steps to keep them less slimy. 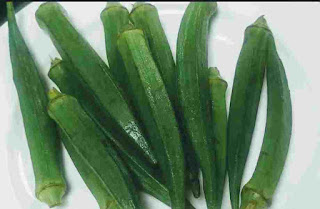 1. Chop off the head and tail part from all bhindi and cut each of  them into two or three parts. Apply some salt and turmeric powder nicely and keep for 10 minutes. 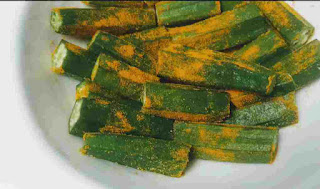 2. After that heat 1 teaspoon oil in a pan over medium heat flame and shallow fry them till 80% done from all sides. Remove them in a bowl and keep aside to use in masala gravy later. If you are preparing for bulk or large quantities then you can deep fry them as well. Generally in restaurant and dhaba, bhindi is deep fried for the recipe. 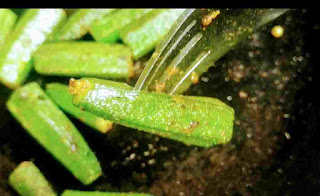 Roughly sliced the tomato and half of a medium size onion. Using a mixer grinder (blender) make a fine puree. I would love to saute the tomato and onion for few minutes and then make the puree. This will enhance the taste of the masala gravy more. In restaurants they make separate tomato gravy, chopped onion gravy and fried onion paste gravy. So their dishes taste better. 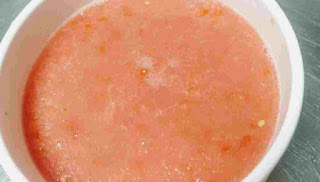 Now heat 2 teaspoon oil in the same pan over medium heat flame and fry cumin seeds till sizzles. Add chopped onions and fry till light brown. Then add ginger garlic paste and fry till their raw smell goes off. 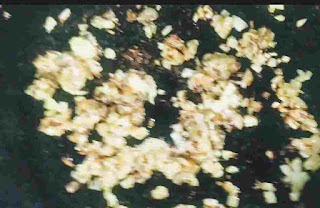 Add red chilli powder, turmeric powder and coriander powder and stir for few seconds. Pour some water and cook the masala for one minute. 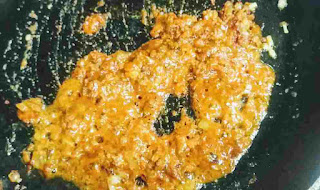 Now pour the prepared tomato onion puree into the pan and stir to mix nicely with the masala. Cook for 4 to 5 minutes or till oil start to separate over medium flame. If you are using raw tomato onion puree then cook for some more time. 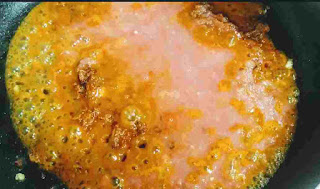 After that add the fried bhindi into the above masala and mix nicely so that all the okra get well coated with the masala. Add salt as per your taste and cook them for 2 minutes under slow flame. 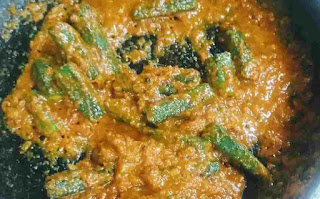 Add some garam masala into bhindi masala for a nice aromatic flavours. Sprinkle some  chopped coriander leaves and remove them in a serving bowl. 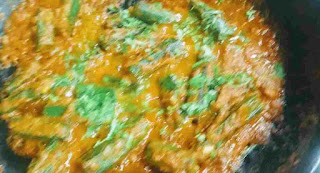 Serve the bhindi masala hot along with roti, naan and steam rice.

The above step where we pour the tomato puree is very important as you can modify this recipe into some other recipes from this step.

You can make bhindi masala gravy dhaba style by adding half cup whisked curd(yoghurt) into the masala under slow flame heat. Cook them for 2 to 3 minutes further or till the curd get well incorporated with the masala. Then add the fried bhindi into the curd based masala gravy and cook for 2 minutes. Add salt and garam masala. Sprinkle fresh chopped coriander leaves and remove the bhindi masala gravy dhaba style. You can adjust the thickness of the gravy by adding water. In dhaba style the bhindi are kept little bit long in the gravy by cutting them into one by two pieces. 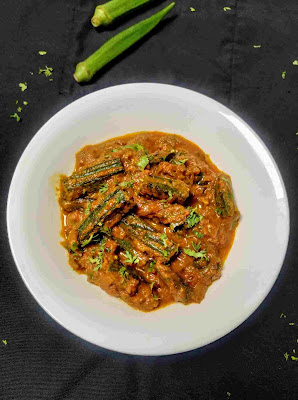 Bhindi masala dry recipe can also be made from the above step after pouring the tomato puree. After cooking the tomato puree add the fried bhindi and stir to mix nicely. Add salt and garam masala and cook till the masala get well coated with the bhindi and become dry under slow flame.  Sprinkle coriander leaves and remove to serve.

This is another popular version of bhindi masala where bhindi are stuffed with some spiced fillings. You can use coconut, peanut, green chili, ginger and coriander leaves to make the fillings. Just grind them in a mixer and add some salt, chilli powder and little oil and stuff them.

My wife only use red chilli powder, cumin powder, garam masala and salt with little oil to make the fillings.

Cut each bhindi length wise to make a opening and then with the help of a small knife stuff the fillings inside them. And shallow fry them till crisp.

Bhindi masala is a popular north Indian dish made with bhindi, tomato, onion and spices. It can be prepared as dry bhindi masala and dhaba style bhindi masala.

Reaching Wayanad and Hike to The Edakkal Caves