Aged 64, Eric Tsang is an actor, director and popular emcee known for his bawdy persona. It doesn’t need a feng-shui master to predict that 2018 will be a terrible year for the well-known Cantonese comedian from Hong Kong. From mainland China to the United States, the A-list Asian actor attracts the attention for the wrong reason – accused of raping an actress in the nineties and drugging multiple models.

If this sounds too familiar, that’s because it reminds you of Hollywood sex predator Harvey Weinstein. Apparently, the #MeToo movement has spread to Asia and Mr. Tsang becomes the first casualty in what appears to be a major scandal to hit Asia entertainment industry. The allegations first surfaced publicly back in 2013 when a video was released by Hong Kong-based gossip magazine Next Magazine.

Yammie Lam ( 藍潔瑛 ), a former Hong Kong actress, was recorded in the video in which she claimed she had been raped by two famous and powerful Hong Kong entertainment figures in the 1990s, which derailed her career and caused her to attempt suicide. The two actors named were later revealed to be Eric Tsang ( 曾志偉 ) and the late actor Alan Tang ( 鄧光榮 ). 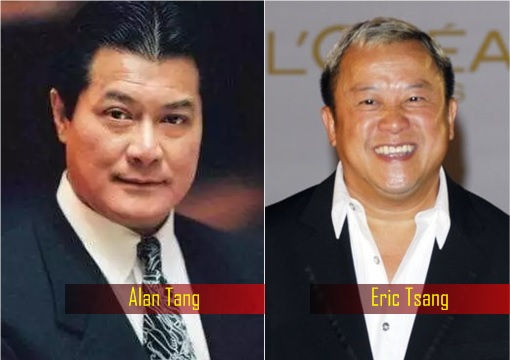 The beauty Yammie was once known as one of the five “Dragon Girls” at popular Hong Kong channel Television Broadcasts Limited (TVB). In the video released in 2013, she said there was no reason for her to lie as it happened about 20 years or 30 years ago. Ms. Lam also claimed that the incident took place in Singapore when she was invited to go on a movie set visit in the city-state.

While the original video concealed the names of the alleged offenders, the name of Eric Tsang and Alan Tang were disclosed a year later in 2014 by Hong Kong-based media personality and businessman Stephen Shiu Yeuk-yuen who founded Hong Kong Reporter in 2004. One of the suspects, Alan Tang, died in 2011 of a heart attack, leaving Eric Tsang to face the music.

Ms. Lam’s acting career fizzled out in the mid-1990s as she suffered from worsening mental disorders, speculated as a result of the rape. In 2006, she was declared bankrupt and since then has been living on state monthly welfare of HK$3,700 ($473; £342; RM1,874). In 2007, she was spotted wandering around alone on the streets, smoking heavily and appeared to be lost. 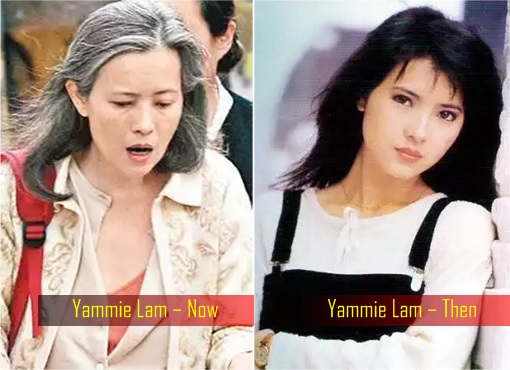 If it’s true that Eric Tsang was a sex predator like Harvey Weinstein, the rape of Yammie Lam certainly was not his first and only offence. On 11 January 2018, Grace Han ( 韓穎華 ), former chairman of Ford Models in Asia, brought back the sex scandal into the public eye when she unleashed a no-holds-barred about Eric Tsang’s despicable sexual assault.

Posting a long comment about Eric Tsang’s sexual assault allegations, Grace has claimed that Mr. Tsang had made sexual advances toward her fashion model trainees too. She wrote using her Weibo account – “This despicable man has made sexual advances on female artists more than once. Everyone in the entertainment industry knows about this.”

Grace alleged that Tsang had at least on one occasion taken a group of models to a karaoke lounge, with the promise of meeting a famous celebrity, and slipped drugs into their drinks. She wrote that one model was able to escape by forcing herself to throw up, but returned from the bathroom to see other girls had collapsed unconscious.

Her story goes – “I’ve taught my students that, if you’re in an unknown area and a powerful person invites you to a party, don’t follow them! This bastard tried to talk with her, but [my] student ignored him. It wasn’t until that bastard told her that a famous celebrity would also be going, when that child had a change of heart. One of my students fell for that.”

Grace’s story continued – “I’ve taught my students that if you ever leave for the restroom and come back, don’t touch the drinks anymore. The child remembered what her teacher taught her, and ran to the restroom to purge it out. When she got back, the other six models all fell. The men at the scene carried each of them away, except for my student.”

Grace Han’s girl student shared her story – “Auntie Han, I was freezing, my hands were shaking. At this time, Eric Tsang and another bastard who spoke Cantonese said: Why isn’t this working? Once the child heard it, she dropped to the floor and allowed them to carry her to the car, but she used the tricks I taught her to escape.” 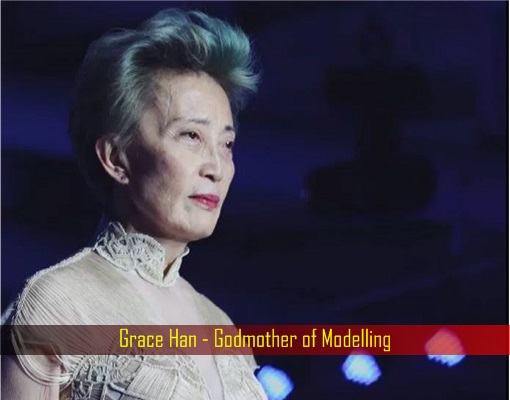 Immediately after Grace’s revelation, a new rumour starts spreading about an alleged inappropriate relationship between Eric Tsang with Chinese actress Zhou Dongyu ( 周冬雨 ), who won the Golden Horse best actress award in 2016 for her role in “Soul Mate”, directed by Tsang’s son Derek. Was Zhou Dongyu sexually harassed by Eric Tsang too, or was there a sex trade in exchange for winning the award?

Eric Tsang, of course, has denied all allegations of sexual misconduct and said he has filed a lawsuit against Grace Han. Flanked by his lawyer and son Derek, Eric Tsang told reporters – “Regarding the circulated ‘Eric Tsang sexually harassed Yammie Lam’ reports, I can tell everyone it is completely fabricated. Respecting women is a value I support.”

Tsang said – These are very serious accusations against me. They have had an effect on my reputation. What has upset me the most is that my friends, my beloved family, even teammates on the celebrity soccer team have been affected as well. That’s why I feel the need to step forward and clarify these rumours publicly. As for Grace Han’s inaccurate Weibo post, I have already filed a lawsuit.” 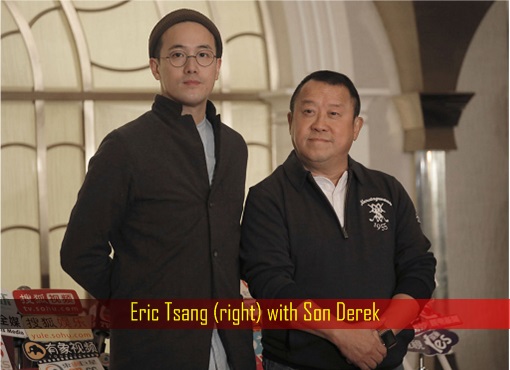 Following Tsang’s Wednesday statement, 70-year-old Grace Han, known as the “Godmother of Modelling” in mainland China, responded on Weibo writing – “Holding a press conference means [you are] a gentleman? Worried for this old lady? No need, the old lady dares to publicly criticize because this incident occurred. Sue me? I’m sitting waiting.”

If Harvey Weinstein is any indicator, chances are Eric Tsang Chi-Wai could be in deep trouble. Sure, he can easily challenge the integrity of a mentally disturbed Yammie Lam, whom he was accused of having raped decades ago. However, Grace Han said she will get witnesses at the karaoke bar to come out and testify against Tsang and his friends.

In 1989, when Eric Tsang directed and starred in the film “Fatal Vacation”, there were rumours that he made real moves on an actress while acting out a rape scene. When filming wrapped, the female art director denounced Tsang. The scene was deleted from the original film. Twice-married Tsang was also attacked after his “big mouth” offended some triad gang members in 2001. 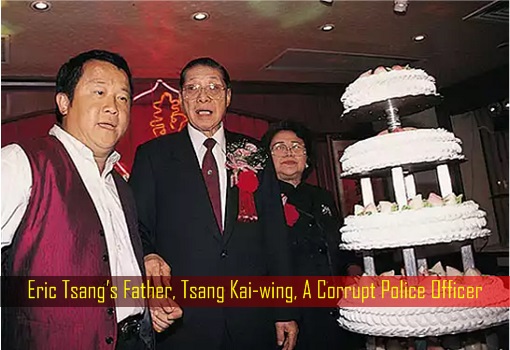 While Tsang might be a notorious sex predator, his father was equally a controversial figure. His father – Tsang Kai-wing – was a well-known member of a gang of corrupt police officers in the 1960s, who died in 2011 aged 94 in Taiwan. A sergeant-major serving the police force from 1940 to 1972, the Tsang senior worked under the legendary “HK$500 Million Sergeant” Lui Lok.

Sergeant Lui Lok earned the nickname for the wealth he earned in bribes received during his time in the force. Lui was the most notorious among four corrupt staff sergeants at the time – the others were Hon Sum, Nan Kong and Ngan Hung. Also known as the “Four Great Sergeants”, they were the de-facto commanders of the officers under British administration.

Eric Tsang’s father was sentenced to 3 years in jail for corruption in 1975 but fled to Taiwan after filing an appeal. The Hong Kong ICAC (Independent Commission Against Corruption) issued a warrant for his arrest on 14th October 1977. In 2001, the Department of Justice seized his house in La Salle Road and later auctioned it for HK$4.35 million after 10 years of civil proceedings. 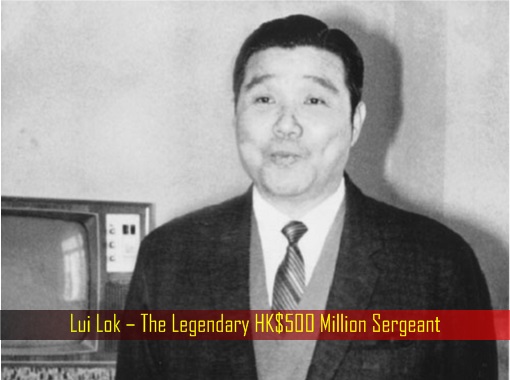 This post first appeared on Finance Twitter, please read the originial post: here
People also like
MRS THATCHER’S DREAM
Pets Clothes Small Dogs Teddy In Autumn And Winter
10 Australian Brands That Are Popular Worldwide
Hong Kong’s First Case Of A Luxury House With A Value Of Over 100 Million Having Serious Quality Problems, While The Government Fails To Act
North Korea says missile tests are practice for ‘tactical nuclear strikes’
MJ Unpacked Returns To Las Vegas For Clio Cannabis Awards, Expert Panels, And CPG Brand Experiences Galore
Over 60? These Are the 5 Best Exercises You Can Possibly Do
Bello No Gallo 2022 Songs & Mixtape
Product-led Growth: The Death of Sales-led Growth