China’s military has been flexing its muscles in the South China Sea with no indication of slowing down. As Trump and Kim were busy engaging in a war of words fits only for kids, the distraction provides a great cover for Chinese to continue its island-building project in the region. After unilaterally opened four new aviation corridors over the Taiwan Strait, Beijing went after the Japanese.

While China is inferior, for now, to the United States in terms of aircraft carrier, it’s a different story under the sea. In terms of number, China possesses 73 submarines while the U.S. owns 75 ships. But against Japan, China could easily maul them. So, when a Chinese Shang-class nuclear attack submarine submerged – with its flag raised – in the backyard of Japan, all hell breaks loose.

Japan Defence Minister Itsunori Onodera said – “We are seriously concerned over acts that unilaterally raise tensions. We’ll keep our guard up to respond swiftly if a similar incident happens. Operating a submerged submarine close to another country’s territory goes against the norms of international rules.” Tokyo has since filed a protest with Beijing. 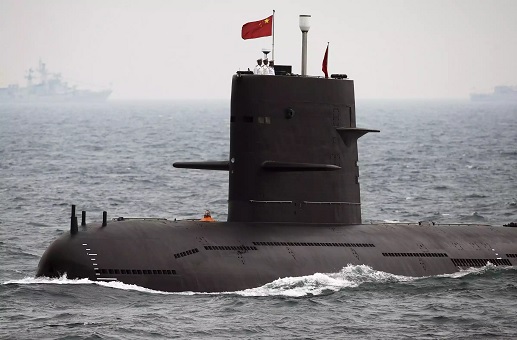 However, the protest will most likely fall on deaf ears as both Japan and China are claiming the territorial waters of Senkaku Islands (recognized as the Diaoyu Islands by China) in the East China Sea. Still, the fact that a Chinese submarine was detected just outside Japanese territorial waters – for the first time – is enough to raise questions about China’s provocative action.

The 110-metre-long Shang-class is a new type of attack submarine – Type 093B – equipped with ship-to-ship missiles that have a maximum firing range of 40 kilometres as well as torpedoes. With capability on par with U.S. Los Angeles-class submarines, the Chinese Type 093B is also capable of vertically launching cruise missiles at land targets and possibly surface vessels.

Because the United States Navy has 36 of Los Angeles-class submarines in commission as of 2017, forming a bulk of the superpower’s boats, the U.S. was extremely concerned about the Shang-class technological and capability advancement. It has been acknowledged that the Chinese Type 093B subs are as quiet, if not quieter, than American Los Angeles-class. 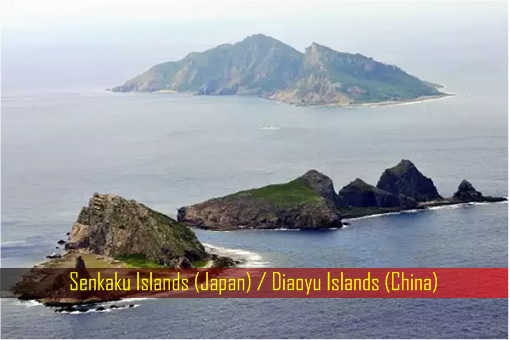 The Japanese Defence Ministry also reportedly claimed that the Chinese submarine, which submerged last Thursday and again on Friday, ignored “repeated warnings” that it was in the contiguous zone. It is, however, not a violation of international law for vessels to enter this type of zone. Japan believed the sail-through was a show of power by China’s military.

Other analysts have suggested that the sub may have been conducting drills for a landing on the Senkaku Islands or collecting information on the area’s topography. It’s unknown wheater the Japanese detected the enemy sub “after” it submerged with its Chinese flag raised, or before that. If it was the former, then Japan could be in deep trouble.

Because the Shang-class sub can be armed with long-range cruise missiles capable of reaching faraway targets on land, it would be too late for Japan if they can’t detect and intercept missiles fired from such vessels. A Defense Ministry source speculated that China may have deployed the submarine to test the Japan Maritime Self-Defense Force’s patrolling capabilities. 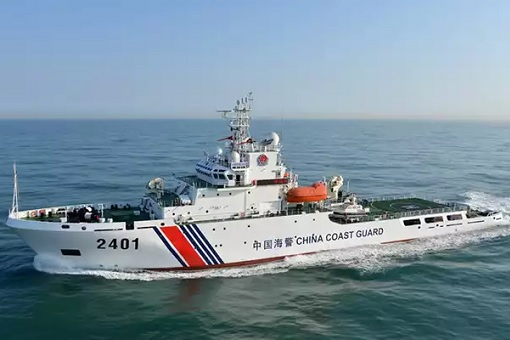 The drama didn’t stop with the sighting of the Chinese nuclear attack submarine. Days later on Monday, three China Coast Guard ships – Haijing 2303, Haijing 2308 and Haijing 2401 – crossed into Japanese territorial waters off the Senkaku Islands in Okinawa at a point north-northwest of Uotsuri – the largest islet in the disputed chain – essentially China’s second intrusion this year since Jan. 7.

At a news conference in Tokyo, Chief Cabinet Secretary Yoshihide Suga called the intrusion “extremely regrettable,” saying the islands are “Japan’s inherent territory legally and historically.” But Chinese Foreign Ministry spokesman Lu Kang said – “The Diaoyu Islands are a natural part of Chinese territory. China’s decision to guard the sovereignty of the Diaoyu territory is unshaken.”

Japan accuses China of caring little about the islands until the oil and gas were discovered. China, on the other hand, claims the islands were part of its territory for centuries until Japan claimed them, and therefore should have been returned to Chinese control after World War II. Taiwan also claims the islands, calling them Tiaoyutai instead. 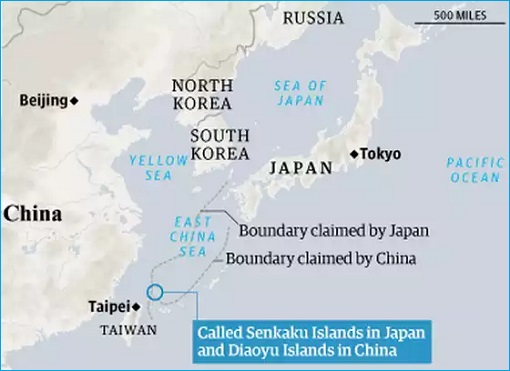 Aside from a 1945 to 1972 period of administration by the United States as part of the Ryukyu Islands, the archipelago has been controlled by Japan since 1895. However, according to the Chinese claims, the islands were known to China since at least 1372 and had been repeatedly referred to as part of Chinese territory since 1534. The islands were later controlled by the Qing dynasty.

The earliest written record of Diaoyutai dates back to 1403 in a Chinese book “Voyage with the Tail Wind.” By 1534, all the major islets of the island group were identified and named in the book “Record of the Imperial Envoy’s Visit to Ryukyu” and were the Ming dynasty’s (16th-century) sea-defence frontier. Interestingly, both China and Taiwan agreed that Japan has no legitimate claims over the islands.

China also argues that Japanese references to these islands did not appear in governmental documents before 1884. Japan took control of the islands in 1895 only after China lost the “First Sino-Japanese War.” Prior to that, they were China’s frontier off-shore defence against “wokou (Japanese pirates)” during the Ming and Qing dynasties (1368–1911).

Now that China is slowly but surely emerging as a military superpower to rival the United States, it makes perfect sense that Chinese Navy unleashes their vessels to reclaim lost territories as well as to restore past dignity. The only thing that is stopping them from snatching back Diaoyu Islands is the United States, a superpower with obligation to defend Japan.