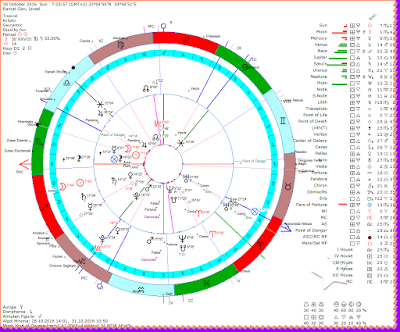 Thanks for following from the former article!

Scorpio.... Is a sign that occupies the 8th house in the wheel. It is a sign of money, sex and rock and roll... well. maybe not the the last one.. Scorpio is a water sign. It is introverse, feminine, revengeful. Everything in the right time, at the right moment... Anything said or done is not forgotten and certainly never forgiven. Remember, in the former article I wrote, during the holidays, we eat apple dipped in honey, to activate one of our senses?? Well, Scorpio is the Queen of senses!! Scorpio can go very low to achieve his/her targets. can offer you money and sex, you name it.. and your services will be weighted.. Did I receive equally for what I paid for?? And the scale should be completely vertical... otherwise... You can never get rid of a Scorpio... Only if he decides so.
Who is a Scorpio? Certainly, people born between october 23- Nov.22nd... when the SUn is in Scorpio, but not only.. If your Sun is in the 8th house, you'll get its attitude. If the Sun conjunct Pluto, too, also, if your ascendant is in Scorpio, and for that one must know the hour of birth... So there are many plain and hidden Scorpios... Only when we check the exact map, we know. and there are other things to look at as well..
Since I write this blog since 2009, You can find 6 other articles under the Sun in Scorpio New Moon.. At the left panel, archive. Maybe I'll link them here.. lots to learn!!
2015;   2014 ;    2013;   2012 ;  2011;  2010;
So let's look at this coming month: The Sun moves 30 degrees, Next New Moon will be at 7 Sag.. mercury moves from Scorpio to Sag... Venus is now conjunct malefic Saturn, will leave it, and slowly join Pluto, for the worst. Mars will leave capricorn, and enter Aquarius- fire in air!! a lot of action here... Jupiter will move just 6 degrees, still in Libra, trying to normalize things.. Saturn moves just 3 degrees,in Sag, and the rest will hardly move. Neptune will be more tight up with the South Node, in Pisces, nothing good can come out of this.. and this is a long lasting marriage.. And last, but not least, ruler of Scorpio, Pluto, is still at 15 degrees, opposition US SUn, bringing its slow but sure demolition. 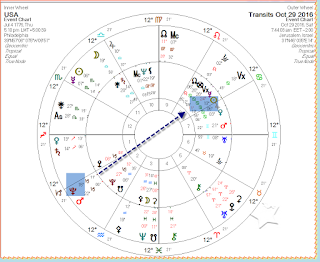 November 3, 2016 Thursday
And the leak was found! markets turn into major shorts.
I think the best picture that we are getting is in the index of Milano: On June 24 if fell sharply by 15.6%! On that day, Jupiter trined Pluto, ( Now it is approaching a square), Saturn squared Neptune ( now it is separating from a square), and Mars 150° Urannus., also Venus was 135° to Mars. The other aspects are gone.

back in June, during Brexit, I wrote, that no matter who wins, the Pound will fall till November. Now it is November, and it is reversing.. SIgn up to the application, to receive these alerts! 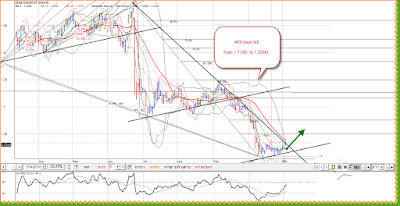 WFC: is firing 5000 workers. The share declines from July 2015. Now at 44, falling next is 38- 37, which will only be 1/3 correction of the 2009-2015 rally. We are short here
On Oct 27th I wrote to watch SDS! SInce then it went up by 5.20%. We are long here, with a stop at 16.
November 2, 2016 Wednesday
Besides the Moon nothing moved. She' entered Sag., and for most of the indices, this meant a further fall. When there are no strong angles in the sky, to support the markets, then, they just find the leak, and fall. The question now is, will they fall below former lows??
November 1, 2016 Tuesday
Tuesday is a day, when cinema tickets are reduced to $2.5 instead of $10- for senior citizens... As of 62 years old, for women... I am not in this category yet... But all my friends are going to 3-4 films on this day...
It's 8 am, I woke up, as usual, at 6:15 today too... we have winter clock now, so it is already light outside, but gets dark very early.
It's Halloween in the US, and my little darling grandson dressed up as  a pirate... Waiting for pictures! it was his first day in kindergarten yesterday, all in English, he couldn't understand a thing... So, his mom stayed with him for half a day. I think it is wise.. until he finds his place. He will be 2 in two days. I missss them ... OK...
Today is also a day, that is ruled by Mars, and Jupiter. There is no news in the sky... I worte yesterday, that this week we are due to a consolidation, so it makes me smile, when I read, that people were waiting for a strong opening, and trade yesterday... One should search answers in the sky..
TA25: 120 minutes chart: I sent alerts that we are short. and we are... 34 days today from the last top- see the symmetry?

Listening to Mozart, click on the link, and listen with me... and uploading some charts, so look here: GILD has earning report today. "Born" on Jan.22, 1992 at 9:30 NY, has a Pisces rising, and a Capricorn stellium. Earnings, is Mars, Ruler of H2, and this is at 9°51 in Cap. Transit Sun AND  Neptune are at 9 degrees! both sextiling Mars. Sun is bad in H8, Neptune is in H12, worse. so I think it will be a negative announcement here. 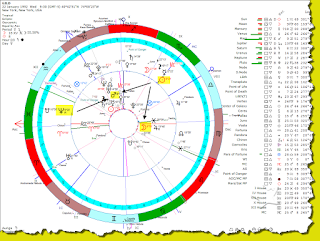 Trade wise it is a short. 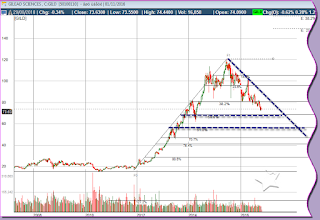 EIX: Also has earning announcements before the opening.. Now this is a strong share, rallying since 2009, by 326%, from $18- to $77. "Born on Jan 2, 1980, 10:00am NY, this chart looks better, but, there is a partnership problem , that will culminate in the next weeks..
Next, transit Moon, before the opening will be in opposition to the Pleiades! bad timing for any announcement. 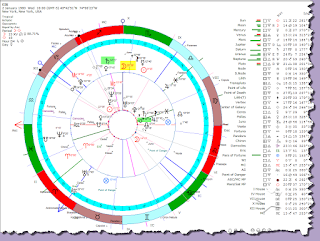 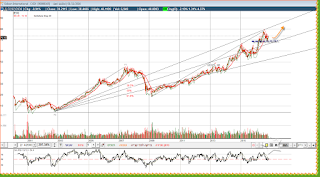 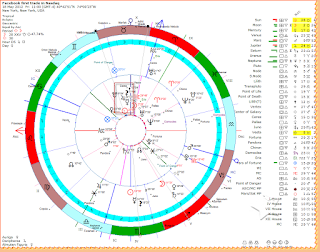 HerbaLife HLF: Could not find the first trade date. In any case, the company exists since 1980, its founder died at the age of 44.. and they are pyramid selling, I think you know what that means.. I never got into it. Nor their products. The share is a in short, with a stop at 69. 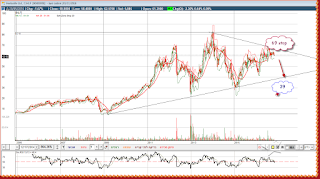 BABA:  Earnings on Nov 2nd. Watch out for a surprise! Uranus is in opposition Mercury.
Listen to more beautiful music! 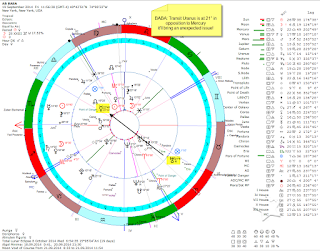 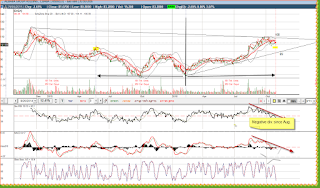 October 31, 2016 Monday
I just uploaded, here above the calendar of November.... My students will know how to read it. I shall relate to these aspects as we get into November.. Note, that I added the angles from planets to malefic fixed stars: Algol and Antares. There are more, much more bad fixed stars, but I don't want to mix you up and make a jungle. There are hundreds of aspects daily, we have to chose the ones that move the markets.
Yesterday we switched to winter clock. It is dark early.. :( 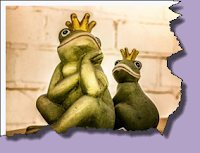 This week the planets are standing and waiting to see how we little creatures down here behave.  In the fundamental world we have the Fed. funds rate, on Nov 2nd,  last unemployment claims, on Nov 3rd... so till then I don't see any harsh steps.
In the planetary world, up there, nothing moves this week, except the Moon. So besides new electoral scandals, that are pouring in by the minute... no news.. LOL...
Comey: I analyzed his chart in July I think... yes, on the 15th, and I wrote , that he has very difficult transit aspects.
TA25: target given yesterday was 1407, closed at 1406.49.
Now, I shall start sending the alerts for different indices... so see you later..
Banks are very important in all the countries. They carry the "burden" of the stock market. If they are weak, or falling, they signal for a whole correction. So I looked at the followings:

I posted GS on FB: here is the update: If you are up to losing 4% and wait to base itself on 170- you are welcome. The technical tools point to a correction. 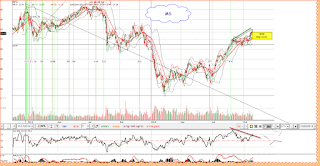 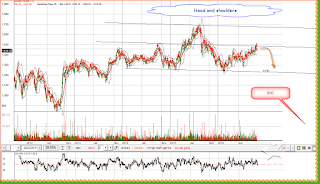 BSESN: last alert was on 10/24; we shorted below 28225. Check out the app for further alerts.
SSMI: The swiss index behaves strangely... While other indices double topped with former tops in April or June 2016, this one lost 23% since Aug 2015: 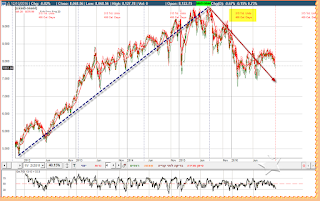 Trump is a Gemini, and before him were only two presidents under this sign: JFK, and George Bush.

Markets: each market with its own data, of course. Since only we have market today, let's see: TA25: topped on July 30, 2015 at 1730, Now it is at 1423... 459 days from the top today, 307 points.. that is 0.66 point per day, if it would be a math calculation, but it is not. It is up to the planets.. What happened on July 30th, that led to a culmination and a fall ever since? Jupiter was square Saturn..  So I should check if this cycle works.. But I cannot, because the index doesn't have a history, it exists only since 1992. We should have at lease 30 years, better 90... when Saturn is involved.
DOW: Like the USA, its Sun is in Cancer... SO Pluto has major effect on it as well.
Others to watch out of this opposition: Ringo Starr, Harrison Ford,Sylvester Stallone, George W.Bush, O.J.SImpson, Camilla Parker Bowles, Cat Stevens, etc.

Another earthquake hit Rome, just 2 minutes ago.. and a strong one too. 6.6 magnitude!.
Follow this guy !!! He is very good
Groups that did well until now: Use this site to pick a winner, if you must trade a share! 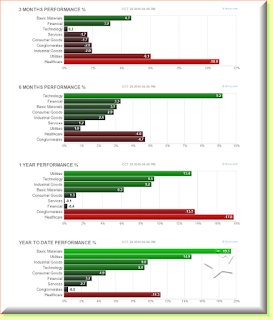 During my trading years, I found that it is better to trade indices, which have high volume, and go somewhere, than to be stuck with a share for ages..

How to Set a Deadline and Achieve You…
Older adults (60plus) lockdown home w…
Empire of Language- Prelude-Metaphors…
Metropolitan Museum’s Emperor’s Carpe…
Can CBD oil be addictive?