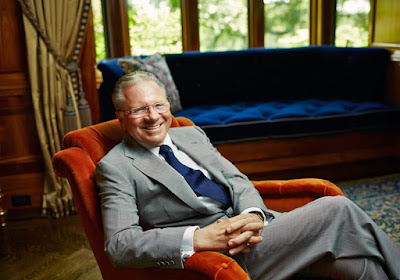 Thomas Peterffy is the chairman of Interactive Brokers, an electronic broker that processes equities, futures and foreign exchange trades. The company is the largest electronic broker by daily average revenue trades. He owns his stake through the IBG Holdings partnership, which controls about 85 percent of the publicly traded company. Peterffy is now worth an estimated $13.9 billion (2017, Forbes)

Outdoor Sofa vs. Outdoor Sectional – …
Why SEO Is The Next Big Thing in the …
30 Cheap & High ROI Home Renovations …
Creating and Selling Digital Products
Telegram Marketing solutions
Birthdate: September 30, 1944
Family: Divorced, 3 children
Born in Budapest during a World War II bombing raid in 1944, Peterffy left his native country in 1965. At the time, he was living under the yoke of the Soviets, who invaded and occupied Hungary after the 1956 uprising in the then-Eastern Bloc country. Seeing little hope, he immigrated to the U.S.
He got a job as a draftsman at a surveying firm. When his firm bought a computer, “nobody knew how to program it, so I volunteered to try,” he says. He caught on quickly and soon had a job as a programmer for a small Wall Street consulting firm, where he built trading models.
Peterffy got his first exposure to Wall Street as a computer consultant with Aranyi Associates, a company owned by another Hungarian immigrant who worked on stock and bond valuation programming. Peterffy also worked at Mocatta Metals, a commodities trader, before deciding to strike out on his own in 1977.
By the late 1970s, Peterffy had saved $200,000 and founded a company that pioneered electronic stock trades, executing them before the exchanges were even digitized.
That year, he bought a seat on the American Stock Exchange to trade options. Within a year, he began working on automating the process, using valuation sheets to improve the odds of profitable bidding on contracts. He founded a market making firm named Timber Hill in 1982, using hand held computers he built to track and calculate trades. He expanded into new markets, including the early Chicago S&P 500 options pits in the late 1980s.
In subsequent years, he expanded into Europe and Asia and, in 1995, opened what is now Interactive Brokers, facilitating trades electronically for individual investors. He and his minority partners sold 10 percent of the partnership that controls Interactive Brokers in a 2007 public offering.
A long-time resident of Greenwich, Connecticut, Peterffy now lives in Palm Beach, Florida.
Milestones
The majority of Peterffy's fortune is derived from his 74.9 percent stake in Interactive Brokers Group, the largest electronic broker by daily average revenue trades, according to the company's website. He owns the shares through his 88.7 percent stake in IBG Holdings, a closely held holding company that controls 2.4 percent of the class A shares and all of the class B shares in Interactive Brokers Group, according to a July 28, 2016 filing to the Securities and Exchange Commission.
The billionaire collected about $1 billion from Interactive Brokers's initial public offering in 2007 and almost $3 billion in dividends, salary and annual payments, according to the prospectus and annual reports and proxy statements since 2007.
He says, “But I believed that in America I could truly reap what I sowed and that the measure of man was his ability and determination to succeed. This was the land of boundless opportunity.”