The busy and congested streets of the Laoag can’t compete with Vigan’s historical core when it comes to aesthetic appeal, but there are a handful of things to do and see in Laoag including one of the country’s best museum. The city also makes an excellent base for exploring the beautiful coast at nearby La Paz and Suba or touring sights associated with former President Ferdinand Marcos. 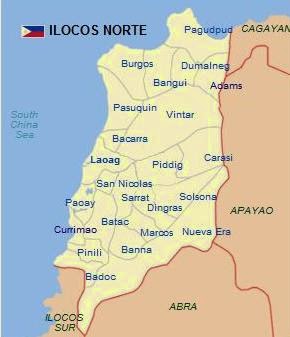 Having critical infrastructure such as the Laoag International Airportat Gabu and the Currimao Port makes Laoag the port of entry of goods and services complemented by an extensive road and highway system that connects it to other cities. With a 12,747.35m total land area, Laoag City provides a large opportunity for economic expansion. The historic scenic tourist spots, availability of internationally competitive accommodations and facilities, and the presence of supportive national government agencies, makes Laoag an ecotourism center, as classified by the Department of Tourism.
As the provincial capital, Laoag is the center of social and economic activity with almost all major commercial and institutional establishments gravitating towards it. The importance of education in socializing its population is shared by both the local government and the private sector, which has invested heavily in the development of the academic infrastructure. The city is home to public and private schools offering elementary, secondary, and tertiary education programs.
Tourism has become a major economic driver of Laoag City, paving the way for new commercial investments and infrastructure development. A recent surge in Chinese and Taiwanese tourists have been flocking to splurge in the city's profitable casino located inside the only 5-star hotel in the northern Philippines, Fort Ilocandia Hotel and Resort. Other places of interest include a tour of heritage sites featuring Spanish colonial buildings, Philippine-baroque churches, white-sand beach resorts of Pagudpud, and Marcos-era mansions. Laoag City has been recently adjudged as the number one tourist destination in Region I and among the top ten in the whole archipelago.
Transportation
Laoag International Airportservices flights to and from Hong Kong and mainland China, as well as, domestic flights by Philippine Airlines and Cebu Pacific. Foreign airlines offer direct charter flights to Laoag as part of travel packages with optional excursions to tourist sites outside of the city. Laoag airport is close to the city, just 10 minutes by jeepney.
Several large bus companies serve Laoag City making connections to major and minor Philippines destinations. These transportation services are provided by GV Florida Transport, Maria de Leon Bus Lines, RCJ Lines, RCJ Trans, Dominion Bus Lines, Partas, Philippine Rabbit, Autobus Lines, Sta. Lucia Express and Farinas Transit Company. Laoag is a 10-14 hour drive from Manila.