After endless back-and-forth negotiations, a variety of snags and snafus, and having to change our closing date not once but TWICE, we are officially home owners! YAY!!!!! 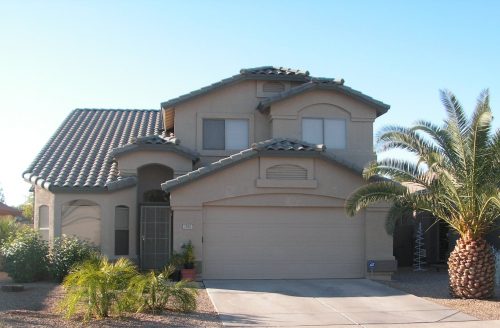 Image source. Note – this is an image that came up in a search of “Arizona houses.” This is NOT our house. As I said before, I won’t be showing a picture of our actual house.

CBD 2020: What to Expect + Our Top Pr…
Expansion of Fed’s Balance Sheet coul…
‘A Pound for a Poo’ in Stratford upon…
Remembrance Day, as Seen Through the …
Four Things Jesus Says About a Discip…

We actually closed about a week ago. It was nice because it was a couple days before our 6th wedding anniversary, so we joked that this year for our anniversary we bought ourselves a house! Lol! Go big or go home, right? : )

Shout out to our families who have been so helpful! My Mom helped us with a portion of our down payment and both of our moms have been here recently (first hubs’ mom came out, then my mom) so they have helped with packing, entertaining the girls, and getting everything ready for the move. Hubs has also done a ton. Funny story – this isn’t the first time that the bulk of moving duties have fallen to him. At least twice before I’ve been gone/out of town during moves. I have left with things in disarray and returned with everything moved into a new space! Ha! This time I wasn’t entirely absent (I haven’t gone out of town), but I’ve been pretty busy with work so hubs has definitely taken the lion’s share of packing and boxing and moving. He started with cleaning and moving pretty much immediately after closing but it didn’t become official (aka: we didn’t sleep in the new house) until this weekend. Now I can’t wait to get out the holiday decorations and go to town! : )

This is random but….does anyone remember this ancient blog post? The post (almost 2 years old at this point) was about the thought of having hubs get a vasectomy. GUESS WHAT’S HAPPENING TOMORROW, Y’ALL!!!!!!!!!! ((insert giant grin here))

Sorry, let me try to contain my excitement (hehehe!)

Poor hubs – he’s not so excited. What a way to be rewarded for all of his hard work in the past week! But I, on the other hand, could not be more thrilled!!! We’ve known that we are done having kids for awhile, but having the little snip-snip is the last thing to make it really super-duper official and I can’t wait! I’m taking off early tomorrow so I can drive him to the appointment, as he’s got a prescription sedative to help him relax and he’s not supposed to drive on it (for a man whose usually cool as a cucumber, he’s pretty anxious over the whole thing). Then back to business as usual.

I’m really looking forward to the end of the semester! I feel like such good things are on the horizon – new house, hubs starting back to school, a new year, etc. It just feels like a fresh start or a re-set of some sort. Not that this year has been bad (in fact, there’s been a lot of good), but I did call summer 2016 the summer of death and I’m excited to see what new adventures lie ahead for us as a family.

On the financial front – I may have lied. I said I was going to refinance my Student Loans THE SECOND that the house deal went through. But now that I’ve been thinking about it, I’m not so sure. I still have 9 months left of interest-forgiveness for my subsidized student loans (through IBR), so now I’m thinking I might only consolidate the unsubsidized loans and leave the subsidized ones for the time being so I can get all 9-months worth of interest-forgiveness before I throw them into the consolidation? However, I have issues with Navient every time I turn around, so I’d love to rid them from my life. In the end, I think I’ll do nothing this month. Over the winter break I’ll start my investigation into student loan consolidations/interest rates/etc. and probably make a more concrete decision before the end of the year (because that will greatly impact our financial goals for 2017).

Anywho, I gotta jump back into work! I hope your Mondays are off to a good start (look at me actually blogging on a Monday – pat on my back) ; )