What to do if you get a winding-up petition?

What is a winding-up petition?

A winding-up petition (WUP) is a legal notice issued to an insolvent company, which risks the assets of that company to be liquidated by an appointed official receiver (OR) if the firm was unable to pay a debt of more than £750 during a period of at least 21 days. The notice is issued after HMRC or the creditor (your company owes) submits a winding-up petition to the court.

Statue of Tony Bird Mooted
Ripple Price Analysis: The Bull and B…
What are you telling me and why shoul…
4 Awesome Furniture Brands To Shop At…
Review: This Green and Pleasant Land …

Keep this in mind that a winding-up petition (WUP)  differs from a winding-up order (WUO), the former is the first stage of the process whilst the latter is the last stage.

What is the least you can do when your firm receives a WUP?

We would recommend you to consult key features of insolvency law which are applicable if your company is registered under the Companies Act (2006). You’ll at least know what to do and what not to do if a winding-up petition shows up to your firm rather than getting worried about it. Facing a winding-up petition can become very frustrating for the owners, so it is advised that you consult specialists and advisors to know what to do in this situation and how to avoid landing yourself in a further mess. Your first point of contact should be your accountants who will be in the best position to guide you, or your business lawyers if you have one in place already.

What happens after the WUP shows up to your firm?

After the winding-up notice is issued, the London Gazette will publish an advertisement just to let the creditors know about it. Your company account freezes soon after the advertisement and it requires a validation order from the court to unfreeze your firm’s accounts. Whilst the procedure itself is very costly, it doesn’t guarantee any success in restoring your company accounts. You normally receive a statutory demand before a winding-up notice is sent, make sure you clear your debt as soon as you receive a statutory demand to avoid receiving a winding-up notice. If you do not have any liquid cash speak to your accountant or your accounts manager in your accounting firm to find out a suitable method to get access to finance quickly.

How are your transactions affected?

Transactions of your company’s bank account after the issuance of a winding-up petition may be recorded and vulnerable to regulation by the official receivers (OR) and liquidators, this can be used against you in order to pay the money back to the company.

Even if you plan to sell the assets of the company, official receivers (ORs) or liquidators may reject the tender and reverse the process after careful evaluation, if assets are proved to be undervalued or sold to an associated party.

Is your ‘post-petition disposition’ legally considerable?

‘Post petition disposition’ that is the disposition of company assets made after the issuance of a winding-up petition, is considered as null or void according to Section 127 of the Insolvency Act.

A company may resume its business operations after the notice has been issued but your authority diminishes as the liquidators can control any payment you make to the vendors.

Does the court allow you to claim any defence after the WUP is issued to the company?

There is a misunderstanding that directors of the company to whom the notice has been issued can claim full defence on the debt by highlighting them as flawed or disputed on the day of hearing at court. The court may decide to reject your appeal as it was filed late and simply issue you a winding-up notice.

It is important that you remember that you are not allowed to discuss problems regarding the winding-up petition on the day of hearing at court, so it is advisable that you should resolve issues in hand way before.

What other options are you left with?

You have other options to consider once you have been presented a winding-up petition like you may request the petitioner to halt the petition for some time period whilst you are willing to cover the costs of the process. You can not expect the petitioner to agree with your demand if your company is already unable to pay off debts unless your company is willingly up for voluntary liquidation or formally requests the creditors for repayment under a Company Voluntary Arrangement (CVA).

You may also acquire an Administration Order, which allows officially licensed practitioners to manage your company and gives them the authority to evaluate and sell the assets of your company. During this process, your firm will get immunity from legal orders and there will be a halt in the winding-up order against your firm that is to be issued by the court.

Your accountant is your adviser, speak to them and make sure that you have discussed all potentials options with them before proceeding with making a decision.

You need to keep your calm!

A number of options will be available to you during the initial meetings with the petitioner but once the notice gets issued, things become much more complicated. Therefore, it is preferable to consult an expert on this matter along with conducting personal research on the legislation that relates to the issue. 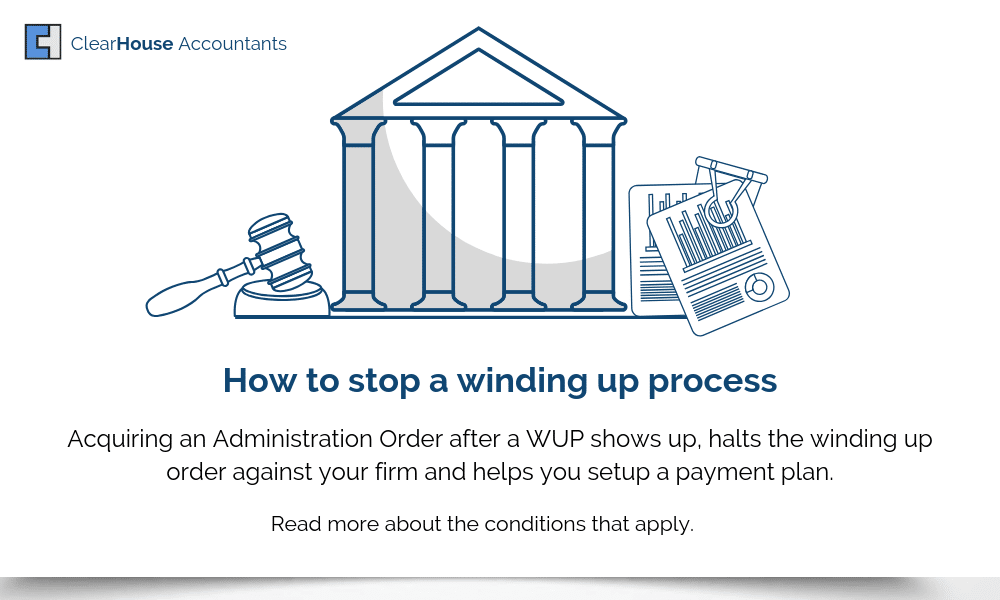 How to avoid getting WUP’s?

Clear House Accountants are specialist Accountants in London who have years of experience working with SME’s, helping them manage their compliance, grow their business and helping them with problems they encounter by guiding them or putting them in touch with connections within their network who can help them.

Government Grants – What You Need To Know

The post What to do if you get a winding-up petition? appeared first on Clear House Accountants.

How To Use Bankruptcy Laws Efficiently?

Attempts at Consolidating Vote Bank Ahead of Upcoming Elections

WTF? is up with Upskirting

What to do if you get a winding-up petition?