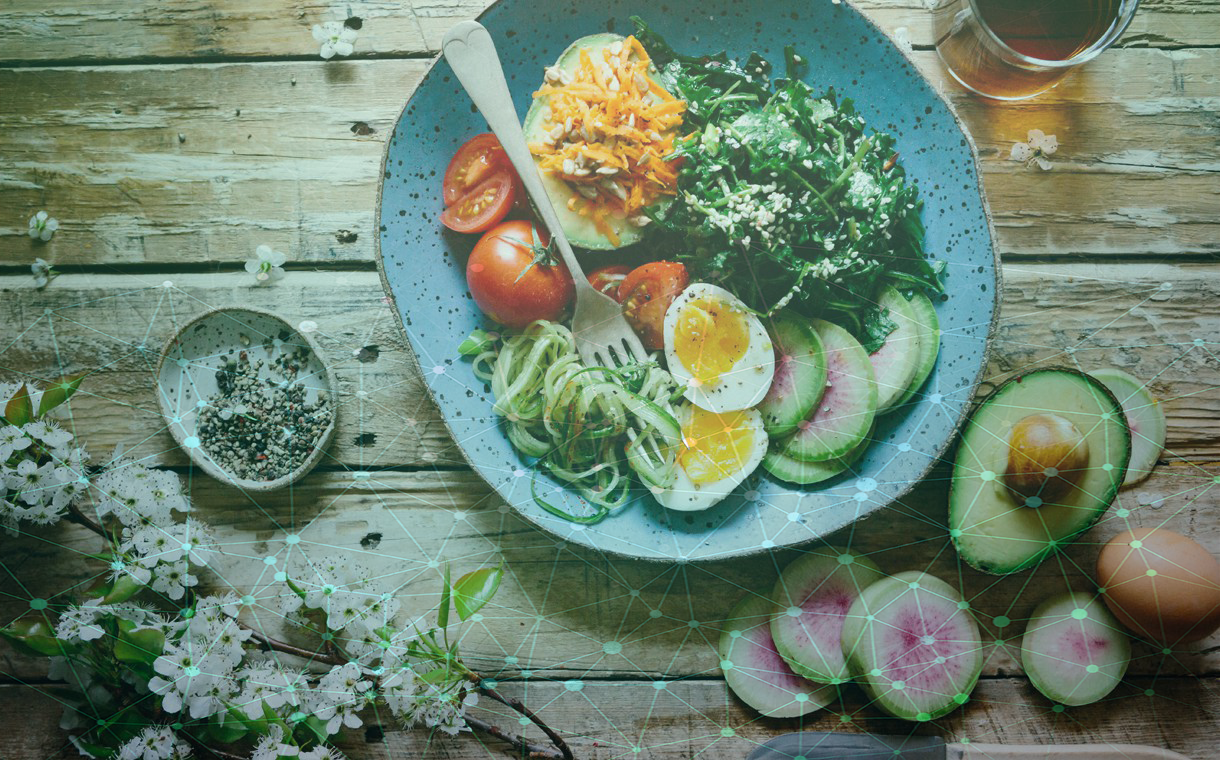 More Data empowerment for Customer and tracking illness of food: There are two main problems have come out. Last year in a research study conducted by the U.S. based Food Marketing Institution (FMI). They found in the study that now the people are becoming more health-conscious and they are concern about the quality and information of the food. They want transparency in the system.

The report stated that 75% of the users wanted to switch to the brands or company who provide more details about the food items on their labels. Later in 2016, in the same study, only 39% of the people stated that they would change the brand concerning with the label details of the food. And blockchain can solve this issue because of its features such as easy accessibility, fixed distributed ledger by design, and it can provide details of the products to the customer easily. The Chief Marketing Officer at blockchain-based farm-to-table food traceability company Te-Food, Matron Ven said,

“Food companies implement traceability because they see that the consumers require transparency and credibility. Blockchain’s immutability helps them to prove that the information the different supply chain companies provide is uncorrupted.”

This food traceability is not only issues raised by the customers, but the main purpose of the industry at the big scale to know and investigate about the illness because of the food products and that should be stopped at any cost from endangering any human life. Another San-Francisco based blockchain startup, Ripe.io is functioning with the food supply chain. The Chief Operating Officer at Ripe.io, Rachel Gabato said,

In the year 2017, a critical Salmonella outbreak was brought under the investigation by the U.S. Food and Drug Administration (FDA) which was earlier linked with the imported papayas from a Mexican farm. Then late to know the actual cause of the disease, the agency conducted more a hundred interviews and research studies on various mango samples in the lab environments. And with the help of the blockchain, we can easily decrease the procedure of locating the responsible cause and the corrupt harvester can be easily tracked.

The food industry has a long chain of participants such as farmers, vendors, retailers, and shopper, etc.- to keep track of everything is complicated. This every idea generated the encouragement in the suppliers and retailers to know the data straightway. The research associate at Henley Business School said,

“A key benefit not discussed is the fact that data needs to be cleansed, structured and verified before it goes onto a Blockchain. This is one of the key benefits and in the use cases I have examined closely, 75% of the effort was in fixing the data.”

IBM’s domination in the blockchain providing solution: IBM’s Food Trust is dominating the industry of blockchain tracking solution and it is based on the Hyperledger Fabric blockchain protocol. With providing the first product tracking solution to Walmart China in December 2016. They are getting big clients such as Nestle, Dole Food, Carrefour, Kroger, and Unilever. The stage officially went live on in October 2018. As the IBM “millions of individual food products” were traced by retailers with the help of Food Trust blockchain.

IBM has also signed Albertsons Companies, another main food, and drug retailer in the U.S. They will use it first to trace the supply chain for romaine lettuce and then on the other products. Recently, the news came out that the U.S. seafood trade association National Fisheries Institute (NFI) is also working along with IBM and using Food Trust to track seafood. This is first of its kind and now it’s joined by other companies. A few months ago North America’s biggest self-stable brand of seafood branch, Bumble Bee Foods has introduced a blockchain stage for tracing their seafood alliancing with SAP, a German tech company.

Earlier for expanding the reach of Food Trust members, IBM blockchain has done a partnership with Nestle in April, and France based retail company Carrefour. The Carrefour is tracking the chain of Mousseline. They provided the customer to scan QR and know the details regarding the product.

New tools will emerge based on blockchain traceability: As the market technology ever since developing, Carrefour has launched its own blockchain solution for tracking their milk, named as Carrefour Quality Line (CQL). CQL promises the users to have total traceability for the whole supply chain. The user will even get the GPS coordinates of the producer farmer of the milk. Another project initiative related to blockchain technology is the U.S. National Pork Board alliancing with Ripe.io to examine the supply chains of pork.

The Representative of the company stated,

“The ripe.io platform will enable the NPB ecosystem of pork producers to monitor, evaluate and continuously improve their sustainability practices based on six defined ethical principles guiding the U.S. pork industry. These principles provide industry standards in food safety and public health, animal well-being, protecting the environment, and improving the quality of life for the industry’s people and communities.”

More of this, in the starting of 2019, World Wildlife Fund-Australia and Global Corporate Venture BCG Digital Ventures together introduced a blockchain-based supply chain tool named as OpenSC. It provides the facility to track their producing products. In July, Nestle also joined OpenSc for tracing milk from farms and producers in New Zealand for supplying it in the firms in the middle east.

Blockchain is different niches: Alcohol and Coffee: The popularity of the blockchain is increasing in beverage and alcohol industry. The news came out in March that the premium Scotch Whisky brand Ailsa Bay will be introducing the world’s first tracing scotch whiskey with the blockchain-powered system. The U.K.’s auditing firm E&Y also declared that they will bring blockchain solution across Asian countries to know the quality and authenticity of imported European Wines.

Starbucks’s “bean to cup” initiative is that the company will implement the I.T. giant Microsoft’s blockchain service Azure to trace the production of its coffee and coffee provided to them allegedly from the farmers of Rwanda, Colombia and Costa Rica with more economic independence.

Co-signing the technology by China’s food industry: Chinese food and beverage industry which held the record high of 4.27 trillion yuan ($620 billion) in revenue last year are now also showing interest in blockchain. The official newspaper of the Chinese Communist Party has reported in January that their Food and Drug Administration Chinese Chongqing Yuzhong District is going to implement blockchain to make the supervision of food and drug quality strong and assured with tracing the life-cycle of products.

Walmart China has also collaborated with VeChain’s Thor blockchain. Like the press release, the Walmart China blockchain traceability platform (WCBTP) will be an alliance venture by the VeChain, PwC, Walmart China, Inner Mongolia Kerchin and the China Chain-Store and Franchise Association.

Presently the Walmart China has traced the supplies of 23 products and soon will release another 100 products. On the other hand, their neighbour Vietnam, there the Te-Food has currently implemented blockchain-powered traceability at Vinamilk, one of the biggest dairy companies in the Southeast Asian countries.

Most of the companies are tracking their food for their safety. Earlier in April, Swiss food technology company Buhler has launched two blockchain-ready products: Laatu, a tool targeting to decrease microbial contamination in dry goods, and Tubex Pro, a scaling system that self-optimizes and produces a continues flow of the produced data. The Bulher tools are connected with the Internet of Things(IoT) service, which hosted by Azure cloud platform of Microsoft.

As per the information of the company Laatu can destroy over 99.999% of salmonella and maintain the nutritional quality of food. Also, Iota Foundation has teamed up with the digital food safety management firm Priority in the month of June. It also enables the user to check the different variety of foods for allergens. And it also provides the customer with the detail of food products by scanning the barcode on the app.

Possible problems: The food industry is adopting blockchain technology but it has limitations too. The data entered into blockchain systems by the supplier is not guaranteed to be sure, but the technology ensures the prevention of the tampering or entering of false in the last stages. In most cases, it is difficult to collect and digitize the date because of numerous different setups utilized by suppliers, Ripe.io’s Gabor says,

“As we have engaged with the farmers in the food areas of dairy, meat, produce, citrus, commodities, a primary challenge is the access and availability of data. Farmers capture data in many different forms and the ability to digitize this data for capture and sharing has been our primary challenge.”

“The main challenges of implementations are not blockchain-related, ” assured Marton Ven from Te-Food. He further said,

“The hardest obstacle comes from collecting data from a large number of different companies. In recent decades, supply chains have become global, sometimes incorporating hundreds of companies from different countries, with different technological maturity, using different identification methodologies. Keeping the data integrity – which is the backbone of traceability – requires all of them to actively cooperate on what data to collect, how to capture the data, and how to compile the information into meaningful product data, which the consumers can read.”

As per Keogh, there is another problem that needs the attention that if blockchain becomes compliant with the present GS1 standards. The food industry mainly depends upon them to format their data for communications sharing across supply chains before the blockchain technology.

As an academic’s view, the blockchain is like a record-keeping solution and not traceability. The state of supply chains in the food industry will immensely depend on how these blockchain-based solutions are implemented:

“WalMarts’ strategy with a single platform from IBM Food Trust is an example of both progress and a hurdle at the same time. […] I would have preferred to see WalMart providing a blockchain-enabled, standards-based platform and then their hundreds of suppliers who will use dozens of Blockchain solutions being able to connect and share a vendor lock-in is counterintuitive in the evolving Blockchain world.”

Ven agreed, “As traceability throughout food supply chains barely exists worldwide, blockchain has a good chance to become the de facto standard technology for it.” He further added, “But to provide global solution, other standards have to be applied as well, like GS1 standards for identification and event structure.”

Therefore, more and more suppliers and retailers are joining with blockchain companies or firms. The experts were stressing about the blockchain adoption inside the field, but it is not much about concluding out the technology as the shortage of proper data analysis in the first place. Ven told,

“We haven’t ever met any food company which refused to use blockchain. Although solution providers have to put in a lot of education effort, food companies are open to the idea of using blockchain. Certainly, the media hype around blockchain helps this effort, but 90% of the implementation challenges are not blockchain-related ones.”