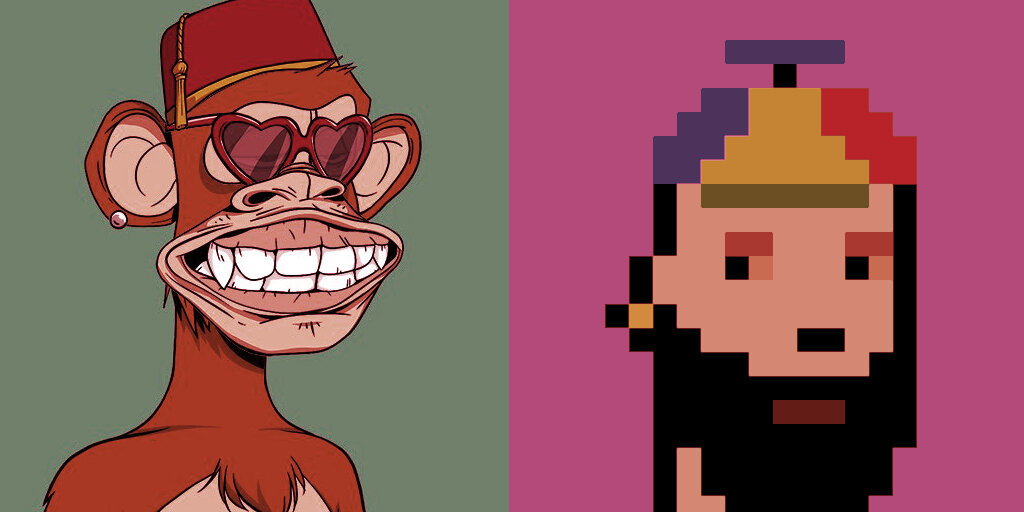 NFTs are seeing a ferocious resurgence.

After generating over $2.5 billion in sales in the first half of 2021, sales volume for these blockchain-based digital deeds of ownership dropped off a cliff amid growing criticism of the environmental impact of Ethereum, the blockchain network where most of this action is taking place (and criticism that it was all a bubble).

Fast forward to the last few weeks, and NFTs are well and truly back, with a plethora of new projects and trends grabbing headlines. Here are the hottest trends in the NFT industry that are fueling discussion around crypto’s newest subculture—and shifting millions of dollars’ worth of capital.

1. Membership in a club: Bored Apes

NFT enthusiasts might point to CryptoPunks as the marquee NFT brand. But fashion is nothing if not fickle, and earlier this month, a new contender to the NFT crown emerged. The NFT world has gone gaga for Bored Ape Yacht Club, a series of NFTs depicting apes (bored ones) in various facial expressions.

They're selling for serious cash too: a single Bored Ape NFT sold for $2.25 million worth of ETH this week, with the collection shifting more than $400 million of total volume to date, per CryptoSlam. A lot of more than 100 Bored Ape NFTs are currently up for auction at Sotheby's, with an estimated haul of up to $18 million once it's all said and done.

Ape owners make their ape their Twitter profile, so it’s a status symbol, but they also get a bunch of perks with their ownership: access to a Discord chat for other owners (including the likes of NBA star Steph Curry); access to owner-only merchandise drops (like from hot streetwear brand The Hundreds); and free additional NFTs from BAYC, like Mutant Apes and Bored Ape Kennel Club.

The NFT Avatar Trend Is About Community

In short, NFTs represent—for some—a unique moment in history and culture. If Visa is right (scroll down), and NFTs truly are next in a line of “historic commerce artifacts,” it’s no surprise that these digital images are reigniting interest.

If you’re an NFT skeptic shaking your head at the idea of ape and penguin pictures selling for thousands of dollars, look away now.

EtherRocks is a series of 100 NFTs depicting images of rocks taken from royalty-free clip art. Apart from differences in color, they’re all the same. Yet these pictures of cartoon rocks—yes, rocks—were selling for over $100,000 in early August. By the end of the month, they were trading hands for millions of dollars.

EtherRocks’ claim to fame is twofold. First, these NFTs were inspired by the classic Pet Rock toy craze that was prevalent during the 1970s. Secondly, they have a venerable vintage, as NFTs go, being among the first non-fungible tokens created back in 2017—and with only 100 available, they’ve become hot property among NFT collectors.

CryptoPunks are still the gold standard in NFT ownership (for now) for the same reason: their age. Punks have been around since 2017 and have retained their value. They are “ancient” by NFT standards.

And just like with Bored Apes, a Punk as your Twitter avatar is a status symbol, to the point where Punk owners can even rent out their avatars to others for “social signaling.”

During the last wave of NFT mania, companies took to throwing together branded artwork depicting toilet rolls or tacos and minting them as NFTs.

But in the second NFT boom, brands are doing something slightly different, and considerably more interesting: they’re buying existing NFTs, rather than making their own (that most people don’t want).

Last week, Visa announced the purchase of a CryptoPunk NFT for 50 ETH (about $165,000) with a view to adding it to its collection of “historic commerce artifacts.”

“Today, as we enter a new era of NFT-commerce, Visa welcomes CryptoPunk #7610 to our collection,” Visa tweeted on August 23.

Cuy Sheffield, head of crypto at Visa, is extremely bullish on NFTs and believes they are here to stay. “NFTs are gaining momentum as digital-first sports memorabilia,” he said in a prepared statement, adding that Visa expects a “huge range of new cases in the years ahead.”

Visa isn’t the only household brand to buy into NFTs lately.

Budweiser also bought an NFT of its own last week. The beer giant changed its Twitter profile picture to a sketched beer rocket NFT that it bought for $26,000, about 8 ETH at the time.

The NFT itself was part of the Rocket Factory NFT series, designed by an artist named Tom Sachs.

Things didn’t go quite as smoothly for Budweiser as they did for Visa: blockchains are extremely public, and once a wallet is identified as belonging to a particular individual (or brand) it’s open to all. Budweiser found its Ethereum wallet inundated with weird and wonderful collectibles, including a doodle called “Minimalistic Cock.”

Fractionalized NFTs have been around for a few months, but they’ve shot to prominence in recent days.

While crypto billionaires are gleefully snapping up Bored Apes and CryptoPunks, those six-and-seven-figure NFTs are way out of the average crypto user’s price range. But unlike with traditional artworks, it’s possible to fractionalize an NFT, breaking it up into multiple (cheaper) parts that can be bought by the less well-off.

Many crypto users are now clubbing together in decentralized autonomous organizations (DAO) that specialize in buying up NFTs, in order to gain exposure to this new asset class. (They’ve even fractionalized the original Doge meme that inspired Dogecoin.)

"Fractionalization enables more people to have a piece of the investment pie. However, companies offering fractional NFTs to any investor may not have realised the regulatory implications of doing so,” said Philipp Pieper, co-founder of Swarm Markets in a statement shared with Decrypt.

No “hottest NFT trends” would be complete without mentioning gaming NFTs, a subculture of a subculture that’s turning plenty of heads in crypto.

The Ethereum-based Axie Infinity has quickly become the most prominent and successful crypto game, racking up more than $1.6 billion of NFT transaction volume since June—more than any other single NFT collection or project. It’s a monster-battling game in which the creatures themselves are NFTs, and they’re required to even play the game. Players then earn crypto token rewards, which can be enough to fuel a living wage in some countries.

Even with a total minimum buy-in cost of several hundred dollars’ worth of ETH, that hasn’t stopped the game from surging: it now has more than one million daily active users. No other crypto game comes close to matching Axie’s recent momentum, although NFT-driven fantasy soccer game Sorare has an avid fan base and the upcoming 3D metaverse game The Sandbox has a lot of potential and prominent partners/investors.

Elsewhere in the NFT-gaming world, Dom Hofmann, co-creator of video platform Vine, is spearheading Supdrive, a video game NFT project that involves making each available NFT a playable video game—an “on-chain fantasy console,” if you will.

Believe it or not, a blockchain can not only host the token representing a deed of ownership for a piece of artwork, but actually create the artwork itself.

That’s the premise of the burgeoning generative artwork NFT market, in which a script or algorithm stored on a blockchain produces original, one-of-a-kind artwork during the minting process. Art Blocks is by far the biggest player in the space.

The Ethereum-based initiative encompasses a wide array of individual drops by various artists, spanning a diverse swath of artwork styles and approaches—and nearly all of it is surging lately. Art Blocks saw $583 million worth of trading volume in August alone as collectors created a feeding frenzy around new drops and paid top dollar for secondary market pieces.

What Is Art Blocks and Why Are These NFTs Suddenly Selling for Millions in Ethereum?

A single Art Blocks NFT from Dmitri Cherniak’s Ringers collection sold for $5.66 million worth of ETH in late August to Starry Night Capital, a new NFT-centric investment fund started by Three Arrows Capital. Earlier that same week, a piece from Tyler Hobbs’ Fidenza project went for $3.3 million worth of ETH.

Here’s a trend that is currently spearheaded by a single project, but it has already had an enormous impact—and could prove to be very influential going forward.

Loot is an NFT-driven project from the aforementioned Dom Hofmann, and at its core, it’s just a series of lists of fictional fantasy-world weapons and equipment. That’s it. There’s no artwork or direction, and no company or creative force dictating their usage. But that’s intentional.

What is Loot? The Surging Ethereum NFT Role-Playing Phenonemon

Hofmann released these lists into the world (for free) as a prompt in late August, and the community has already responded by developing a wide array of tools, derivative projects, guilds, and other initiatives to flesh out something more. Will it eventually be something akin to a fully-fledged fantasy game? A decentralized intellectual property?

It’s too early to tell—it’s literally been one week, as of this writing. But the crypto community is buzzing around the possibilities, plus the Loot NFT lists are massively in demand: one sold for $954,000 worth of ETH, and there’s already been $159 million worth of trading volume for the set of 8,000 NFTs. What comes next is up to the collective imagination of the community.


This post first appeared on Passive Income With NFTs, please read the originial post: here
People also like
10 Attractive Circle Beard Styles & How to Get Them
NFTs: The Next Big thing for Businesses
How Real Estate Companies Are Growing With Blockchain Technology?
Karen S. Wiesner, Tension and Twists, Part 1 (Writer's Craft Article)
How To Make A DIY Nature Mandala Craft
Time, Technology and Your Tiredness
A Furry’s Guide to Cryptocurrency
The Dreaded Long-Winded Interviewee