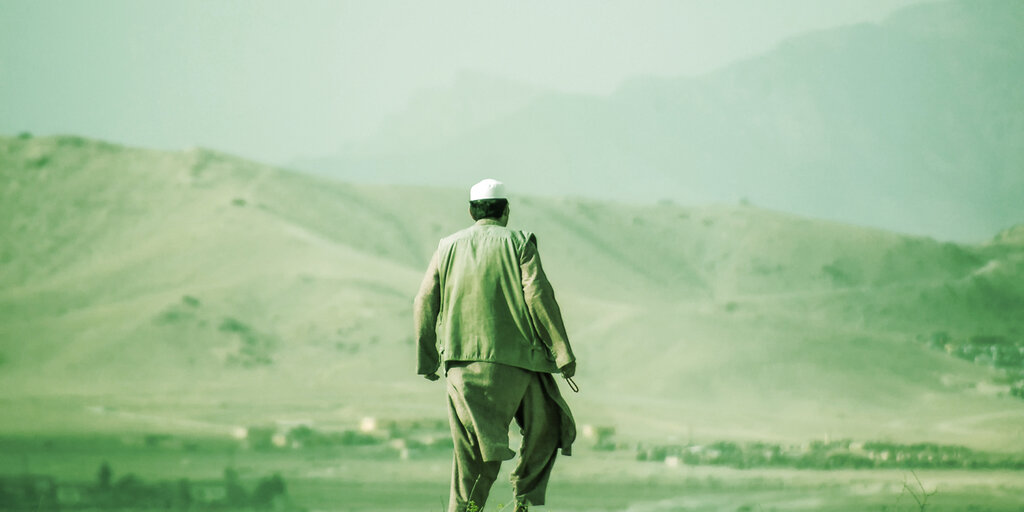 When interpreting the world, some people apply religious beliefs. Others view it through the confines of a political party or family upbringing.

Some people only have one filter through which they view the world: Bitcoin.

And at least a few have taken to Twitter to share their worldview with regards to the unfolding political situation in Afghanistan, a country that repeatedly repelled invaders well before the U.S. intervened in 2001—and one which will continue to beguile people now that the Taliban has taken advantage of the U.S. withdrawal to assert control.

Max Keiser, a self-proclaimed Bitcoin maximalist who hosts the Orange Pill podcast after years of shilling BTC on the Moscow-run RT network, started things off by sharing a video of Afghans running alongside—and even hanging onto—a U.S. Air Force plane as it evacuated. (Some then fell to their death.) Keiser's caption? "Nocoiners after #Bitcoin crosses $100,000."

Though Keiser had some defenders, most took Keiser to task, calling the post tasteless and crude.

Fellow Bitcoin podcaster Stephen Livera shared another BTC talking point from today, writing, "Under a Bitcoin standard, USA would not have sent troops to Afghanistan."

Bitcoin was created in 2008, just seven years too late for the U.S. to adopt it and rethink its military strategy. But had it been available, the military surely could have afforded to buy some BTC and put in an order for rocket launchers on the dark web.

Under a Bitcoin standard, USA would not have sent troops to Afghanistan https://t.co/hLDG8ChneD

"Bitcoin is Saving," an anonymous account with a healthy 184,000 followers, proclaimed: "Afghanistan's best hope is now #bitcoin. It always was, but now everyone understands. Same goes for the rest of the world."

Afghanistan's best hope is now #bitcoin. It always was, but now everyone understands. Same goes for the rest of the world.

No, not everyone understands. In fact, most Afghans have never even heard of Bitcoin because more than half of Afghan adults are illiterate—a consequence of ongoing lack of access to safe education thanks to groups such as the Taliban.

In which case, there's Ethereum, wrote ptoner.ETH, in a well-intentioned way:

If Afghanistan's infrastructure was built on Ethereum there would be very little for the Taliban to seize as they roll back into town.

The banks would still work. Decisions could still be made via DAOs that involve the outside world. It wouldn't stop working for even a second.

It's true. Little-known fact: The Kabul airport is still running because it's built on Ethereum.

Never mind Ethereum, said @Trader4lyf, who claims to be a Wharton MBA and former investment banker. He explained the practicality of Bitcoin in a since-deleted tweet: "Imagine trying to flee Afghanistan and all you have are heavy gold bars. You either climb without the bars or get left behind. And most likely you won't get past the metal detectors. #Bitcoin fixes this."

Or, imagine leaving your home with the clothes on your back, fleeing a regime known for draconian punishments and the brutal suppression of women's freedoms. And not only that, but trying to come to a country where people are free to spout whatever nonsense they want—and frequently do!

Just, maybe, when they arrive, treat the Bitcoin talk like a bank would treat a deposit: Put a hold on it.

Should the ends justify the means wit…
Top 3 Shaving Cream Warmers (Dispense…
E-Win – Tax Refund Sale: Up to 20% OF…
Those Nasty Mosquitoes: Organic Ways …
The A500 Mini Review


This post first appeared on Passive Income With NFTs, please read the originial post: here
People also like
Should the ends justify the means with Donald Trump?
Top 3 Shaving Cream Warmers (Dispensers): Expert Review
E-Win – Tax Refund Sale: Up to 20% OFF
Those Nasty Mosquitoes: Organic Ways to Keep them at Bay
The A500 Mini Review
Statement from the Office of U.S. Agriculture Secretary Tom Vilsack