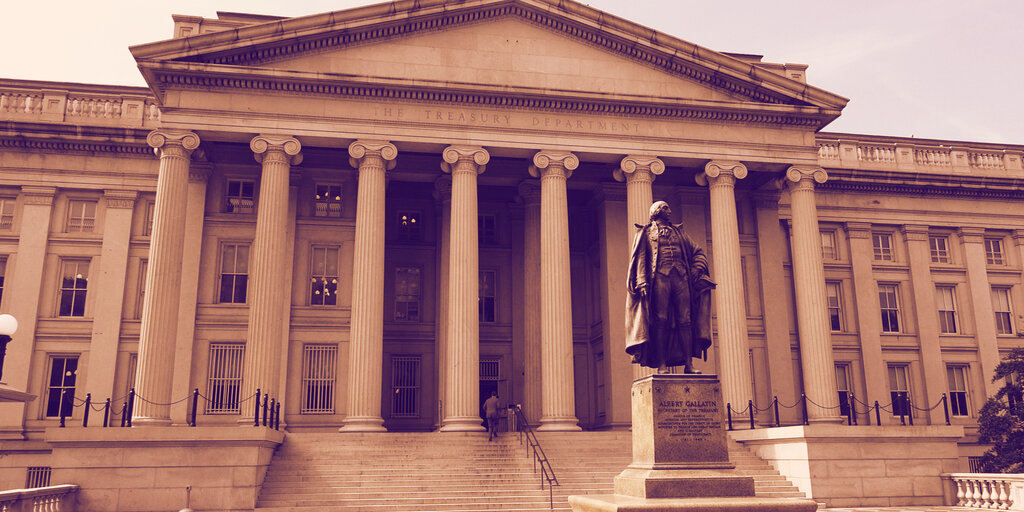 If the recently passed Senate infrastructure bill is signed into law, it will legally change the definition of a broker for tax purposes to just about anyone who handles Crypto assets.

That doesn't mean U.S. regulators will interpret it that way.

The Treasury Department, which oversees the Internal Revenue Service and the Financial Crimes Enforcement Network among other bureaus, is gearing up to offer guidance that won't require third parties who aren't actually asset brokers to follow new crypto Tax Reporting Rules, according to a report Friday from Bloomberg citing an unnamed official.

The cryptocurrency world was thrown into a tizzy late last month when a $1 trillion infrastructure package being considered in the Senate included a provision defining "any person...who is responsible for and regularly provides and services effectuating transfers of digital assets" as a broker, thereby requiring them to file 1099 forms with the IRS on behalf of customers.

Industry lobbyists argued that the tax reporting requirement could, if read broadly, require miners and validators to file tax forms on behalf of those whose transactions they were validating, not to mention crypto protocol developers and wallet providers. Groups such as the Blockchain Association and Coin Center pointed out that this tax information would be all but impossible to obtain and could put a chill on the industry.

Over the next week, crypto advocates worked with lawmakers to amend the bill, but those efforts were ultimately fruitless when a last-ditch effort to explicitly exempt miners, validators, and others from the reporting requirement was blocked by Senator Richard Shelby of Alabama.

The bill is now headed to the House, where Speaker Nancy Pelosi says it won't receive a vote until Senate Democrats muster the 50 votes needed to pass a separate $3.5 trillion spending bill. Changes to the bill in the House, though possible, are far from assured.

Today's Bloomberg report, which cited an anonymous official, matches up with reporting from Politico's Victoria Guida. The administration, said Guida, "say the notion that they’d apply third-party tax reporting rules to entities like miners that aren’t actually brokers is silly."

A quick little thread on the admin’s stance on the crypto tax fight, based on a convo I had with an official this week. First of all, they say the notion that they’d apply third-party tax reporting rules to entities like miners that aren’t actually brokers is silly. 1/x

The provision instead had other purposes from the administration's point of view, according to Guida’s source. For starters, it gave the IRS more authority over cryptocurrency taxation. Additionally, the broad language within the bill also gives the Treasury leeway to regulate the technology as it changes; the exclusions in the failed amendments might have complicated that.

"Who knows what types of entities might someday be brokers that aren’t now?" Guida wrote.

Said Smith, "Rather than clarify language that isn’t even law, we encourage the House to reject the crypto provision altogether and work with industry to craft language that keeps the US a crypto innovation leader.”

E-Win – Tax Refund Sale: Up to 20% OF…
5 Tips for Successful HR Project Mana…
How and Where to Buy HXRO Token – An …
Column: Dear Rick Caruso: Running the…


This post first appeared on Passive Income With NFTs, please read the originial post: here
People also like
E-Win – Tax Refund Sale: Up to 20% OFF
5 Tips for Successful HR Project Management
How and Where to Buy HXRO Token – An Easy Step by Step Guide
Column: Dear Rick Caruso: Running the Grove isn’t as easy as running the city