Genre DAO: How an LA Record Label Is Pushing Into the Crypto Era 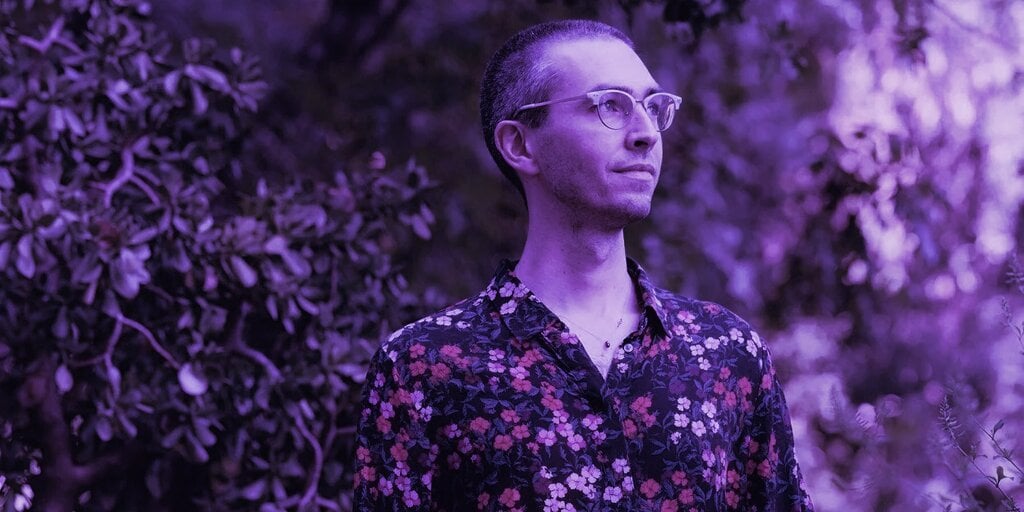 For the past decade, Leaving Records has been responsible for some of the most consistent and diverse experimental music coming out of LA. While the word “genreless” emerged as a catch-all descriptor for a new wave of Gen-Z musicians, Matthew David McQueen—the label’s founder—took the opposite tack: What if we thought about music as “all-genre”? What if, rather than scrubbing the texture from the way we think about and categorize music, we left things messy, and replete with meaning?

Leaving’s “all-genre” ethos has made it a home for meticulous beat wizards (Knxwledge, Ras G), pioneering ambient artists (Laraaji, Ana Roxanne), and all-purpose tinkerers like Julia Holter and M. Geddes Gengras. “The vision always was and forever will be that all-encompassing, all-genre curation,” McQueen told Bandcamp in 2017. “It’s weird and ambiguous and explicitly undefined.”

When NFTs gave blockchain tech a moment in the sun this past winter, McQueen saw an opportunity to expand on that vision. Tapping into a constellation of savvy crypto enthusiasts on social media, McQueen began laying the groundwork for Genre Dao, a kind of formalized community built around its own cryptocurrency: $GENRE.

DAOs are “decentralized autonomous organizations.” There’s a lot of lofty, pseudo-populist rhetoric around what DAOs actually are, but most are essentially just token-gated online communities. Token-holders might be granted voting rights in group polls, or access to a private server on the messaging app Discord. A DAO called Friends with Benefits has hosted private parties for members who meet certain token thresholds. Decrypt has a DAO, too, reserved for owners of the $DCPT token.

In its current form, $GENRE tokens just get you access to a private channel on Leaving Records’ public Discord server, which McQueen sees as a space for potential community events. The channel has already hosted a “hang & DJ sesh” exclusively for token-holders, and “Web 3 education” workshops are planned for the near future. The artwork for one of Leaving Records’ recent releases—a collaboration between the guitarists William Tyler and Luke Schneider—was sourced from a community member on Discord.

“We're just cooking live all the time,” said McQueen. “It's just so early, it's just so fun. Every day there's some other dope collective of people innovating, that we're referencing and then talking to and then bringing into the fold.”

It was McQueen’s friend, the mononymous “Samsonite,” who sent him down the rabbit hole. With a few years’ experience in crypto (he admits he got into it for the “speculation,” though he’s since gravitated toward artier corners of the Ethereum community), Samsonite is now working as a kind of “unofficial consultant” for Leaving Records, guiding McQueen through the often thorny market dynamics that can make the space so unforgiving to newcomers.

Samsonite described a much broader vision for the future of Genre DAO. “The end goal for the short-term, mid-term of the roadmap would be to create our own auction house on the Zora protocol, where we put together a squad—like a DAO—where people could contribute their music NFTs and art to be on our curated auction house, that's curated by this DAO,” he explained. Zora is an NFT platform that offers tools for developers to build their own private marketplaces; Genre DAO token-holders would vote on which artworks to sell as DAO-approved NFTs, and a slice of the profits would be funneled back to the DAO’s “treasury” (code specifically geared for asset management). If your artwork gets chosen, you get a say in what happens to the money.

It’s a little like the concept behind the composer Holly Herndon’s recently announced DAO, which revolves around its own Zora-powered, community-curated auction house.

McQueen also suggested that Genre DAO might work best as a subdivision of Leaving Records, rather than a fully crypto-native label apparatus.

But there’s a long way to go. Many musicians still see cryptocurrency as nothing more than a libertarian wet dream, and an environmental disaster. McQueen mentioned that he “caught a bit of flak” in March, when Leaving Records minted a few audio NFTs on a platform called Catalog. “I just had to deal with it, and feel that, and do it with grace,” he said.

Accessibility is still the biggest obstacle for crypto experiments like Genre DAO. Because the process of acquiring DAO tokens remains onerous and expensive, many DAOs are populated by the same small group of early adopters. It’s not enough to be familiar with Coinbase: getting access to DAO tokens means knowing how to use a digital wallet, like Metamask or Rainbow, and negotiating decentralized exchanges like Uniswap or PancakeSwap, both of which can involve significant fees. At today’s prices, the cost of entry to the Friends with Benefits DAO is a little over $1,000 before fees.

A point in Genre DAO’s favor is that anyone with a crypto wallet can get $GENRE tokens for free, via a public link in Leaving’s Discord server. Rather than asking community members to buy tokens off a decentralized exchange, McQueen and Samsonite used a service called Roll, which allows for relatively user-friendly token transfers. The other advantage of Roll is that it accepts those same free $GENRE tokens as payment for fees built into the Ethereum blockchain. “We're trying to make the barriers easier, or less apparent,” said McQueen.

$GENRE is an ERC-20 token, which means it’s fully interoperable with Ethereum and could potentially generate its own secondary market. If Genre DAO takes off, $GENRE tokens could become a hot commodity. (Roll’s FAQ section promises that tokens built on its platform are “NOT an investment contract or promise of revenue,” but who’s to say?)

For all McQueen’s enthusiasm, Leaving Records isn’t fully abandoning the traditional system just yet. Crypto-backed streaming services and audio NFT experiments are nowhere near supplanting giants like Spotify, and Genre DAO is still mostly just a private chatroom. But McQueen imagines there might be a way for smaller labels to coexist with this new tech. “I've seen a lot that the industry offers and doesn't offer, as far as the traditional models and systems are concerned,” he said. “I've been in the music industry for a while now. And I'm still in it. I’ve got one foot in this traditional model, and one foot out in this space.”

Time will tell whether that split is enough to get smaller artists on board. Despite the backlash against NFTs and the (still significant) barriers to entry, McQueen sees crypto as a crucial building block for a more equitable music industry—a place for all voices, and all genres.

“I wouldn't be fucking around in this space if I wasn't excited about activating and empowering more marginalized artists,” he said. “And I think all of the tools aren’t there already. It’s going to be taking a lot of work, and a lot of discussion and coming together and developing.”


This post first appeared on Passive Income With NFTs, please read the originial post: here
People also like
The Mysterious and Majestic Atacama Desert: A Guide to Visiting this Unforgettable Place
NBA Jam Game Comparison
What would happen to a modern-day Moses in America?
Oskido – Tsa Ma Ndebele Kids ft. Candy
Afloral – Latest Offers
10 Attractive Circle Beard Styles & How to Get Them
She Must Be A Bronx Chick: Woman Uses Taser & Records Man After He Tried To Rape Her On NY Subway!

Genre DAO: How an LA Record Label Is Pushing Into the Crypto Era