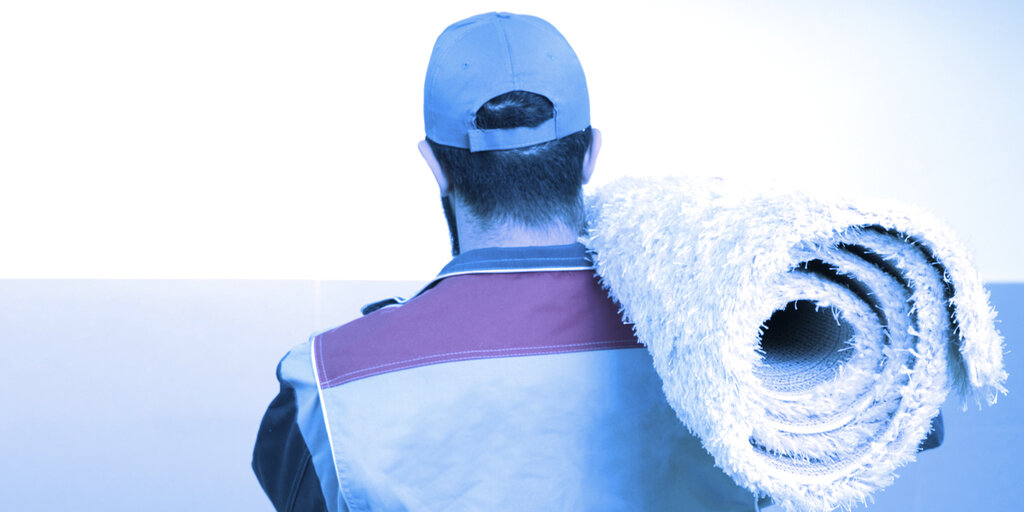 The Telegram group War on Rugs hates rug pulls. So, naturally, it's...trying to pull the rug out on Ethereum.

The watchdog group, which says it's composed of developers and auditors, has created the Rug Ethereum (RETH) Token in retaliation for Ethereum co-founder Vitalik Buterin's decision to transfer millions in Shiba Inu (SHIB) to charity while simultaneously crashing the market for the token.

"Vitalik rug pulled Shiba, innocent investors have been hurt," War on Rugs told Decrypt via direct message the day before launching the token. "He should never be shown as a hero for this."

Binance CEO Changpeng Zhao, who agreed to list the token on Binance's "Innovation Zone," has called SHIB "super high risk." And War on Rugs, which looked at the smart contract, noted earlier this year that Buterin had a very large stake in the token, which meant it could be vulnerable.

A rug pull is a type of scam in which developers abruptly leave a project and take investors' money with them. They're common in the Wild West of decentralized finance (DeFi), where people can go to get crypto loans, earn interest, and trade assets without the help of a financial intermediary—or the insurance such intermediaries provide.

Buterin, however, didn't develop the token—he received it. The creators of the meme token sent trillions of the sub-penny asset to Buterin, who is revered among Ethereum acolytes for his intellectual prowess and his seeming lack of concern for the things money can buy. No Lambos here. Sending the funds to Buterin's wallet lent the project the veneer of legitimacy while also theoretically decreasing the supply because Buterin wouldn't touch the funds.

Theoretically. On Wednesday, Buterin did just that, removing the tokens from a liquidity pool in Uniswap and contributing to a crash in token price. As recently as Tuesday, the price of SHIB was $0.00003394. By Thursday, it had fallen by more than half, to $0.00001563.

"If you consider a 'rug pull' to be quickly, without notice, removing a damaging amount of liquidity from a pool, then I guess that's what Vitalik did," DeFi researcher Chris Blec told Decrypt. "The fact that he never asked for the liquidity in the first place definitely changes things though.
Dogecoin Spinoff SHIB Tanks After Ethereum Founder Vitalik Buterin Dumps Tokens
Blec continued: "The SHIB token project was originally deployed with a specific set of risks and a whole lot of inherent problems. Vitalik didn't change any of that. He simply exposed the token for what it was."

Buterin, meanwhile, was feted in some camps as a hero for shucking off a project he didn't want to be associated with and giving the loot to charity. SHIB is run on the Ethereum blockchain, where its burgeoning popularity contributed to high transaction fees and network congestion, already a problem for the network. Buterin has yet to speak publicly about his motivations.

To War on Rugs, Buterin is the villain.

That ETH is then dumped on DeFi crypto lending marketplace Venus Protocol in favor of Binance Coin. (Venus, unlike many other DeFi lending platforms, is built atop Binance Smart Chain, not Ethereum.) This, says War on Rugs in a Medium post, will ultimately "create constant sell pressure on ETH pairs on BSC," meaning the price of ETH will become depressed. (In a twist, it also sent Vitalik 50% of the 100 quadrillion supply, though it has banned his wallet from using it.)

RETH has more than 2,100 holders since going live this morning, according to blockchain tracker BscScan.

The move adds additional intrigue to a brewing cold war between Ethereum and Binance Smart Chain, a rival network for DeFi applications established by cryptocurrency exchange Binance. Some have argued that Binance benefits from congestion on Ethereum, providing it motivation for listing bulky speculative tokens such as SHIB on its own exchange.

And, now, it will literally be getting the benefits of RETH sales, whether it has the appetite for this rug pull or not.