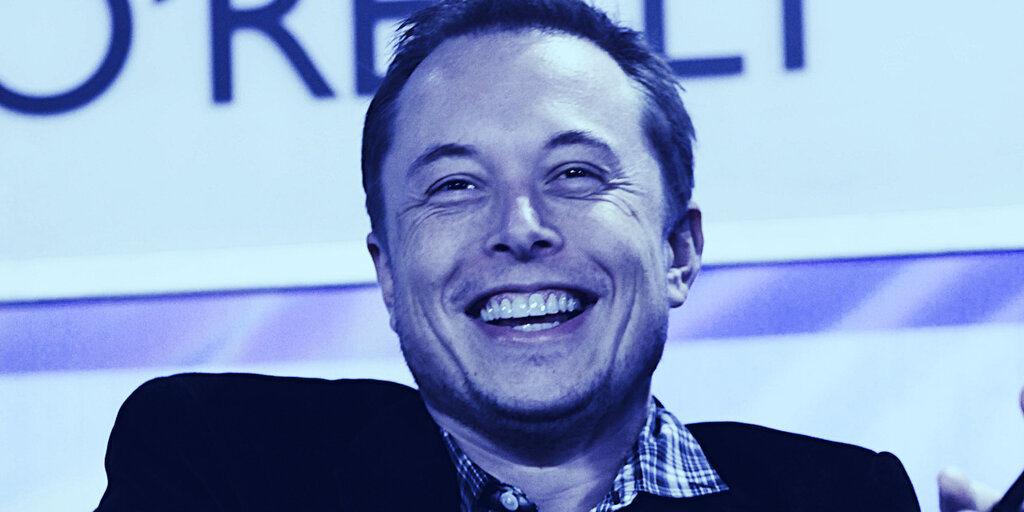 Well, this is awkward. Elon Musk, the CEO of Tesla and the undisputed Technoking of Tesla, hosted Saturday Night Live this evening. And Dogecoin's unofficial spokesperson is making "jokes" about a joke coin.

Musk is neither an actor nor a comedian, but he is entertaining. With plenty to say about space exploration and Thai cave rescues, Musk came into the sketch program as a polarizing public figure/performance artist.

But no one cared about any of that. They just wanted to know: Is he going to use the late-night appearance to pump my bags of Dogecoin?

Well, he initially left that to his mom.

Musk, who has made no secret of his affinity for the joke/meme token, brought his mom onstage for his opening monologue. She told her son she hoped her Mother's Day gift wasn't Dogecoin. To her chagrin, Musk said it would be.

It may not be as valuable by the time she receives it. The price of Doge began dropping immediately after the monologue, showing a red candle and falling from $0.66 to $0.52 in the course of an hour.

Later, on the Weekend Update portion of the show, anchors Colin Jost and Michael Che repeatedly asked a character played by Musk what Dogecoin is. After providing a series of half answers, he finally said, "It's a hustle."

Dogecoin was developed in 2013 as a joke and as a fun way of tipping and donating to cool projects. The returns, however, have been quite serious. After maintaining a consistent value of under a penny for most of its existence, DOGE has shot up over 6,800% since the start of the year. It's now the fourth-largest cryptocurrency by market capitalization with $90 billion worth in crypto wallets.

Musk has played some part in that. His tweets about Dogecoin have a tendency to move the market upward, no doubt because the public views him as a successful businessman for his stewardship of electric car company Tesla. Though Musk has asserted that his tweets are merely jokes—and more recently that people should "invest with caution"—the blue check mark next to his Twitter handle provides an unofficial imprimatur to the project for his 53 million followers.

The Tesla CEO isn't the only one bullish on DOGE. Billionaire investor Mark Cuban, whose Dallas Mavericks accept Dogecoin as payment, recently told Decrypt that he expects the token to reach the $1 mark for the first time.

Mark Cuban: Dogecoin Will Hit $1 And Become a Stablecoin

"DOGE is becoming more of a utility in terms of as a currency," he said at Etheral Summit on Thursday. "You know, you can go to the Mavs shop and you can spend it—and we sell a lot more in Dogecoin than we do in Ethereum or Bitcoin."

Now, if Tesla were to accept Dogecoin, there's no telling how high the token's price might rise. But after a few mentions on SNL, it's already gone farther than anyone imagined.

This article has been updated.

Things to do in Kuwait, Hollywood of …
Is Huobi Global Safe? Huobi Exchange …
Brock Lesnar Beard – How to Grow His …
Flutter Vs. React Native Comparison: …
Afterthoughts Part 3 - Grimdark in Ge…


This post first appeared on Passive Income With NFTs, please read the originial post: here
People also like
Things to do in Kuwait, Hollywood of the Gulf
Is Huobi Global Safe? Huobi Exchange Review, Pros, and Cons
Brock Lesnar Beard – How to Grow His Glorious Beard Style
Flutter Vs. React Native Comparison: Will One Outperform The Other In 2022?
Afterthoughts Part 3 - Grimdark in Genre Fiction
Why Bitcoin Crashed – Is it Safe to Invest In Bitcoin In 2021?