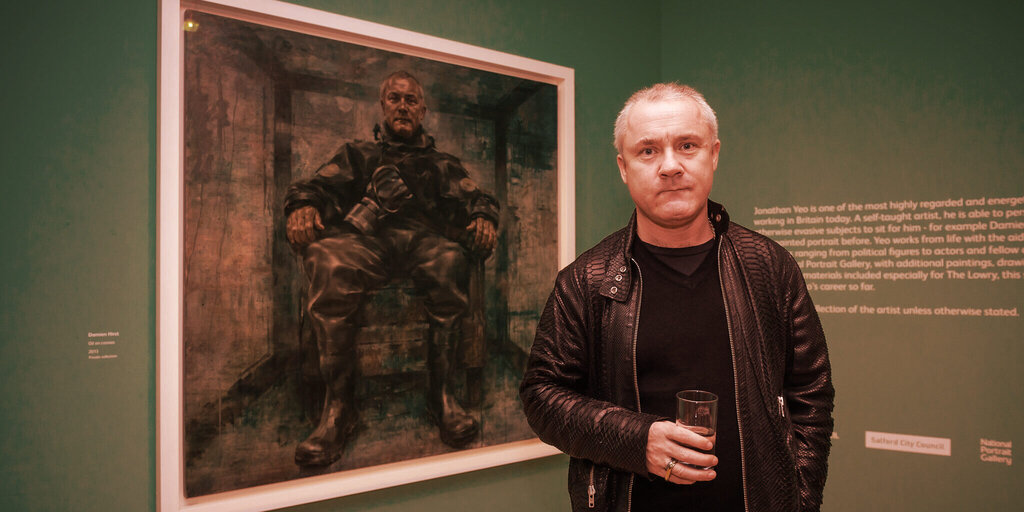 ConsenSys—the Ethereum studio behind MetaMask, Treum, and Infura—announced on Tuesday a new NFT Protocol called Palm, along with an NFT studio for artists and others to spur the protocol’s development. (ConsenSys also funds an editorially independent Decrypt.)

The first artist on board with Palm is Damien Hirst.

NFTs are non-fungible tokens: blockchain-based collectibles that can be assigned to digital artworks (or any files) and treated as proof of ownership. They’ve been selling for eye-popping amounts of money over the past couple months; the market swelled 29x in February alone. Earlier this month, a piece by the digital artist Beeple sold for $69 million at Christie’s auction house. But NFTs have also faced backlash for their connection to energy-intensive proof-of-work blockchains, like the one that underpins Ethereum.

A Burned Up Banksy NFT Just Sold For $382k

Palm has its own token, PALM, and is built from Ethereum as a sidechain, a kind of network that’s interoperable with the mainnet. The sidechain factor has a few benefits, one of which is relative sustainability. Whereas Ethereum is powered by the proof-of-work consensus mechanism, the Palm sidechain runs on proof-of-authority, which dramatically reduces its energy consumption. The Palm sidechain will also allow for tokens to be transferred to the Ethereum mainnet.

The first release on Palm is a collection from Hirst called The Currency Project. Though details are scarce, a press release describes it as 10,000 discrete “works on paper,” each associated with its own NFT.

The protocol is the result of a partnership between ConsenSys, the movie studio Heyday Films, and HENI, a multi-pronged art services company that manages Hirst. HENI previously released Hirst’s The Virtues—a collection of prints for which payment was accepted in Bitcoin and Ethereum.

“I love the crypto world,” said Hirst at the time.

I've made eight cherry blossom prints called The Virtues with @HENIGroup. For the first time I'm accepting Cryptocurrency for payment! You can buy them via the link below. Available until 23:59 PST Wednesday 3rd March. https://t.co/Jcn6z78Y54

His management team does as well.

“If Leonardo were alive now, he would definitely be using NFTs,” HENI founder Joe Hage told Decrypt. “Any artist would not limit their toolkit to express themselves, to make art.”

Palm is also partnering up with Uniswap, the DeFi protocol $MEME, and Protocol Labs, the company behind Filecoin (FIL).


This post first appeared on Passive Income With NFTs, please read the originial post: here
People also like
Top 10 Things to do in Panama, Where to Stay, Important Things You Need to Know
How to Soften a Beard: 6 Effective Tips & Methods
Moorten Botanical Garden in Palm Springs
ICP Price Prediction 2022-2030: Will ICP Reach $1,000?