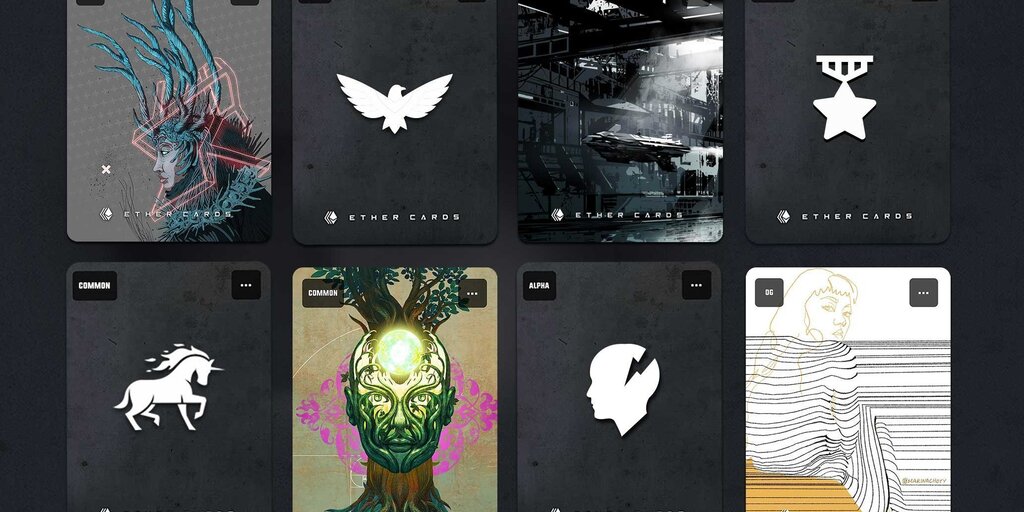 The latest non-fungible token (NFT) crypto collectibles success isn’t tied to a sports league, celebrity, or athlete. It’s an original project called Ether Cards that serves up digital art collectibles with a twist, including randomized “traits” and other potential benefits—and the unique hook seems to have driven demand.

According to the Ether Cards team, the project sold more than 5,000 ETH worth of Founder Series cards in the first 24 hours of sale, beginning March 18, or more than $9 million worth at the time of sale. Ether Cards had already pulled in more than $3.7 million worth of ETH during an earlier presale, and cards remain on sale as of this writing with a tiered price scale that gradually grows as more and more cards of each rarity type are sold.

The Ether Cards name has been in use since 2016, previously for various other initiatives, such as distributing physical cards with Ethereum wallet details and for ETH giveaways. As the NFT market heated up, however—including some $342 million in trading volume across the top three marketplaces in February alone—the creators saw an opportunity to innovate in the space.

An NFT can represent nearly any digital item—for example, a static image, animated gif, a tweet, or a video. For most NFTs, ownership of the verifiably scarce and blockchain-authenticated digital creation is pretty much the extent of the use case.

However, the Ether Cards platform has a built-in, smart contract-powered “traits” system that activates once the cards are minted, bestowing each one with unique differentiators and even special perks for buyers. The Ether Cards team refers to as "NFTs with superpowers."

These can include benefits for future use, including fee waivers and discount coupons for the Ether Cards platform, as well as free future crypto art NFT drops. That’s an added bonus alongside the diverse array of collectible imagery provided by artists such as Anthony D’Onofrio, Dirty Robot, and Nusi Quero.

Buy from Sale and Hold for 30 days = Pristine Card Status

Each card with this 'pristine' status will receive a guaranteed extra Common traithttps://t.co/z3QgtYmYMe

“[The] Founder Series is the culmination of years of work all coming together at the right time,” Ether Cards COO Benjamin Ong told Decrypt. “We felt that NFTs have so much more potential than simply changing hands on the secondary market. We wanted to add extra traits and features to allow creators to unlock significantly more value in their creations, as well as give them the ability to build a direct connection with their collectors.”

The traits system is powered by Chainlink’s Verifiable Randomness Function (VRF) technology, which has been used by blockchain-driven games for random number generation for gameplay elements and in-game item NFTs. According to the Ether Cards team, the cryptographically provable randomness element helps ensure that traits are fairly distributed, and it also helps avoid suspicion of potential manipulation techniques.

"As more and more people start ascribing value to NFTs, we anticipate that the origins of these assets will become more important than ever before. Ether Cards is ahead of the curve here, because they recognize that verifiable randomness is a key element in determining value for collectibles, both in the analog and digital worlds,” Chainlink co-founder Sergey Nazarov told Decrypt. “By adopting Chainlink VRF, the Ether Cards team has been able to provide users with evidence that minting, distributions, and the unique characteristics of their NFTs are fairly generated and are thus genuinely rare.”

Furthermore, Ether Cards’ creators are giving away $5.9 million worth of Basic Attention Token (BAT) as a bonus to buyers, and offering a chance to win rare and potentially very valuable CryptoPunks NFTs. Ether Cards are billed as “membership cards” that bestow potential future benefits—some advertised, some to be detailed later—but come at significant cost.

Already, Ether Cards has beaten the single-day drop records of NFT collectibles platforms such as NBA Top Shot, EulerBeats, and Hashmasks. However, there is a major price disparity between Ether Cards and NBA Top Shot’s pack drops. After all, the most expensive Top Shot pack ever sold for $999, and common base packs sell for as little as $9 apiece. Ether Cards may not have hundreds of thousands of people piling in to try to purchase NFTs, as NBA Top Shot has encountered, but the buyers who do invest are largely big spenders.

The Ether Cards sale will continue into next week, unless the remaining stock sells out sooner. Already, the team is looking ahead to future moves, including opening up the platform to more creators and integrating its functionality into other NFT marketplaces. Oong said that they have also been testing layer-2 scaling solutions, including Polygon Network (ex-Matic), in response to a question about the growing concern over the environmental impact of Ethereum-based NFTs.

"We want @ether_cards to become a lego-like ecosystem that can be integrated with the #NFT space similar to other platforms in the DeFi space” - Andras Kristof, Ether Cards Founder

Otherwise, Ong said the Ether Cards team is “turning into an idea factory” that aims to explore further experimental NFT concepts—and deliver on the promise that membership truly will bring benefits with these pricey tokenized cards. He teased partnerships with other platforms in the Ethereum space, as well as competitions and puzzles built around these NFTs.

“Imagine Ether Cards as very attractive access cards. While they are amazing artistic creations, that is not their principal function,” said Ong. “They are keys to unlock a whole world of interaction with smart contracts all over the Ethereum blockchain.”

Right now, there might be more questions than answers about the full extent of the eventual benefits available to cardholders, but there’s little doubt that the FOMO fueling the NFT boom is also helping to drive Ether Cards’ surging sales.


This post first appeared on Passive Income With NFTs, please read the originial post: here
People also like
Ecosusi – 15% off Cambridge Backpack
Save Cost And Time With This Guide On Hiring Graphic Designers
The Ultimate Beginner’s Guide to Cryptocurrency Tokens
Hollywoodian Beard & How It’ll Transform You Into a Star
Creating a Relationship Contract by Vivienne Diane Neal