The Man Who Raised Bitcoin Billboards Across America 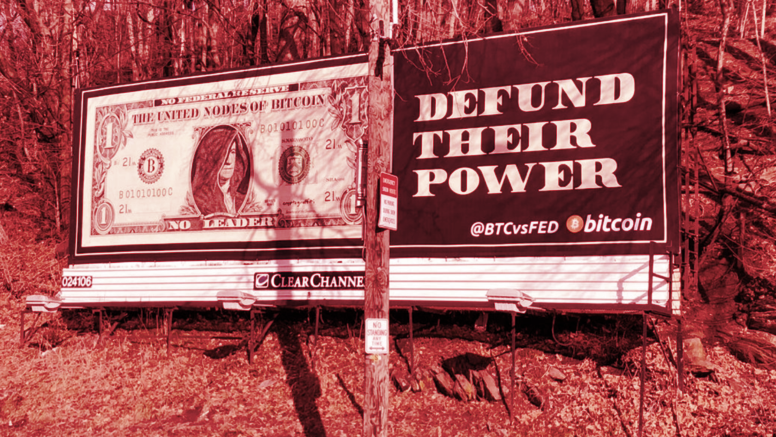 These billboards are spread across all 12 of America’s Federal Reserve Bank cities, including Philadelphia, New York, Boston and Chicago. And each of these billboards propose Bitcoin as an alternative that provides financial stability for people.

“Take The Power Back,” “Opt Out Of This Broken System,” and “A Peaceful Revolution,” the billboards say. The campaign critiques the US government’s policies following the abolition of the gold standard in the 1970s. At the same time, it promotes Bitcoin as an alternative monetary system.

“Without a cap on how much money could be printed, The Federal Reserve was now free to create unlimited quantities of dollars,” Cryptograffiti tweeted, adding, “When the Fed prints money, inflation occurs and prices go up because all dollars are worth less.”

Cryptograffiti’s personal goal is to separate money from the state. And he wants more people to buy into this ideology. To do that, he has turned to art.

Cryptograffiti doesn’t describe himself as a libertarian—although many in the Bitcoin community are—but he acknowledges that the inspiration behind these billboards borrows heavily from libertarian thinking. Especially the idea that the US Federal Reserve should not be printing money ad infinitum.

“The issues with inflation are really at the root of all of this. I found that a lot of people don’t trust the stats they’re given about the economy,” he told Decrypt, adding, “There’s a school of thought that suggests it’s way worse than what we’re told—which I can believe, based on other dissemination of information from the government.”

But Cryptograffiti is not about to take to the streets kicking and screaming about a Bitcoin revolution. Instead, he quietly goes about his business trying to attract newcomers into an alternative reality that has already been built. But Cryptograffiti is not making his art in the hopes that just anyone takes notice. He has a target market in mind: the masses who have yet to embrace the promise of Bitcoin.

Using art to bring Bitcoin to the masses

Cryptograffiti’s billboard art is designed to deliver the message and promise of Bitcoin to working class communities in a way that people can understand.

He is not a programmer or a coder, but he believed in Bitcoin from its earliest years and wanted to do his part to promote its cause. As an artist, Cryptograffiti leaves it up to others to discuss the mechanics of Bitcoin. He focuses instead on trying to capture the essence of Bitcoin.

“The goal with my work is really just to bring some of these concepts and pretty complex jargon, and be able to simplify it a little bit so that more people can understand it,” he told Decrypt.

While institutional money is pouring into Bitcoin at rates never seen before, Cryptograffiti is instead focused on the everyday person. He argues that Bitcoin has yet to reach the people that need it most, either because of where they live, their social circles or their circumstances. “I don’t want the little guy to be left behind; it’s supposed to be the people’s money,” he said.

This kind of initiative is a far cry from billboard campaigns that have targeted high-income areas like London, packed with affluent residents.

Bitcoin is DEAD...
Easy with Coinfloor

Check out our first outdoor advertising campaign on the London Underground on @CoinDesk https://t.co/DPVLC8STrd pic.twitter.com/2SETmbQc3i

In fact, Cryptograffiti has been in the people’s corner for a long time. His Bitcoin billboards seen across America are not the first time he has tried to use Bitcoin to help those in need.

A couple of years ago, Cryptograffiti erected a mural at the Venezuelan border.

His goal was to raise awareness for how refugees could use Bitcoin to their advantage, either as a hedge against Venezuela’s crippling inflation problems, or as a means of leaving the country altogether.

In the mural itself, President Maduro has his mouth covered by the hashtag #AirdropVenezuela, Cryptograffiti’s way of illustrating that Bitcoin can help to alleviate the political and economic repression suffered by Venezuelans under Maduro’s regime.

That mural artwork, seen below, was constructed entirely out of bolivars, Venezuela’s national—and rapidly inflating—national currency. With each Bitcoin donation made in support of the people of Venezuela, one of the 1,000 total bolivars is brought down. According to Cryptograffiti, the mural represents a way for Venezuelans to “literally and figuratively” bring President Maduro down.

The future of Bitcoin and art

Cryptograffiti has already harnessed Bitcoin to support oppressed Venezuelans and to take aim at the US government’s monetary policy, but he’s not done yet.

His work will continue until Bitcoin becomes more accessible to those in need all around the world. “Making it as palatable as possible for people to get into Bitcoin so that it’s more open to the everyday person is what I’d like to see,” he said.

JP Morgan Will Get Involved With Bitcoin if There’s Enough Demand, Says COO

Apart from trying to revolutionize the world of finance, Cryptograffiti is also looking to find ways that Bitcoin can support his peers in the creative industries. Specifically, he has high hopes that Lightning payments will enable other artists to make a living through Bitcoin.

“I’m really bullish on Lightning payments and how micro payments in general can help out artists,” he added.

After all, we all need to get paid.

The Man Who Raised Bitcoin Billboards Across America