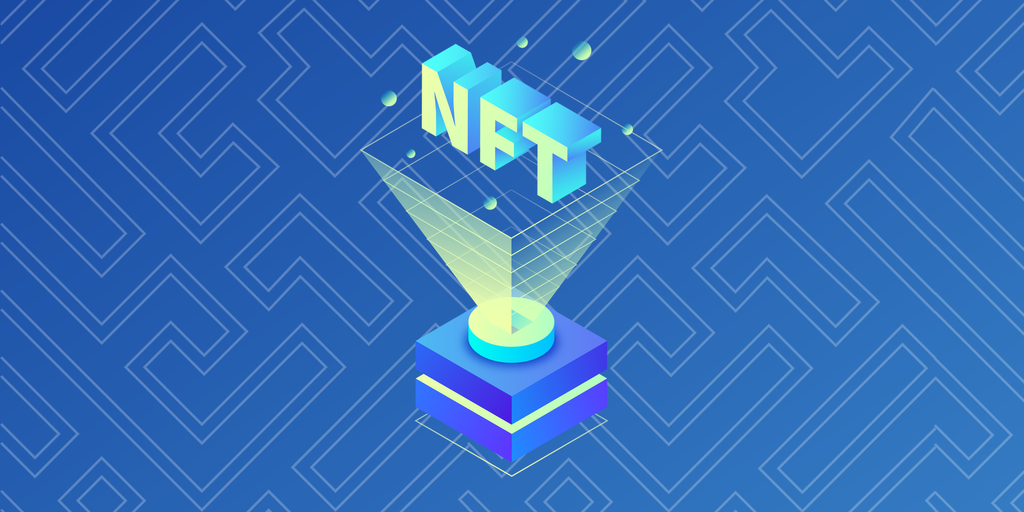 Cryptocurrencies, utility Tokens, security tokens and more… digital assets and their classifications are evolving right alongside cryptographic and blockchain technology.

Non-fungible tokens (NFTs) are another example of the fast-paced change in the industry. In this guide we explore what they are, how they work, and how they're being used.

What are non-fungible tokens?

Non-fungible tokens contain identifying information recorded in their smart contracts. It’s this information that makes each NFT different and as such, they cannot be directly replaced by another token. They cannot be swapped like for like, as no two are alike. Banknotes, in contrast, can be simply exchanged one for another, if they are the same value, there is no difference to the holder.

Bitcoin is a fungible token. You can send someone one Bitcoin and they can send one back, it would still be one Bitcoin. The value might change depending on the time between exchanging Bitcoin, but it's essentially the same. You can also send or receive any part of a Bitcoin, measured in satoshis, as fungible tokens are divisible.

Just now announced in the Telegram group. The very first fancy cat that is extremely rare in the Cativerse, check it: https://t.co/wO2UI87Xgm pic.twitter.com/bYp65BYA3u

The unique information of a non-fungible token, like a CryptoKitty, is stored in its smart contract and immutably recorded on the token’s blockchain. CryptoKitties were originally launched as ERC-721 tokens on Ethereum, but have since migrated to their own blockchain, Flow.

In late 2018, one player was so desperate to move to a "better location" in the virtual game Decentraland that they were ready to say goodbye to 2,800,000 MANA in order to purchase a land piece in-game. At the time of the deal, that was equivalent to over $215,200.

What makes NFTs so special?

Non-fungible tokens have unique attributes; they are usually linked to a specific asset. They can be used to prove the ownership of digital items like game skins right through to the ownership of physical assets.

Other tokens are fungible, in the same way as coins or banknotes. Fungible tokens are identical, they have the same attributes and value when exchanged.

How are non-fungible tokens used?

As well as for crypto-collectibles like CryptoKitties, non-fungible tokens can be used for digital assets that need to be differentiated from each other in order to prove their value, or scarcity. They can represent everything from virtual land parcels to artworks, to ownership licenses.

Non-fungible tokens are not traded on standard cryptocurrency exchanges, instead they are bought or sold on digital marketplaces like Openbazaar or Decentraland’s LAND marketplace.

How do NFTs work?

Tokens like Bitcoin and Ethereum-based ERC-20 tokens are fungible. Ethereum’s non-fungible token standard, as used by platforms such as CryptoKitties and Decentraland, is ERC-721. Non-fungible tokens can also be created on other smart-contract-enabled blockchains with non-fungible token tools and support. Though Ethereum was the first to be widely used, NEO, EOS and TRON now have NFT standards.

Non-fungible tokens and their smart contracts allow for detailed attributes to be added, like the identity of the owner, rich metadata, or secure file links. The potent of non-fungible tokens to immutably prove digital ownership is an important progression for an increasingly digital world. They could see blockchain’s promise of trustless security applied to the ownership or exchange of almost any asset.

As is the challenge of blockchain to date, non-fungible tokens, their protocols and smart contract technology is still being developed. Creating decentralized applications and platforms for the management and creation of non-fungible tokens is still relatively complicated. There is also the challenge of creating a standard. Blockchain development is fragmented, many developers are working on their own projects. To be successful there may need to be unified protocols and interoperability.

How to buy NFT tokens

Non-fungible tokens can be purchased on a huge number of NFT marketplaces, including Rarible, OpenSea, and Enjin Marketplace.

Here's how to get your digital hands on some using Rarible:

Step 1: Head over to the Rarible website and click the 'Connect' button on the top right. From here, select the wallet you want to connect to the platform and log in.

In our example, we'll connect using Metamask, a popular web and mobile wallet. Step 2: Once logged in, search the platform for the NFT you're looking to purchase.

In our example, we'll show how you might purchase 'Hand of Fate' by Jango. The process will be similar regardless of which NFT you wish to purchase (assuming it is available to purchase outright).

Once you've selected the NFT you wish to purchase, click the 'Buy now' button. Step 3: A confirmation window will pop up, asking you to double-check the details of the order.

If you're happy to continue, click the 'Proceed to payment' button to move ahead to the final step. Once it has confirmed, your NFT will be deposited directly to your Ethereum address and will be yours to keep.

Note: you may want to avoid buying your NFTs during peak times—otherwise you may end up with an inordinately high gas fee (as per our example below). Who's making waves in the NFT space?

A major emerging market for NFTs is the creation of digital collectibles—similar to physical trading cards, they derive value from their scarcity. Numerous brands have started licensing their content for use in digital collectibles; one of the companies at the forefront of the movement is Terra Virtua.

Terra Virtua bills itself as the "home of digital collectibles," enabling fans to create a digital "Fancave" where they can display their NFT assets. In September of this year, the company released a series of licensed NFTs inspired by the Godfather film trilogy.

Terra Virtua’s CEO, Gary Bracey, told Decrypt that Terra Virtua’s “core mission is to bring NFT’s to the mainstream,” adding that the use of NFTs was inspired by an idea to bridge the digital world from the real world.
“We started to give a lot more thought about creating something a little more dynamic—the main catalyst being to provide something in the digital world that was not practical in the ‘real’ world,” Bracey added.

While Terra Virtua creates NFTs that are inspired by big brands and Hollywood, other NFT marketplaces deal in art, another major NFT industry.

SuperRare is one of the leading players in the emerging NFT-powered digital art space. As its name implies, SuperRare is all about providing a marketplace for rare and valuable pieces of digital art. On SuperRare, artists’ work is authenticated on the Ethereum blockchain, ensuring value. So far, over 11,000 pieces of artwork have been collected by users, according to the SuperRare website.

Although, according to its website, SuperRare is only onboarding a “small number of hand-picked artists,” it's doing big business. In October 2020, SuperRare reported artwork sales of $4 million on its platform, with artists making $4.6 million after selling over 11,000 artworks.

NFTs are increasingly making their presence felt in the gaming space, too. Decentraland is the world's first fully decentralized game world, built on the ERC-20 token MANA. Users can spend MANA to buy goods, services and 10x10m plots of virtual land, underpinned by the non-fungible LAND token. Decentraland's ICO for the MANA token initially raised $20.7 million and sold out within five minutes. A subsequent auction of LAND saw users spend 161 million MANA to buy virtual plots—around $15 million at current prices.

Why Decentraland is more than just Minecraft with crypto

The game world itself is similar to Minecraft; simple blocky graphics and user-generated creations, which include everything from art galleries (where NFTs can be displayed) to simple games built within the game world.

Decentraland supports a number of different NFTs in addition to LAND, including Axie Infinity and the ever-popular CryptoKitties.

Non-fungible tokens are also making waves in one of cryptocurrency’s most intriguing and innovative spaces, the decentralized finance (DeFi) space.

One example of how NFTs are being used in DeFi is Aavegotchi, an experimental startup funded by DeFi money market Aave. Aavegotchis are NFT crypto-collectibles used in a game universe; every Aavegotchi also has Aave's aTokens staked inside them as collateral, meaning that each one generates yield on Aave. If the owner liquidates their stake, the Aavegotchi disappears.

Buy $GHST to start, then earn it by playing games, voting, and engaging in rarity farming - a novel variant of liquidity mining that rewards the rarest Aavegotchis with $GHST. pic.twitter.com/X5mYRZGqev

Another service that's aiming to bridge the DeFi and NFT communites is Rarible, a decentralized app (or dapp) that enables users to sell digital artwork in the Rarible market.

In July 2020, Rarible launched RARI, a governance token that's used to reward creators and collectors; it can only be earned through active participation on the platform, a process Rarible terms "marketplace liquidity mining."

Welcome $RARI: the first governance token in the NFT space, designed to reward active creators and collectors with a voice in Rarible's future. Make proposals, vote, curate, moderate –– the power is in your hands now.

Rarible’s market is—relative to other marketplaces—huge. According to data published by Dune Analytics, Rarible has been dominating NFT sales since September 2020.

If Rarible continues its dominance of this industry, then DeFi is on pace to become synonymous with non-fungible tokens. The NFT industry may be young, but, for some, it is full of potential.

“The race hasn’t really started yet, this is just the warm-up,” Bracey told Decrypt recently.

The NFT space grew steadily in 2020, with a January 2021 report from DappRadar revealing that daily activity across blockchain games grew 35% during 2020 to around 28,000 daily active unique wallets. In February 2020, NFT marketplace Rarible locked in $1.75 million in seed funding from prominent industry names, including Coinbase Ventures.

The Nine Most Innovative Crypto Artists of 2020

Big money was accompanied by ever-bigger names, as artists and celebrities seized the opportunity to cash in.  Rapper Lil Yachty; Rick & Morty creator Justin Roiland; DJ deadmau5; and YouTuber Logan Paul were among those who launched NFTs.

The future of NFTs

For the time being, much of the attention around non-fungible tokens is focused on artwork, gaming and crypto collectibles. Increasingly, recognizable brands are licensing their content for NFTs; fantasy soccer game Sorare has signed up 100 football clubs to its platform, while the likes of the Smurfs, Minecraft and the BBC's Doctor Who have all been rendered as NFTs.

For gaming, non-fungible tokens could be used to represent in-game items like skins, potentially allowing them to be ported to new games or traded with other players.

Their potential however is much wider with possible application to copyright and intellectual property rights, ticketing, and the sale and trading of video games.

NFTs: A Revolution for Digital Capitalists

Non-fungible tokens add potential to the creation of security tokens, the tokenization of both digital and real-world assets. Physical assets like property could be tokenized for fractional, or shared, ownership. If these security tokens are non-fungible the assets ownership is completely traceable and clear, even if only tokens representing part ownership are sold.

Further application of non-fungible tokens could be certification such as for qualifications, software licensing, warranties, and even birth and death certificates. The smart contract of a non-fungible token immutably proves the identity of the recipient or owner and could be stored in a digital wallet for ease of access and representation. One day, our digital wallets could contain proof of every certificate, license, and asset, we own.