XRP price trend goes bullish; takes a surge of close to 5% amidst a dead crypto-sea

According to the recent trends observed in the Cryptocurrency market, all the big coins in top-10 have been following a consistent sideways trend. However, the 3rd largest coin on the board, XRP has taken a surprising surge of 4.53% today.

Within two hours, the price took a flight from $0.44 to $0.47 as demonstrated by the XRP candlesticks. However, the price came down after it took the highest hike and is currently trading between the two mentioned points. 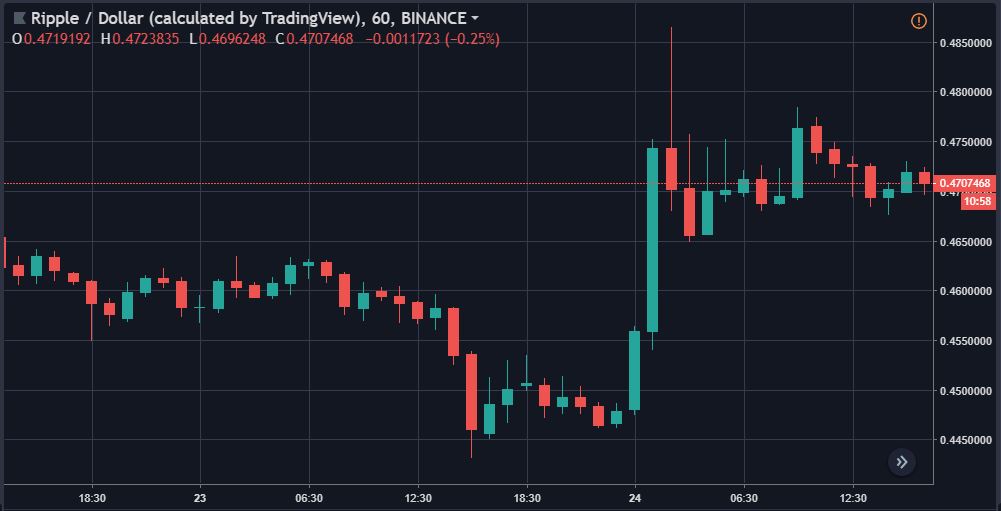 According to a technical analysis conducted today, it was concluded that the price trend for XRP will turn healthier as there was a mild hike seen on charts. Currently, the hike has become a little more aggressive when compared to the previous session.

In the same timeline, the leading cryptocurrency exchange in the USA, Coinbase also announced that it has received approval from the state department to have its own custody program for the cryptocurrency space. Here, it also specified XRP as one of the six cryptocurrency tokens to be included in its Coinbase Custody Trust Company program.

Despite the news of XRP on board for the Coinbase Custody Program, the cryptocurrency has still not been listed on the exchange.

Wayne Modz, a cryptocurrency and blockchain space enthusiast on the news wrote:

“Note that all other assets have been listed on the Coinbase exchange platform for trading activity except for XRP. It is unclear what the extra addition of XRP may mean for the popular exchange.”

“Does that mean that a $XRP listing is on the horizon?”

The post XRP price trend goes bullish; takes a surge of close to 5% amidst a dead crypto-sea appeared first on AMBCrypto.

XRP price trend goes bullish; takes a surge of close to 5% amidst a dead crypto-sea